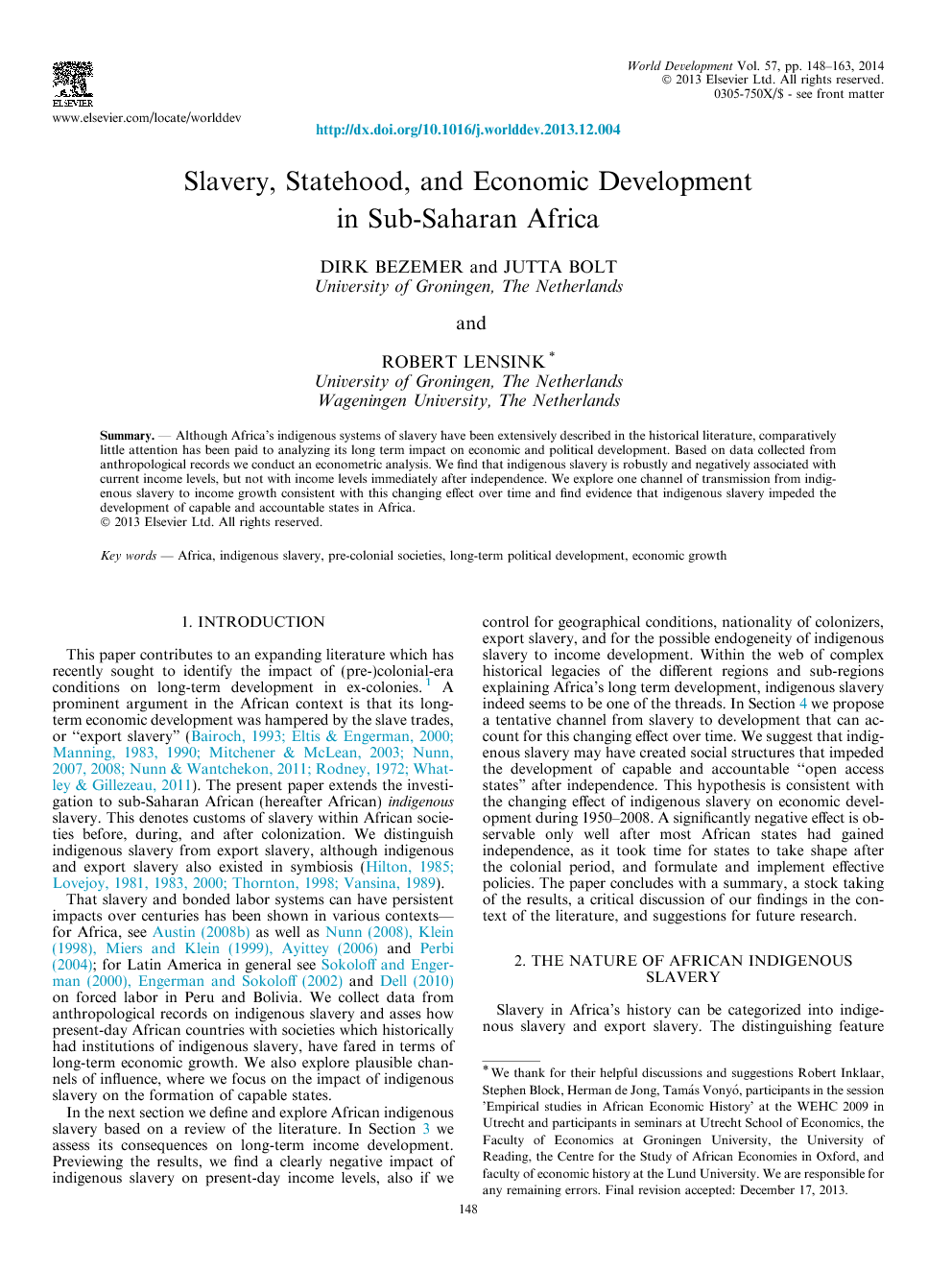 Although Africa’s indigenous systems of slavery have been extensively described in the historical literature, comparatively little attention has been paid to analyzing its long term impact on economic and political development. Based on data collected from anthropological records we conduct an econometric analysis. We find that indigenous slavery is robustly and negatively associated with current income levels, but not with income levels immediately after independence. We explore one channel of transmission from indigenous slavery to income growth consistent with this changing effect over time and find evidence that indigenous slavery impeded the development of capable and accountable states in Africa.

This paper contributes to an expanding literature which has recently sought to identify the impact of (pre-)colonial-era conditions on long-term development in ex-colonies.1 A prominent argument in the African context is that its long-term economic development was hampered by the slave trades, or “export slavery” (Bairoch, 1993, Eltis and Engerman, 2000, Manning, 1983, Manning, 1990, Mitchener and McLean, 2003, Nunn, 2007, Nunn, 2008, Nunn and Wantchekon, 2011, Rodney, 1972 and Whatley and Gillezeau, 2011). The present paper extends the investigation to sub-Saharan African (hereafter African) indigenous slavery. This denotes customs of slavery within African societies before, during, and after colonization. We distinguish indigenous slavery from export slavery, although indigenous and export slavery also existed in symbiosis ( Hilton, 1985, Lovejoy, 1981, Lovejoy, 1983, Lovejoy, 2000, Thornton, 1998 and Vansina, 1989). That slavery and bonded labor systems can have persistent impacts over centuries has been shown in various contexts—for Africa, see Austin (2008b) as well as Nunn, 2008, Klein, 1998, Miers and Klein, 1999 and Ayittey, 2006 and Perbi (2004); for Latin America in general see Sokoloff and Engerman, 2000 and Engerman and Sokoloff, 2002 and Dell (2010) on forced labor in Peru and Bolivia. We collect data from anthropological records on indigenous slavery and asses how present-day African countries with societies which historically had institutions of indigenous slavery, have fared in terms of long-term economic growth. We also explore plausible channels of influence, where we focus on the impact of indigenous slavery on the formation of capable states.