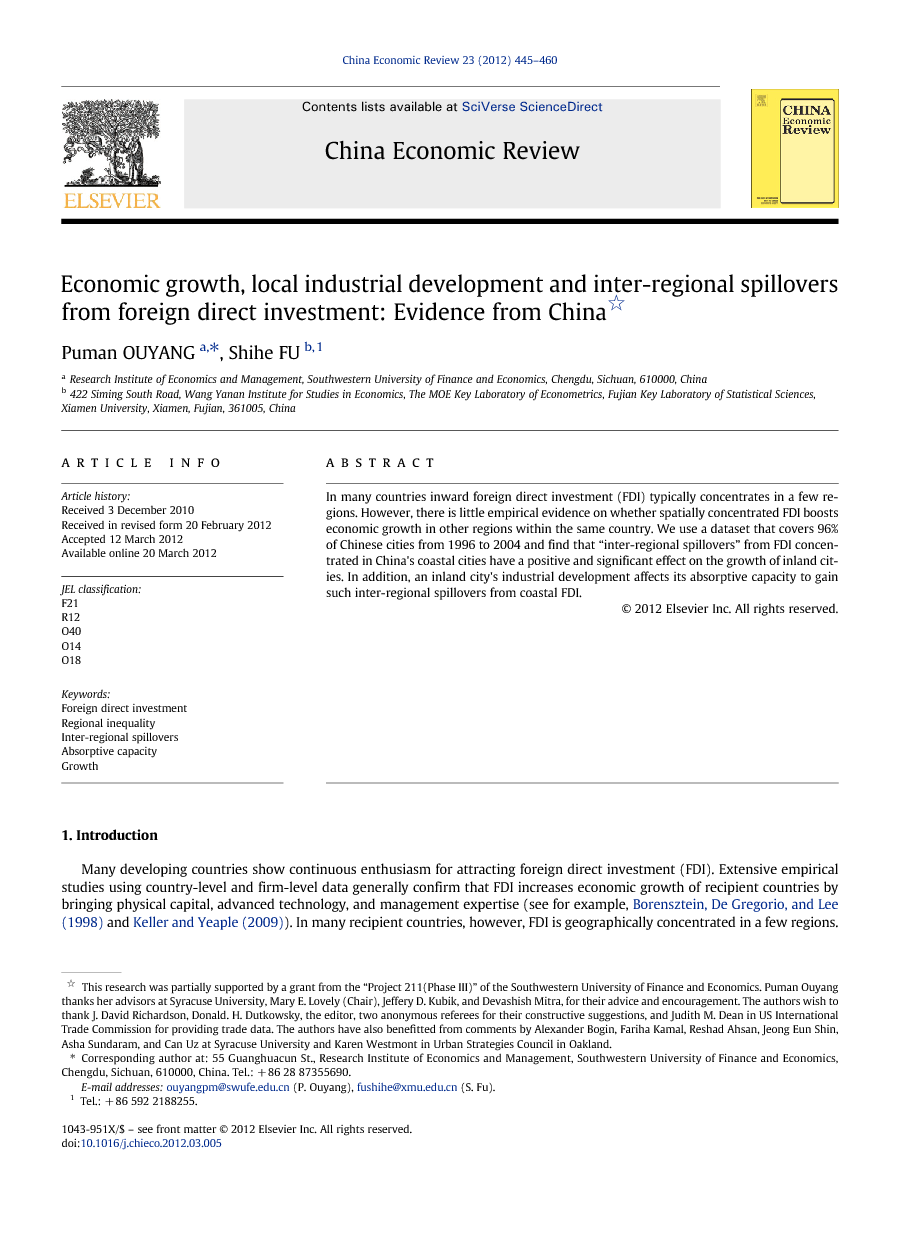 In many countries inward foreign direct investment (FDI) typically concentrates in a few regions. However, there is little empirical evidence on whether spatially concentrated FDI boosts economic growth in other regions within the same country. We use a dataset that covers 96% of Chinese cities from 1996 to 2004 and find that “inter-regional spillovers” from FDI concentrated in China's coastal cities have a positive and significant effect on the growth of inland cities. In addition, an inland city's industrial development affects its absorptive capacity to gain such inter-regional spillovers from coastal FDI.

Many developing countries show continuous enthusiasm for attracting foreign direct investment (FDI). Extensive empirical studies using country-level and firm-level data generally confirm that FDI increases economic growth of recipient countries by bringing physical capital, advanced technology, and management expertise (see for example, Borensztein, De Gregorio, and Lee (1998) and Keller and Yeaple (2009)). In many recipient countries, however, FDI is geographically concentrated in a few regions. In India, between 2001 and 2005, 65.5% of FDI inflows concentrated in only five of the twenty-five states.2 A similar pattern appears in Brazil, Indonesia, Lithuania, and Russia.3 In China, 90% of FDI inflows consistently cluster in the coastal regions that account for 40% of the population and 30% of the land area. This spatial concentration raises the concern that FDI inflows lead to unbalanced regional growth and widen income inequality across regions within an FDI recipient country. This concern is supported by many empirical studies in India (Nunnenkamp & Stracke, 2007) and in China (Fujita & Dapeng, 2001; Jian, Sachs, & Warner, 1996; Lin & Liu, 2000; Ng & Tuan, 2006; Zhang & Zhang, 2003). However, such concern ignores the inter-regional spillover effects through which FDI concentrated in a few regions may contribute to the economic growth of other regions. If the inter-regional spillover effects of FDI exist and are economically significant, then, such concern is overstated. For many developing countries, the growth effects of spatially concentrated FDI on FDI-scarce regions may determine the desirability of a liberal FDI policy. More importantly, a region's absorptive capacity determines its ability to reap the benefit from inter-regional spillovers, and understanding what affect a region's absorptive capacity may have on policy implications for how a poor, FDI-scarce region can gain from concentrated FDI. China provides a useful setting for studying inter-regional spillovers. First, China has a large land area and substantial geographic variations in economic activity. China is landlocked on the west and the north, the inland region; coastal regions are mainly on the east and the south. After decades of industrial development under the centrally planned economy, mining and heavy industries are heavily concentrated in inland provinces while most light industries are concentrated in the coast.4 Second, China also displays apparent FDI spatial concentration and regional income inequality. Coastal regions have geographical advantages for export-oriented FDI (Liu, Wang, & Wei, 2001; Zhang & Felmingham, 2001) and also offer larger domestic markets for foreign firms serving local customers (Amiti & Javorcik, 2008). Furthermore, China's gradual reform policy favored coastal regions by establishing special economic zones and offering preferential tax treatments (Branstetter & Feenstra, 2002). Fig. 1 illustrates the clustering of FDI inflows in China over the period 1996–2004. The most attractive provinces for foreign investors are along the coast. Fig. 2 shows increasing coast-inland disparity in terms of total FDI inflows and FDI per capita, respectively. Coastal provinces enjoy at least 5 times more FDI and 7 times more FDI per capita than inland provinces during the sample years. Fig. 3 provides plots of the standard deviations of FDI inflows and real GDP per capita in the sample and once again reflects the increasing FDI concentration in coastal region and income disparity across China.Finally, we use city level dataset and explicitly address endogeneity issues in estimating inter-regional spillover effects. We assemble a dataset covering 277 Chinese cities during the period 1996–2004.5 Compared with studies based on Chinese provincial data, city-level data have advantages for studying regional spillovers: (1) A city is the unit of analysis in many economic geography theories (Jones, Li, & Owen, 2003; Neary, 2001). With China's transition to a market economy, more economic policies are made and implemented by city governments. (2) More geographically disaggregated data can reduce measurement error (Cai & Wang, 2003); and the city level data also provides a larger sample size and more variations than does the province level sample (Jones et al., 2003). (3) Empirically, a city panel dataset allows us to control for unobservable city-specific factors that affect economic growth or coastal FDI. To further deal with the concern that coastal FDI and inland city's FDI may be endogenous, we adopt the two-stage least square (2SLS) fixed effect model, which will be elaborated in the next section. We divide our sample into two groups: 107 coastal cities and 170 inland cities (Appendix B lists all cities) and construct measures of effective coastal FDI to which an inland city can be exposed, using weights based on the city's distance to coastal FDI. We use the 2SLS fixed effect models to estimate the magnitude of inter-regional spillovers from FDI in coastal cities and to assess whether the development of an inland city's mining and manufacturing industries affects its ability to capture spillovers from coastal FDI. The analysis suggests that a one billion yuan increase in effective coastal FDI is associated with about 0.058 percentage point increase in the GDP growth rate of an inland city; or a one standard deviation increase in effective coastal FDI raises the average GDP growth rate of an inland city from 9.6% to 12.7%. In addition, the extent of FDI inter-regional spillovers depends on inland regions' industrialization. Highly industrialized inland cities gain most spillovers from coastal FDI, while less industrialized inland cities gain much less. We also find that FDI in eastern coast has the largest impact on the growth of inland cities. This may be due to a relatively higher concentration of ordinary trade in eastern provinces. Ordinary trade generates larger inter-industrial linkages with inland regions than does processing trade as the latter is based largely on processing imported inputs. The next section briefly reviews related literature. Section 3 provides a theoretical framework and describes the econometric specification. Section 4 describes the data and discusses the econometric issues. Section 5 presents estimation results and robustness checks; and Section 6 concludes.

Analysis of inter-regional spillovers of FDI can deepen our understanding of the growth impact of FDI. Many developing countries try to keep a balance between fast growth and increasing inequality to maintain political stability. The growth effects of concentrated FDI on FDI-scarce regions may determine the desirability of a liberal FDI policy in developing countries. Using data from 277 Chinese cities over the period of 1996–2004 and applying two-stage least square fixed effect estimation method, this paper estimates the extent to which coastal FDI boosts economic growth in inland regions. We find that inter-regional spillovers from coastal FDI are significant, robust, and economically important: a one standard deviation increase in effective coastal FDI increases the growth rate of the average inland city by 33%. The magnitude of the inter-regional spillover effect depends on the absorptive capacity of an inland city, specifically, on the development of an inland city's mining and manufacturing industries. Without inter-regional spillovers of FDI, inland regions would not have grown as rapidly as they did. East China's FDI, concentrated in ordinary trade industries, has the largest impact on economic growth of inland regions, while inland cities' own FDI inflows seem to have no significant impact on local growth because of the small scales. Our findings suggest that inland firms' interaction with coastal foreign firms in the supply chain is an important channel through which inland regions benefit from inter-regional spillovers from coastal FDI. Other channels, such as internal migration within China, might also be important channels through which technology is transferred to inland regions, which warrants future studies.