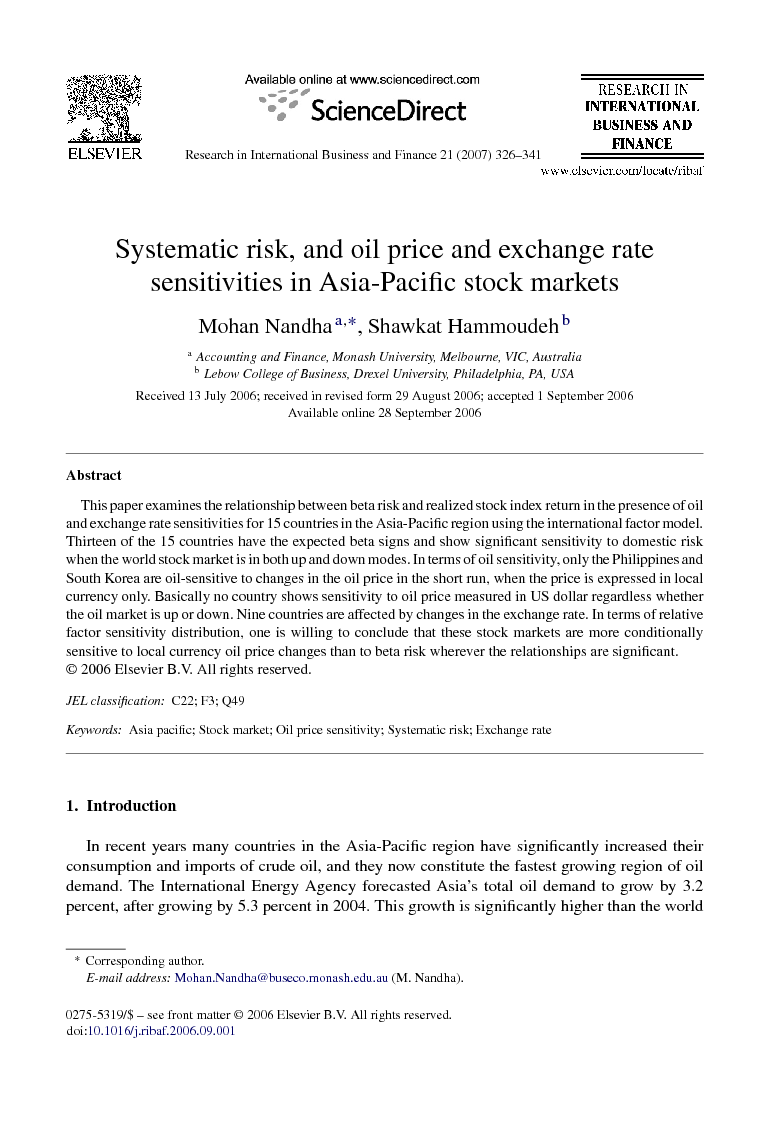 This paper examines the relationship between beta risk and realized stock index return in the presence of oil and exchange rate sensitivities for 15 countries in the Asia-Pacific region using the international factor model. Thirteen of the 15 countries have the expected beta signs and show significant sensitivity to domestic risk when the world stock market is in both up and down modes. In terms of oil sensitivity, only the Philippines and South Korea are oil-sensitive to changes in the oil price in the short run, when the price is expressed in local currency only. Basically no country shows sensitivity to oil price measured in US dollar regardless whether the oil market is up or down. Nine countries are affected by changes in the exchange rate. In terms of relative factor sensitivity distribution, one is willing to conclude that these stock markets are more conditionally sensitive to local currency oil price changes than to beta risk wherever the relationships are significant.

In recent years many countries in the Asia-Pacific region have significantly increased their consumption and imports of crude oil, and they now constitute the fastest growing region of oil demand. The International Energy Agency forecasted Asia's total oil demand to grow by 3.2 percent, after growing by 5.3 percent in 2004. This growth is significantly higher than the world growth of oil demand, which is usually less than 2 percent and was about 2.4 percent in 2004. Some of these countries were also the best stock market performers in the 1990s. However, during this period they experienced grave financial crises when some of their currencies plummeted by more than 50 percent. The Asian-Pacific countries covered in this study have various distinctive characteristics. There are those who are developed such as Australia, New Zealand and Japan, developing such as India, Indonesia, Pakistan, and Sri Lanka, and in between such as Korea, Singapore and Taiwan. Some of these countries are net oil importers, while others such as Malaysia is net oil exporter, and Indonesia is an oil producer and is self-sufficient. Last, but not least, some of these countries’ financial markets were hurt more than others during the 1997 Asian crisis. Therefore, it will be interesting to study the relationship between Asian-Pacific countries’ stock market performance and changes in their own domestic risk and in global factors such as the oil price and foreign exchange rates. Several studies examined the effects of global, country and industry factors on the movements and volatilities of stock returns but not the domestic and global sensitivities under consideration in this paper. Beckers et al. (1995) find that global factors and national factors are of roughly equal importance in explaining the co-movements of stock returns, while national factors are dominant in explaining the stock return volatility. Moreover, Grinold et al. (1989), Drummen and Zimmermann (1992), and Heston and Rouwenhorst (1994) all find that national factors dominate stock return volatilities although industry factors play a significant role. Jones and Kaul (1996) study the impact of global oil shocks on the equity prices in Canada, Japan, UK and the US. They find that only in the case of US and Canada can the impact of the oil shocks on real cash completely account for this reaction. Huang et al. (1996) examine the relationship between daily returns of oil futures and US stock returns, using an unrestricted VAR model. They find that oil futures returns lead some individual oil company stock returns but have negligible impact on the broad-based market indices such as the S&P 500. In an industry-specific study, Faff and Braidford (1999) report significant positive oil price sensitivity of Australian oil and gas, and diversified resources industries. On the other hand, other industries such as paper and packaging, banks and transport seems to exhibit negative sensitivity to oil price hikes. Faff and Braidford (2000) test the role of an oil price factor in explaining the systematic impact on prices in equity markets. Sadorsky (1999) examines the links between the fuel oil prices and stock prices based on US monthly data from January 1947 to April 1996. Using an unrestricted VAR model, that also includes short-term interest rate and industrial production, Sadorsky highlights the importance of oil price in explaining the movements of the other variables. Ciner (2001) finds a non-linear linkages between energy shocks and financial markets. More recently, Aminduh and Wohl (2004) examine the relationship between stock prices and political news related to Saddam Hussein's oil contracts. In other geographical areas, Hammoudeh and Choi (2006) examined the long-run relationship among the Gulf's Arab (GCC) stock markets in the presence of the US oil market, the S&P 500 index and the US Treasury bill rate. They found that the T-bill rate has direct impact on these markes, while oil and S&P 500 have indirect effects. This finding suggests that local and regional factors are dominant in these markets. Choi and Hammoudeh (2007) compared the conditional volatility between the Gulf Arab (GCC) stock markets and volatility of Mexcio and the oil market within a Markov-switching framework. They found that the crisis-ridden Mexico has the highest volatility for the two regimes, followed by the oil market and GCC markets which are isolated by too many government regulations. In this paper we examine the relationship between stock market performance, domestic risk, oil price changes and foreign exchange appreciation or depreciation. Therefore, the objectives of the paper are: • to examine the sensitivity of the short-term stock market returns of fifteen countries in the Asia-Pacific region to domestic risk, particularly when the world stock market is in up and down modes; • to analyse and compare the oil price sensitivity of short-term (weekly) stock market returns across various Asia pacific countries, when the oil price is expressed in both local currency and US dollar; • to compare the relative factor sensitivity distribution between systematic risk and oil price changes; and • to investigate the impact of changes in the exchange rates on stock returns when both the world stock market and the global oil market are in up and down forms. The paper is organized as follows. After this introduction, Section 2 describes the data. Section 3 presents the empirical approach which includes the unit root tests and the international factor model that characterizes the relationship between risk and returns in the presence of changes in prices of global factors. Section 4 provides the results for the 15 Asia-Pacific countries and Section 5 concludes.

This paper examines the relationship between domestic beta risk and realized stock index return in the presence of oil and exchange rate sensitivities for fifteen countries in the Asia-Pacific region using the international factor model. The results emphasize the importance of using beta risk conditional on the movements of the domestic market relative to that of the world market in examining this relationship. The findings also underscore the significance of using oil prices expressed in domestic currency to capture the sensitivity of the individual country stock market to changes in the oil price. In this regard, Philippines and South Koreas show the greatest oil price sensitivity. However, in addition to these two countries India, Indonesia, Malaysia, Singapore, Taiwan and New Zealand show a significant relationship between the domestic stock index returns and changes in the exchange rate when stripped off the oil price.