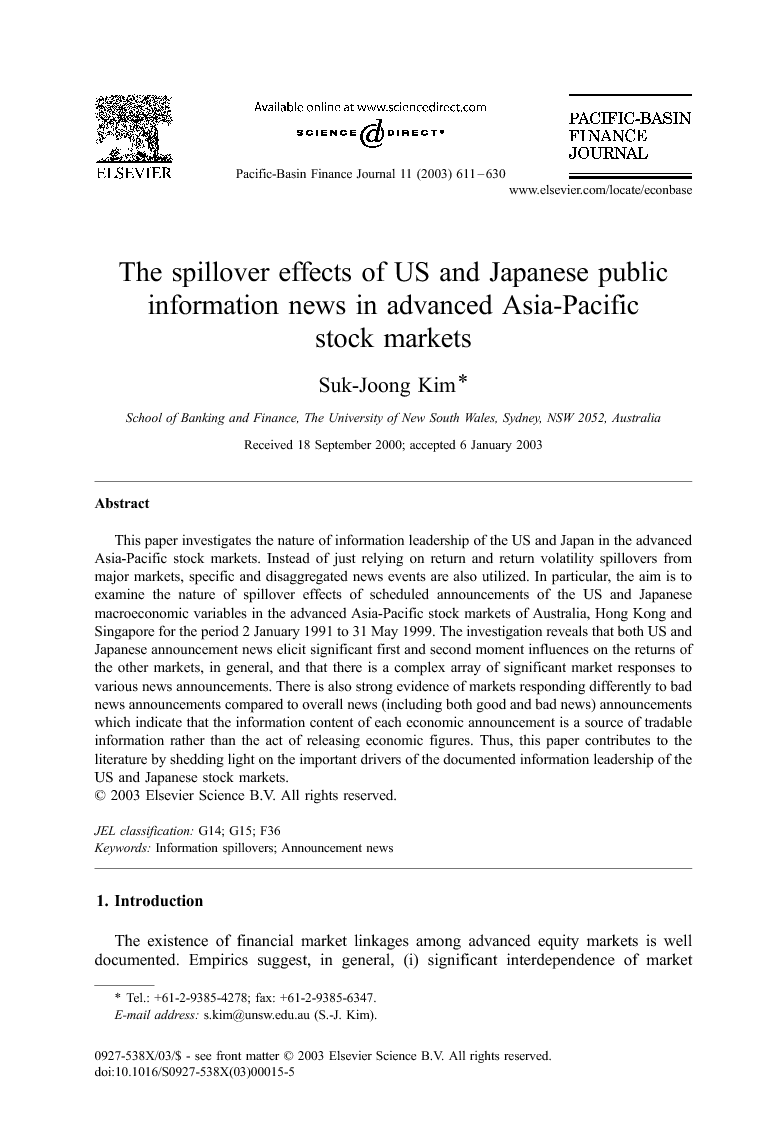 This paper investigates the nature of information leadership of the US and Japan in the advanced Asia-Pacific stock markets. Instead of just relying on return and return volatility spillovers from major markets, specific and disaggregated news events are also utilized. In particular, the aim is to examine the nature of spillover effects of scheduled announcements of the US and Japanese macroeconomic variables in the advanced Asia-Pacific stock markets of Australia, Hong Kong and Singapore for the period 2 January 1991 to 31 May 1999. The investigation reveals that both US and Japanese announcement news elicit significant first and second moment influences on the returns of the other markets, in general, and that there is a complex array of significant market responses to various news announcements. There is also strong evidence of markets responding differently to bad news announcements compared to overall news (including both good and bad news) announcements which indicate that the information content of each economic announcement is a source of tradable information rather than the act of releasing economic figures. Thus, this paper contributes to the literature by shedding light on the important drivers of the documented information leadership of the US and Japanese stock markets.

The existence of financial market linkages among advanced equity markets is well documented. Empirics suggest, in general, (i) significant interdependence of market movements Hamao et al., 1990, Theodossiou and Lee, 1993 and Koutmos and Booth, 1995, (ii) information leadership role of the US market (Eun and Shim, 1989, Arshanapalli and Doukas, 1993 and Connolly and Wang, 2003; and to a less extent, Bae et al., 2003) and (iii) intensification of intermarket linkages after the 1987 global stock market crash (Arshanapalli and Doukas, 1993). Interestingly, researchers report a negligible role of the Japanese market in information leadership among the markets of the US and Western Europe and an absence of significant market linkages between Japan and other major markets.1 Similar patterns exist for Asia-Pacific stock markets in terms of significant first and second moment return spillover effects Janakiramanan and Lamba, 1998, Pan et al., 1999 and Arshanapalli et al., 1995, increasing market linkages and informational leadership of the US after the 1987 crash (Arshanapalli et al., 1995) and for the post-1997 Asian crisis period (Chow, 1999).2 The US market has been providing a significant leading influence in the Asia-Pacific Markets Arshanapalli et al., 1995, Ghosh et al., 1999, Janakiramanan and Lamba, 1998, Liu and Pan, 1997 and Liu et al., 1996. The other major economic influence in the Asia-Pacific region is coming from Japan and the influence of the Japanese stock market movements on the rest of the markets in the region is thus of importance. A number of studies report significant spillover effects from both the US and Japan to the Asia-Pacific markets. These include Cha and Cheung (1998), Liu and Pan (1997) and Ng (2000). However, despite close economic linkages (especially from the late 1980s) between Japan and other regional countries, the Japanese influence had not been very strong until the onslaught of the financial crises in the East Asian countries in 1997 (see Chow, 1999 and Ghosh et al., 1999). Given the leadership role of the US and Japanese stock markets for the Asia-Pacific markets, a logical next step in the analysis of the market linkages would be to investigate the impact of disaggregated information flows from these two major markets. It is of great interest to examine the degree to which different types of information that move the US and the Japanese markets directly affect the Asia-Pacific markets. Stock markets, in general, are influenced by both public and private information. The latter can be an extension of the former in that heterogeneous interpretations of the implication of public information may lead to different responses from market participants. Scheduled announcements of macroeconomic data in the US and Japan inject new information regarding their respective domestic economic conditions to the markets, and to the extent that market participants are caught by surprise and their optimal responses are dependent on their interpretation of the news, significant market movements will result. These include (i) significant adjustments to the current equilibrium prices of financial assets, and either (ii) heightened levels of volatility due to divergent interpretations of the news in the market and the resulting increased volumes of trade, or (iii) lower levels of volatility due to the release of information that reduces the degree of market uncertainty. To the extent that the US and Japanese stock market movements have an influence in the Asia-Pacific markets, these information events are watched carefully for their impact on the market conditions in the region. Significant information content of these announcements will thus directly be factored into the prices in the Asia-Pacific markets. Although there is some empirical evidence of the US announcement news spillover effects in foreign financial markets, they are confined to advanced markets3 and there has been no published research on the news spillover effects of US and the Japanese macroeconomic announcements in the Asian stock markets. This paper aims to address this important research issue by investigating the disaggregated information spillover effects from the US and Japanese scheduled economic announcement events in the advanced Asia-Pacific stock markets of Australia, Hong Kong and Singapore. The main findings of this paper are that: (i) both the US and Japanese announcement news elicit significant first and second moment influences on the returns of the other markets, and that there is a complex array of significant market responses to various news announcements, (ii) there is also strong evidence that markets responded differently to bad news announcements compared to overall news (including both good and bad news) announcements which indicates that the information content of each economic announcement was a source of tradable information rather than an act of information release. The rest of the paper is organized as follows: Section 2 discusses the econometric modeling and data construction issues, Section 3 reports and analyzes the estimation results, and Section 4 concludes this paper.