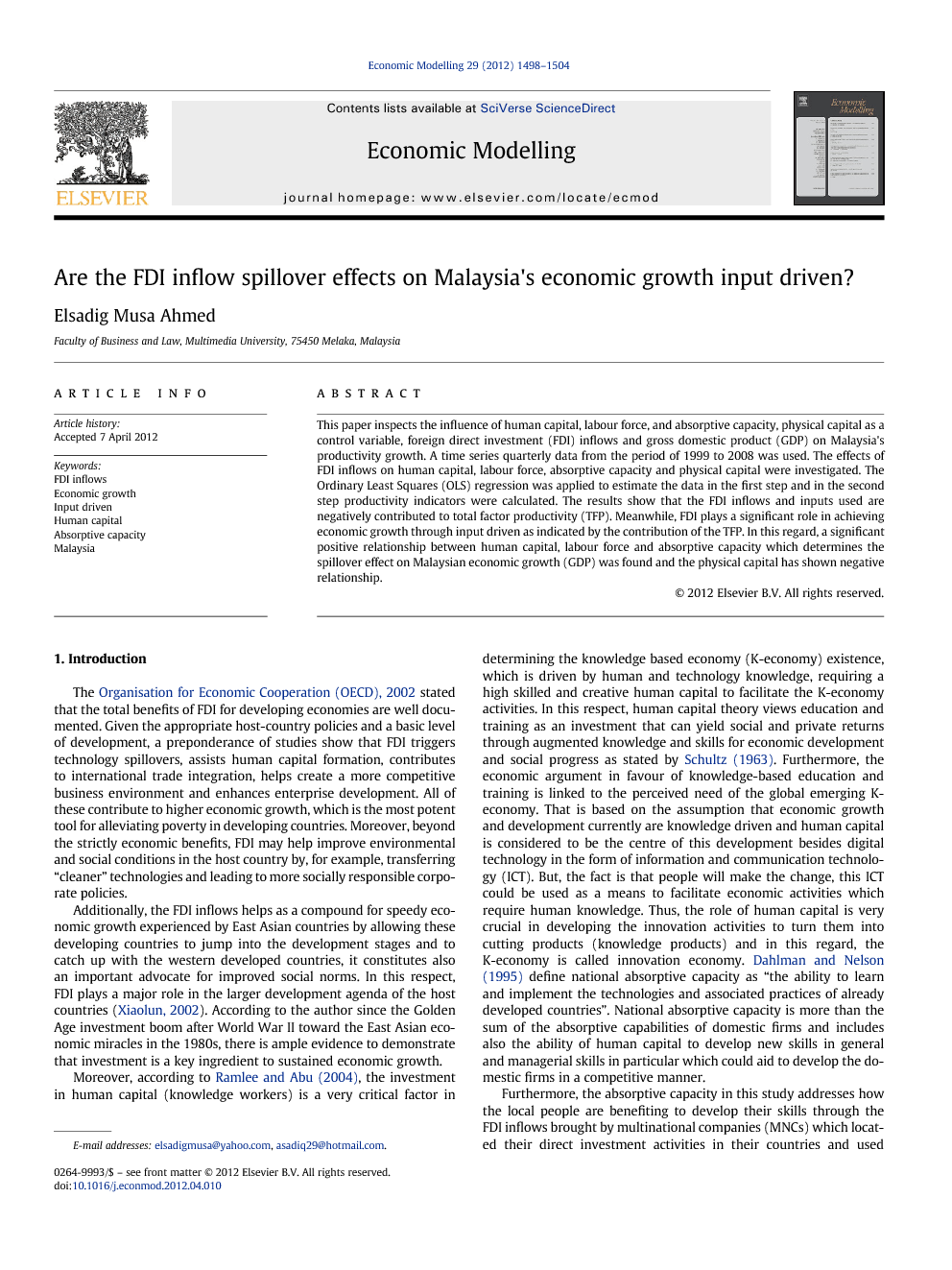 This paper inspects the influence of human capital, labour force, and absorptive capacity, physical capital as a control variable, foreign direct investment (FDI) inflows and gross domestic product (GDP) on Malaysia's productivity growth. A time series quarterly data from the period of 1999 to 2008 was used. The effects of FDI inflows on human capital, labour force, absorptive capacity and physical capital were investigated. The Ordinary Least Squares (OLS) regression was applied to estimate the data in the first step and in the second step productivity indicators were calculated. The results show that the FDI inflows and inputs used are negatively contributed to total factor productivity (TFP). Meanwhile, FDI plays a significant role in achieving economic growth through input driven as indicated by the contribution of the TFP. In this regard, a significant positive relationship between human capital, labour force and absorptive capacity which determines the spillover effect on Malaysian economic growth (GDP) was found and the physical capital has shown negative relationship.

The Organisation for Economic Cooperation (OECD), 2002 stated that the total benefits of FDI for developing economies are well documented. Given the appropriate host-country policies and a basic level of development, a preponderance of studies show that FDI triggers technology spillovers, assists human capital formation, contributes to international trade integration, helps create a more competitive business environment and enhances enterprise development. All of these contribute to higher economic growth, which is the most potent tool for alleviating poverty in developing countries. Moreover, beyond the strictly economic benefits, FDI may help improve environmental and social conditions in the host country by, for example, transferring “cleaner” technologies and leading to more socially responsible corporate policies. Additionally, the FDI inflows helps as a compound for speedy economic growth experienced by East Asian countries by allowing these developing countries to jump into the development stages and to catch up with the western developed countries, it constitutes also an important advocate for improved social norms. In this respect, FDI plays a major role in the larger development agenda of the host countries (Xiaolun, 2002). According to the author since the Golden Age investment boom after World War II toward the East Asian economic miracles in the 1980s, there is ample evidence to demonstrate that investment is a key ingredient to sustained economic growth. Moreover, according to Ramlee and Abu (2004), the investment in human capital (knowledge workers) is a very critical factor in determining the knowledge based economy (K-economy) existence, which is driven by human and technology knowledge, requiring a high skilled and creative human capital to facilitate the K-economy activities. In this respect, human capital theory views education and training as an investment that can yield social and private returns through augmented knowledge and skills for economic development and social progress as stated by Schultz (1963). Furthermore, the economic argument in favour of knowledge-based education and training is linked to the perceived need of the global emerging K-economy. That is based on the assumption that economic growth and development currently are knowledge driven and human capital is considered to be the centre of this development besides digital technology in the form of information and communication technology (ICT). But, the fact is that people will make the change, this ICT could be used as a means to facilitate economic activities which require human knowledge. Thus, the role of human capital is very crucial in developing the innovation activities to turn them into cutting products (knowledge products) and in this regard, the K-economy is called innovation economy. Dahlman and Nelson (1995) define national absorptive capacity as “the ability to learn and implement the technologies and associated practices of already developed countries”. National absorptive capacity is more than the sum of the absorptive capabilities of domestic firms and includes also the ability of human capital to develop new skills in general and managerial skills in particular which could aid to develop the domestic firms in a competitive manner. Furthermore, the absorptive capacity in this study addresses how the local people are benefiting to develop their skills through the FDI inflows brought by multinational companies (MNCs) which located their direct investment activities in their countries and used substantial economic, financial and technological incentives. Moreover, measuring the role of absorptive capacity in determining whether domestic firms benefit from productivity spillovers from FDI should be expressed in the productivity performance of these economies. If the economy is showing technological progress, it means that the economy has transferred the technology of MNCs to domestic firms and has developed human capital capacity that can be relied on to develop a productivity driven economy. This is called as the spillover effect of FDI. Otherwise, it is considered to be an input driven economy which uses the FDI inputs to produce output without showing technical progress and less human capital skills development.

Foreign direct investment (FDI) plays a significant role in Malaysia's economic growth from the hyper markets to electronics and electrical investment. This paper analyses the effects of FDI inflow investment in Malaysian economic growth in terms of GDP and other productivity indicators. In this respect, the econometric result as the first step of the analysis has shown that there is a positive relationship between human capital and absorptive capacity, those tested to know the level of the spillover effects on GDP. Whereas, the influence of the physical capital on Malaysia's economic growth in terms of GDP growth was found to be negative and unidirectional runs were found from FDI to GDP. Moreover, this paper showed that human capital, technology spillover effects and labour force provide the potential effects of FDI to enhance the Malaysian economic growth as an input driven economy. Meanwhile, the contribution of human capital offers the strongest evidence in influencing GDP. In addition the MNEs have played a major role in bringing economic development and employment to Malaysia and many parts of the world. Furthermore, the FDI inflows generate the possible spillovers of technology and knowledge (that determine by the level of absorptive capacity) through the interaction of technology knowledge and local human capital to upgrade their skills and firms to transfer the technology to the economy. This spillover effects might be able to improve the Malaysian firms and human capital development to contribute significantly to Malaysia's economic growth. As expected the production supported by advance technology will educate the skilled labour and eventually improved the productivity and enhance the economic growth to be productivity driven growth that must show technical progress through TFP contribution. However, the abovementioned econometric result has a gap of not providing the productivity indicators and it was only based on the coefficients of the quantities of inputs used. This is showing the homogenous measures of these variables as these were based on different measures. To fill this gap and the gap of growth accounting approach that has doubt in its result of not providing statistical measures to show its reliability. This paper has taken a second step by plugging the coefficients obtained in the modified model to calculate the productivity indicators used in this study. This includes the growth rate of GDP, physical capital, labour force, human capital, FDI and absorptive capacity contributions, which are considered to be input driven indicators. Besides, the calculation of TFP which is indicated as the combined contribution of quality of the factors of production and an indicator of the technological progress that is showing the spillover effects that must transfer the technology to the hosting economy and upgrade the skills of its human capital, which is called productivity driven. Meanwhile, based on TFPG results of this paper, the Malaysian economic growth is considered to be input driven and highly dependent on FDI investment. This is indicating that the FDI spillover effects had insignificant impact on Malaysian economy, that was taken place on developed nations in general and in Japan and South Korea in particular. To achieve the new economic model goals in turning the Malaysian economy to be a high income and knowledge driven economy by 2020, the quality of the workforce (human capital) will make the difference in creating productivity driven economy. The human factor plays an essential role to interact with the technology to create cutting edge technology and to facilitate the economic activities to create new values to make the difference in the Malaysian economic fundamentals. This is what so called the FDI spillover effects. Finally, the concept of one Malaysia will become reality if the Malaysian pupils integrated in one national school system instead of the current race based schools.