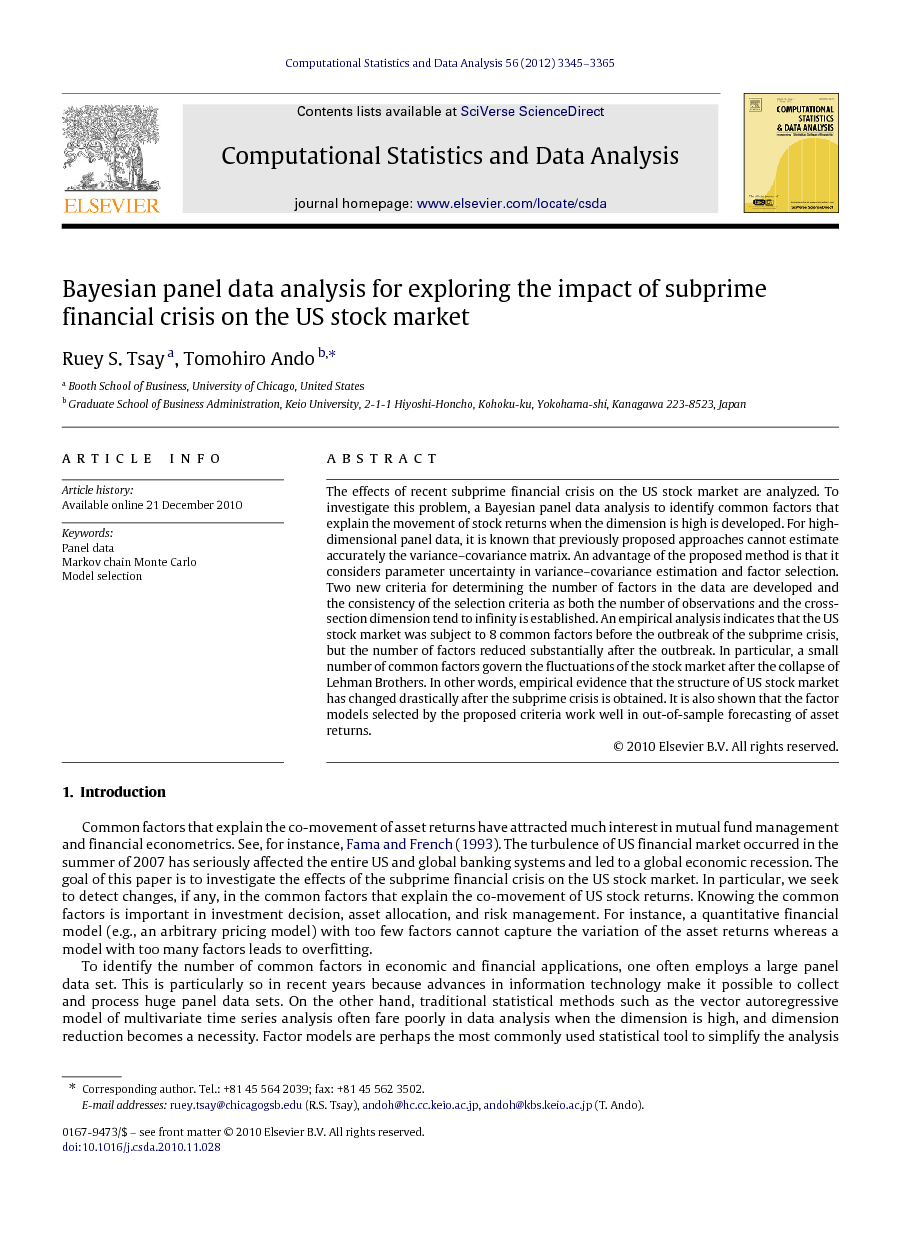 The effects of recent subprime financial crisis on the US stock market are analyzed. To investigate this problem, a Bayesian panel data analysis to identify common factors that explain the movement of stock returns when the dimension is high is developed. For high-dimensional panel data, it is known that previously proposed approaches cannot estimate accurately the variance–covariance matrix. An advantage of the proposed method is that it considers parameter uncertainty in variance–covariance estimation and factor selection. Two new criteria for determining the number of factors in the data are developed and the consistency of the selection criteria as both the number of observations and the cross-section dimension tend to infinity is established. An empirical analysis indicates that the US stock market was subject to 8 common factors before the outbreak of the subprime crisis, but the number of factors reduced substantially after the outbreak. In particular, a small number of common factors govern the fluctuations of the stock market after the collapse of Lehman Brothers. In other words, empirical evidence that the structure of US stock market has changed drastically after the subprime crisis is obtained. It is also shown that the factor models selected by the proposed criteria work well in out-of-sample forecasting of asset returns.

This paper analyzed the effect of recent subprime financial crisis on the US stock market. To this end, we developed a new Bayesian panel data analysis method for identifying the common factors for stock returns when the dimension involved is high. Using Bayesian analysis, we proposed two criteria for selecting the number of factors in a panel data set. Under certain conditions, we established the consistency of the criteria when both the sample size TT and the cross-section dimension NN approach infinity. For finite samples, our simulation results showed that the proposed criteria outperform those proposed by Bai and Ng (2002), especially when the number of observations and the cross-section dimension are small. In addition, the PDCpPDCp criterion also outperforms the method of Onatski (2005) in most cases considered in our simulation study, even though the latter works reasonably well in most cases. The PDCpPDCp criterion seems to be more robust when there are heteroscedasticity, serial correlation, and fat-tailed features in the data. Our empirical analysis indicates that the US stock market was subject to 8 common factors before the outbreak of the subprime crisis, whereas the number of common factors reduced substantially after the outbreak. After Lehman’s failure, a small number of common factors has been governing the fluctuations of stock market. We found empirical evidence that the structure of US stock market has changed drastically after the subprime crisis. Finally, we also showed that the proposed method performs well in out-of-sample forecasting.