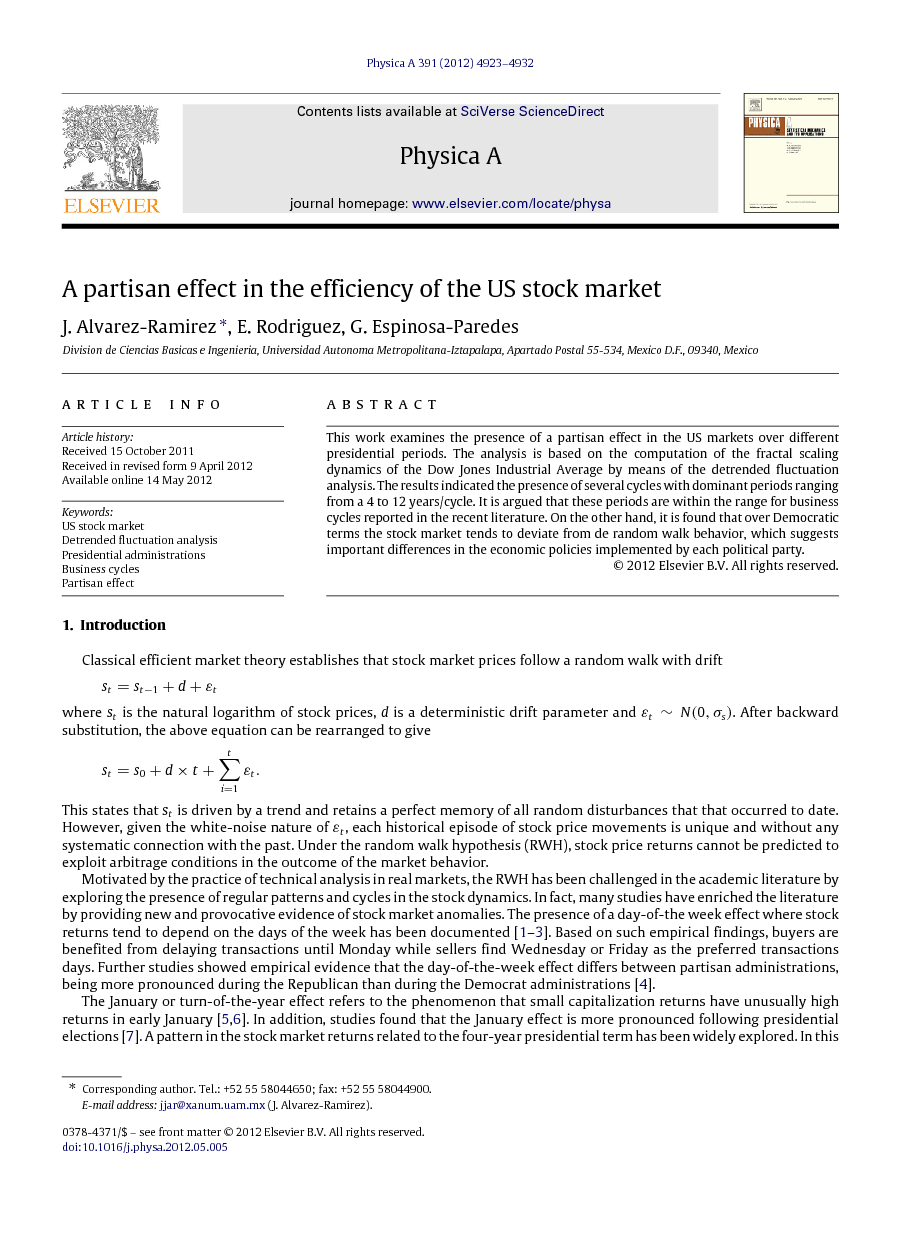 This work examines the presence of a partisan effect in the US markets over different presidential periods. The analysis is based on the computation of the fractal scaling dynamics of the Dow Jones Industrial Average by means of the detrended fluctuation analysis. The results indicated the presence of several cycles with dominant periods ranging from a 4 to 12 years/cycle. It is argued that these periods are within the range for business cycles reported in the recent literature. On the other hand, it is found that over Democratic terms the stock market tends to deviate from de random walk behavior, which suggests important differences in the economic policies implemented by each political party.

Classical efficient market theory establishes that stock market prices follow a random walk with drift st=st−1+d+εtst=st−1+d+εt Turn MathJax on where stst is the natural logarithm of stock prices, dd is a deterministic drift parameter and εt∼N(0,σs)εt∼N(0,σs). After backward substitution, the above equation can be rearranged to give View the MathML sourcest=s0+d×t+∑i=1tεt. Turn MathJax on This states that stst is driven by a trend and retains a perfect memory of all random disturbances that that occurred to date. However, given the white-noise nature of εtεt, each historical episode of stock price movements is unique and without any systematic connection with the past. Under the random walk hypothesis (RWH), stock price returns cannot be predicted to exploit arbitrage conditions in the outcome of the market behavior. Motivated by the practice of technical analysis in real markets, the RWH has been challenged in the academic literature by exploring the presence of regular patterns and cycles in the stock dynamics. In fact, many studies have enriched the literature by providing new and provocative evidence of stock market anomalies. The presence of a day-of-the week effect where stock returns tend to depend on the days of the week has been documented [1], [2] and [3]. Based on such empirical findings, buyers are benefited from delaying transactions until Monday while sellers find Wednesday or Friday as the preferred transactions days. Further studies showed empirical evidence that the day-of-the-week effect differs between partisan administrations, being more pronounced during the Republican than during the Democrat administrations [4]. The January or turn-of-the-year effect refers to the phenomenon that small capitalization returns have unusually high returns in early January [5] and [6]. In addition, studies found that the January effect is more pronounced following presidential elections [7]. A pattern in the stock market returns related to the four-year presidential term has been widely explored. In this market pattern, low returns in the first two years and high returns in the last two years of a president’s term are economically and statistically significant [8], [9] and [10]. Some studies have revealed that this presidential cycle is persistent for both Democrat and Republican administrations [11] and [12]. Partisan effects in the presidential cycle have also been documented. Simple tests of mean differences found that fixed-income securities (e.g., TT-bills, long-term government bonds, etc.) exhibit higher returns under Republican presidents than under Democrat presidents [10]. These results suggest that there is a systematic and permanent difference in economic (e.g., inflation and unemployment) policies between the two parties [13]. Analyses of all presidential elections since 1880 also revealed that electing a Republican president raises equity valuations by 2%–3%, and that since Ronald Reagan, Republican presidents have tended to raise bond yields [14]. Empirical evidences like the day-of-the-week effect and the presidential cycles seem to suggest that the market is inefficient in the sense that trading strategies could be developed to systematically beat the market. That is, the stock market contains deviations from the RWH which, under suitable processing information strategies, can be exploited to realize excess returns against the market. Following the proposal of behavioral finance, anomalies in financial market dynamics should reflect not only utilitarian characteristics (e.g., risk, profit, etc.), but also psychological and socio-political sentiments [15]. Within this framework, departures from the RWH should be expected since the different financial markets reflect the social, political and economic conditions of a particular historic episode. The objective of this study is to examine the partisan effect in the RWH for the US stock markets. To this end, the historic Dow Jones Industrial Average (DJIA) daily stock return was analyzed by means of the detrended fluctuation analysis [16]. The empirical analysis indicated that the US stock market tends to be more efficient, following a random walk behavior, under Republican administrations than under Democrat administrations. That is, Democrats push the DJIA away from efficiency, while Republicans do the opposite. This suggests that the efficiency of the market over different presidential administrations may influence strategies investors would employ with regard to the timing of purchases and sales.

The random walk hypothesis (RWH) of price returns is a proxy for testing the informational efficiency of stock markets. Empirical evidence based on a fractal analysis of the DJIA showed that the US markets contain patterns that deviate the stock market behavior from the RWH. Such deviations include different cycles that can be attributed to business conditions, and a partisan effect where the informational market efficiency is improved under Republican administrations and reduced under Democrat administrations. In principle, well-informed investors can exploit the cyclic and partisan patterns to accommodate profit within a diversified portfolio. For instance, it seems that investing in small stocks should be more advantageous under Democrat terms than under Republican terms. Overall, the results in this paper have shown that the stock market retains information on business conditions and economic policies implemented by a particular presidential term.