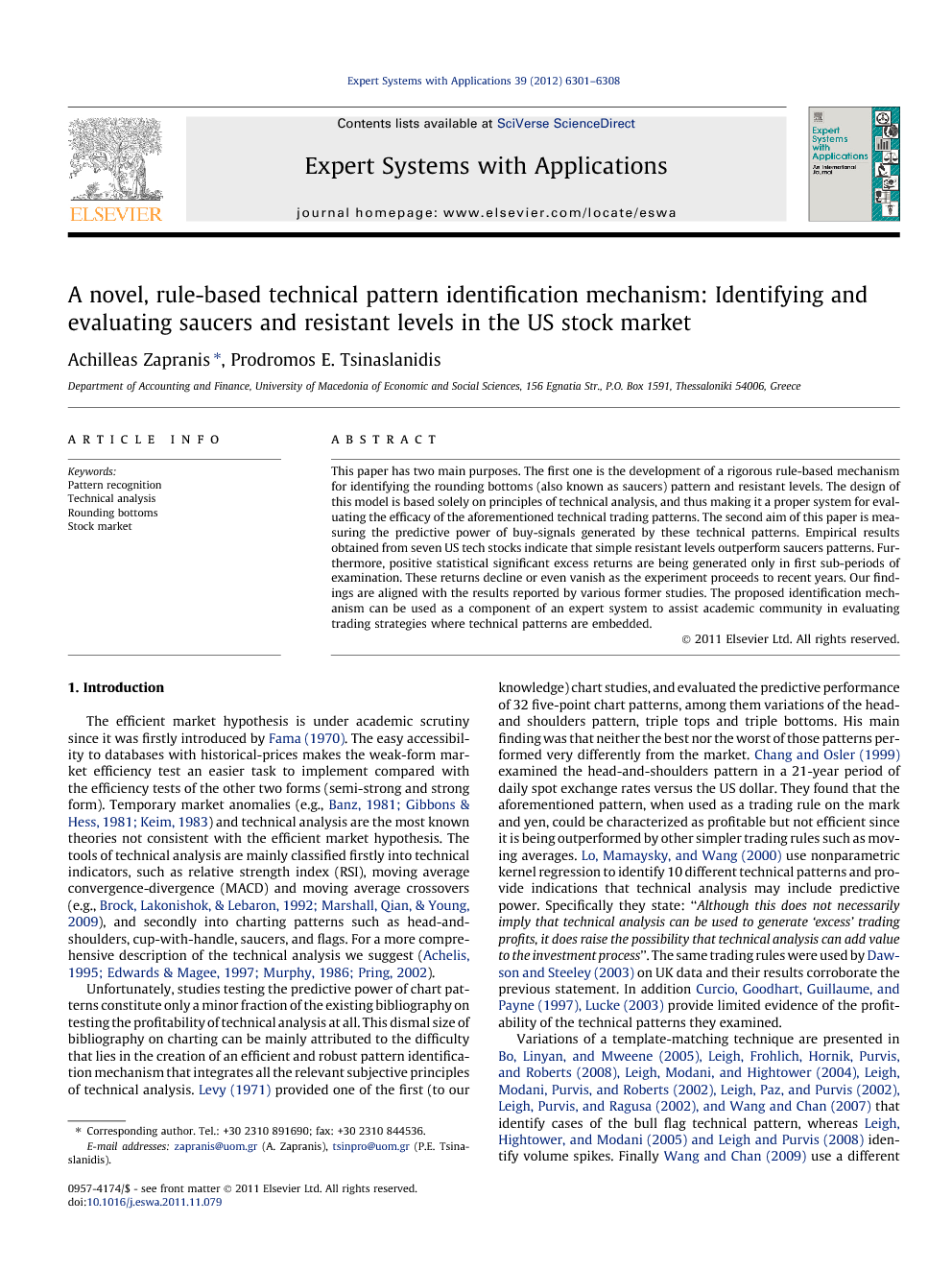 This paper has two main purposes. The first one is the development of a rigorous rule-based mechanism for identifying the rounding bottoms (also known as saucers) pattern and resistant levels. The design of this model is based solely on principles of technical analysis, and thus making it a proper system for evaluating the efficacy of the aforementioned technical trading patterns. The second aim of this paper is measuring the predictive power of buy-signals generated by these technical patterns. Empirical results obtained from seven US tech stocks indicate that simple resistant levels outperform saucers patterns. Furthermore, positive statistical significant excess returns are being generated only in first sub-periods of examination. These returns decline or even vanish as the experiment proceeds to recent years. Our findings are aligned with the results reported by various former studies. The proposed identification mechanism can be used as a component of an expert system to assist academic community in evaluating trading strategies where technical patterns are embedded.

The efficient market hypothesis is under academic scrutiny since it was firstly introduced by Fama (1970). The easy accessibility to databases with historical-prices makes the weak-form market efficiency test an easier task to implement compared with the efficiency tests of the other two forms (semi-strong and strong form). Temporary market anomalies (e.g., Banz, 1981, Gibbons and Hess, 1981 and Keim, 1983) and technical analysis are the most known theories not consistent with the efficient market hypothesis. The tools of technical analysis are mainly classified firstly into technical indicators, such as relative strength index (RSI), moving average convergence-divergence (MACD) and moving average crossovers (e.g., Brock et al., 1992 and Marshall et al., 2009), and secondly into charting patterns such as head-and-shoulders, cup-with-handle, saucers, and flags. For a more comprehensive description of the technical analysis we suggest (Achelis, 1995, Edwards and Magee, 1997, Murphy, 1986 and Pring, 2002). Unfortunately, studies testing the predictive power of chart patterns constitute only a minor fraction of the existing bibliography on testing the profitability of technical analysis at all. This dismal size of bibliography on charting can be mainly attributed to the difficulty that lies in the creation of an efficient and robust pattern identification mechanism that integrates all the relevant subjective principles of technical analysis. Levy (1971) provided one of the first (to our knowledge) chart studies, and evaluated the predictive performance of 32 five-point chart patterns, among them variations of the head-and shoulders pattern, triple tops and triple bottoms. His main finding was that neither the best nor the worst of those patterns performed very differently from the market. Chang and Osler (1999) examined the head-and-shoulders pattern in a 21-year period of daily spot exchange rates versus the US dollar. They found that the aforementioned pattern, when used as a trading rule on the mark and yen, could be characterized as profitable but not efficient since it is being outperformed by other simpler trading rules such as moving averages. Lo, Mamaysky, and Wang (2000) use nonparametric kernel regression to identify 10 different technical patterns and provide indications that technical analysis may include predictive power. Specifically they state: “Although this does not necessarily imply that technical analysis can be used to generate ‘excess’ trading profits, it does raise the possibility that technical analysis can add value to the investment process”. The same trading rules were used by Dawson and Steeley (2003) on UK data and their results corroborate the previous statement. In addition Curcio et al., 1997 and Lucke, 2003 provide limited evidence of the profitability of the technical patterns they examined. Variations of a template-matching technique are presented in Bo et al., 2005, Leigh et al., 2008, Leigh et al., 2004, Leigh et al., 2002, Leigh et al., 2002, Leigh et al., 2002 and Wang and Chan, 2007 that identify cases of the bull flag technical pattern, whereas Leigh et al., 2005 and Leigh and Purvis, 2008 identify volume spikes. Finally Wang and Chan (2009) use a different from the aforementioned template grid in order to identify rounding bottoms and rounding tops. This study presents a novel rule-based approach for identifying the rounding bottoms technical pattern. The uniqueness of this study resides in the manner that principles of technical analysis are incorporated in the identification mechanism. To be more precise from different official descriptions of the saucers, and with simple geometric rules, a new rule-based identification mechanism is developed which extracts a great proportion of subjectivity included in technical pattern recognition process. The advantage of this method is that it is simple and it can identify simultaneously patterns of different size (both width and depth) where in case of template-matching techniques the user has to define the size of the template window before the identification process starts. This paper has two main objectives. The first is the presentation of the identification mechanism. The second is the evaluation of the rounding bottoms pattern’s forecasting power, and not the discovery of a new profitable trading rule. For this reason no optimization based on generated excess returns is utilized. The rest of this paper is organized as follows. Section 2 describes the design of the rule-based identification mechanism. Section 3 explains the trading rules employed. Section 4 presents the data and the empirical results. Finally Section 5 makes a conclusion.

This study develops a novel rule-based mechanism for the identification of the rounding bottoms pattern. Previous studies on this theme use template matching techniques which can also be used for the identification of other technical patterns. In template matching techniques the user has to set specific weights in the template’s grid before the identification of a pattern. These weights in some cases are set somehow arbitrarily and the process embeds a level of subjectivity. Of course the subjective nature of technical analysis is a fact. But to our point of view, in order to evaluate the predictive power of technical analysis we have to start from scratch and look for the descriptions of the technical patterns reported in various technical manuals. As technical indicators have their own formulas, technical patterns have their own descriptions. These descriptions have to be coded proper in order to test these patterns’ predictive power. The novelty of this study lies in the manner the identification mechanism is designed. Core principles of technical analysis are employed for the development of this mechanism. Furthermore this rule-based process outperforms previous studies in a way that it identifies patterns of various sizes at once. In studies of template matching techniques the size of the pattern was pre-specified and standard. In addition, by the design of this rule, when setting the fit value equal with zero, the user is able to identify resistant levels. Finally non-synchronous trading, buying runs, and data mining problems were reduced by the way this experiment was set. A drawback of this study is that it ignores volume of transactions which is very important for the confirmation of a technical pattern. The efficiency of a market is also a matter of time. The empirical results of this study indicate that the saucers pattern and resistant levels do not produce systematic abnormal returns for the whole sample period. Indications of positive returns can be eliminated by transaction cost. Indications of inefficiencies can be tracked only in the first sub-period of our dataset and only when short-term holding periods are used. In that case resistant levels outperform saucers patterns since they generate positive and statistical significant excess returns with a greater frequency. The presence of positive returns in the first sub-period are aligned with the results reported by various studies (e.g., Olson, 2004, Sullivan et al., 1999 and Sullivan et al., 2003) according to which trading rules generate positive returns before the 1990s, but these profits decline or even vanish in the following years. The explanation may lie in the words of Timmermann and Granger (2004) who conclude: “Ultimately, there are likely to be short-lived gains to the first users of new financial prediction methods. Once these methods become more widely used, their information may get incorporated into prices and they will cease to be successful”. Furthermore with the use of two different sets of holding periods we found that the information obtained from saucers and resistant levels is valuable only at a small time interval immediate after the pattern is being identified. This finding is consistent with Wang and Chan (2007) who state: “the shorter holding periods were associated with higher return”. In addition Lucke (2003) mentions: “the strongest evidence for excess profitability is found for the shortest holding period”. The rule-based mechanism proposed in this study can be seen as an expert system in order to test the predictive power of technical analysis and thus test the weak-form efficiency of various financial markets. The “mirrored” methodology can also be used for identifying rounding tops and support levels.