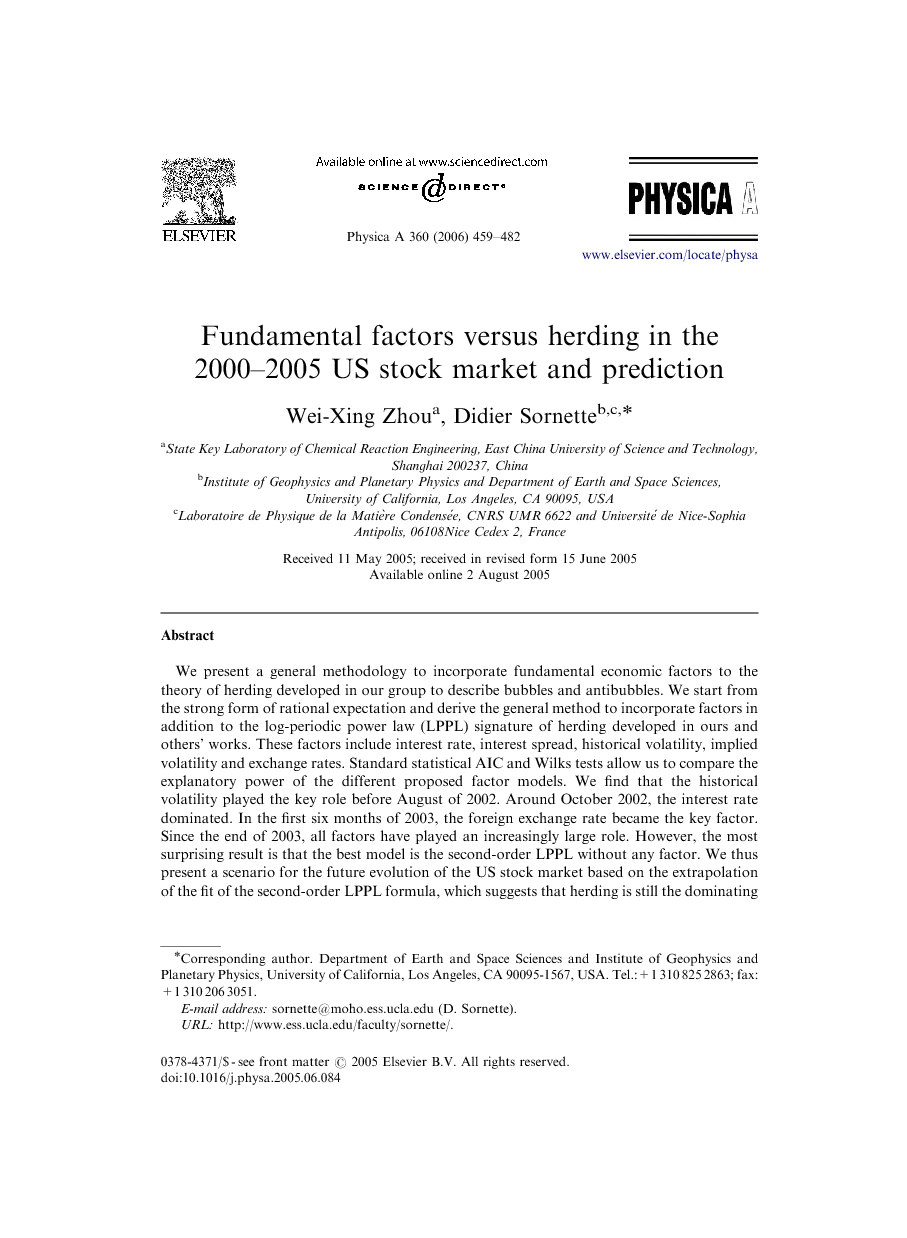 We present a general methodology to incorporate fundamental economic factors to the theory of herding developed in our group to describe bubbles and antibubbles. We start from the strong form of rational expectation and derive the general method to incorporate factors in addition to the log-periodic power law (LPPL) signature of herding developed in ours and others’ works. These factors include interest rate, interest spread, historical volatility, implied volatility and exchange rates. Standard statistical AIC and Wilks tests allow us to compare the explanatory power of the different proposed factor models. We find that the historical volatility played the key role before August of 2002. Around October 2002, the interest rate dominated. In the first six months of 2003, the foreign exchange rate became the key factor. Since the end of 2003, all factors have played an increasingly large role. However, the most surprising result is that the best model is the second-order LPPL without any factor. We thus present a scenario for the future evolution of the US stock market based on the extrapolation of the fit of the second-order LPPL formula, which suggests that herding is still the dominating force and that the unraveling of the US stock market antibubble since 2000 is still qualitatively similar to (but quantitatively different from) the Japanese Nikkei case after 1990.

As an extension of [1], since October 2002, we have posted an analysis of the US (and later other) markets after the collapse of the “information technology bubble,” forecasting a continuation of the downward correction, decorated with ups and downs organized according to a pattern we call “log-periodicity.” Monthly updates1 are available from October 31, 2002 till November 17, 2004. Our projections have been based on the generalization to “bearish” markets (we call them “antibubbles” when they follow market bubble peaks) of the concept of positive feedback based on imitation and herding that our team has demonstrated mostly for bubbles preceding financial crashes (see [2] for a review and references therein). In December 2004, we decided to discontinue the update, concluding that, after more than two years, our projections for the US market have not been verified. In contrast, our projections for the US market translated in foreign currencies (in particular in euro) have been rather accurate. Thus, a foreigner (European, say) investing in the US market and counting her wealth in euros would have found our forecasts to be accurate, while her US counterpart counting in US dollar would not. Similarly, our projections for non-US developed markets have also been good. This might suggest a dollar effect. In December 2004, we attributed our failure to forecast the rebound of the market in 2003 to the fact that we had neglected all factors except the imitation and herding behavior of investors. In particular, our approach had neglected the fundamental input of the economy as well as the external manipulations by the Fed and other institutions, the impact of foreign policy and foreign investors, the dollar effect (all these being possibly inter-related). Our projections had taken the extreme view that all these actions are endogenously determined and driven by the collective action of the investors. We thought this is too simplistic because, in general, one can understand the evolution of a system as the result of an entangled combination of endogenous organization but also as a response to external news and exogenous shocks (see [3] for a recent quantitative discussion on the issue of endogeneity versus exogeneity). In December 2004, we concluded that our live experiment from October 2002 until November 2004 had clearly demonstrated the limits of this approximation. We announced at the web site that we had found a methodology to incorporate the Feds action and the dollar effect in an extended version of our theory, to combine our herding theory with all these other factors. The first purpose of the present paper is to present this methodology. We start from the strong form of rational expectation and derive the general formalism to incorporate factors in addition to the log-periodic power law (LPPL) signature of herding. Then, our first tests show that rational expectation should be partially relaxed and we present several models combining LPPL with different factors (interest rate, interest spread, historical volatility, implied volatility, exchange rates). One particularly interesting theoretical result is that this formalism allows us to justify that the exchange rate factor amounts, for a certain value of parameters, to express the value of US market in the corresponding foreign currency (the euro if we use the $/euro exchange rate). This corresponds to taking the view point of foreigners invested in the US market, who measure their wealth in euros. As mentioned above, our projections have been found reasonably accurate from this foreign view point, as empirically discovered in our monthly updates. We also present several standard statistical AIC and Wilks tests to compare the different proposed factor models. The most surprising result is in fine that we have to prefer an extension of the LPPL formula, the so-called second-order LPPL first introduced in Ref. [4], to all other possible models including economic factors. We have to emphasize that we have previously tested and found that the first-order LPPL model proposed in Ref. [1] for the US antibubble following the burst of the Internet bubble could be rejected since Mid-2004 [5]. Thus, the above phrase “our projections for the US market have not been verified” refers solely to the predictions obtained by using the first order LPPL model presented in Ref. [1]. In contrast, our previous work [5] and the present paper both confirm the existence of a crossover from the first-order LPPL to the second-order LPPL regime. Our previous tests and projections at Sornette's website did not reject the second-order LPPL model. There is thus no contradiction between the report of a failure of the first-order LPPL model and our resuming the projections using the second-order LPPL model. Therefore, we offer a scenario for the future evolution of the US stock market based on the extrapolation of the fit of the second-order LPPL formula.

We have obtained the following results: •• We have presented a general formulation of the rational expectation model of bubbles a la Blanchard and Watson, which includes as many economic factors as one wishes. •• We have considered the following economic factors: the short-term interest rate, the VIX index of implied volatility (a measure of market risks priced by financial derivatives), the exchange rate between the US dollar and the euro, the interest rate spread (between long-term and short-term interest rates) and the historical volatility. •• The speculative aspect of financial markets has been modeled with a LPPL (log-periodic power law), which capture the mechanism of positive feedbacks with intermittent reversals. •• Notwithstanding the relatively large number of parameters of the fits (from 7 to 11 depending upon the number of factors), our fits with the factor models are effectively four-dimensional since all but 4 nonlinear parameters can be slaved to the others, as they appear as linear parameters. The remaining nonlinear parameters are the critical time tctc, the exponent m, the angular log-frequency ωω and the phase φφ. It is through the slaving leading to parameter reduction that we obtain robust fits. •• One major result is that, given that we accept the validity of the LPPL model for speculation and herding, the bad quality of the fits to the financial stock market prices has forced us to relax the rigid rational expectation condition, which imposes a strict amplitude for the short-term interest rate. We have thus allowed the amplitude of the short-term interest rate to freely adjust (adding one parameter to the theory). The economic interpretation is that financial markets do not rationally discount future expected gains. •• Since 2003, we find that all considered factors have a statistically significant information to explain the price time series (as measured with the AIC and the Wilks’ statistics). •• We have also considered the so-called “second-order” Landau LPPL model without economic factors. It has two additional nonlinear parameters compared with the simple LPPL model. One key result is that this second-order LPPL model is now found to fit the US stock market price time series very well, confirming our previous analysis two years ago suggesting the burgeoning of the transition from the simple LPPL to the second-order regime (as observed for the Japanese anti-bubble in the 1990s). This transition, expected theoretically and from the parallel with the Japanese market a decade ago, reinforces the possibility that this model provides a reasonable representation. In conclusion, the exercise of attempting to forecast the future is based on the belief that (i) the model used captures the essential mechanisms and (ii) can be reasonably stabilized for extrapolations. Only the future will tell if we have been right in being bold enough to assume that such simple representations could capture the complexity of the US stock markets and economy. This daring attempt is proposed with the belief of an inherent simplification at coarse-grained levels of description of reality, which can be captured by effective representations.