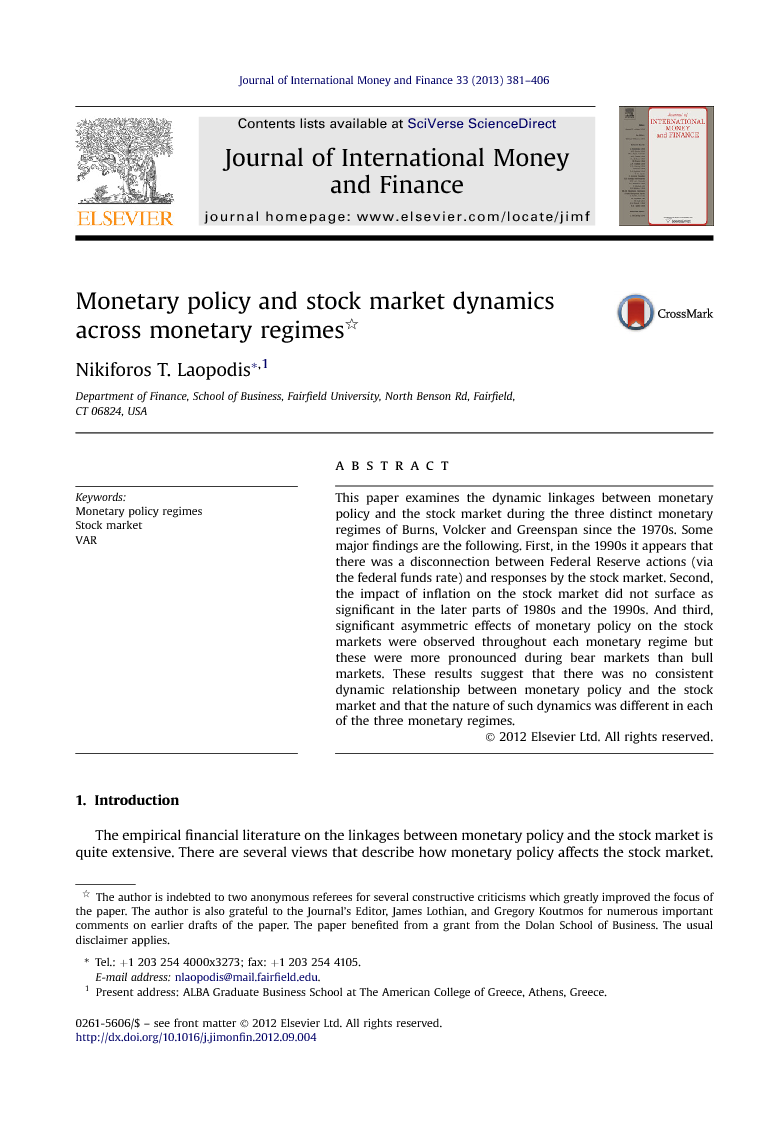 This paper empirically examined the dynamic interdependencies between monetary policy, proxied by the Fed's federal funds rate, and stock prices, proxied by the S&P500 index, for the 1970–2005 period. A vector autoregressive (VAR) specification was applied to the three monetary policy regimes of Burns (1970:01–1979:08), Volcker (1979:08–1987:08) and Greenspan (1987:08–2005:12). We employed two strategies for assessing the impact of monetary policy on the stock market. The first strategy modeled monetary policy through federal funds rate innovations emanating from a structural VAR (with several macro variables), which is our benchmark model and, the second one used the endogenously-generated break dates (based on the Bai and Perron, 2003, methodology) for distinguishing the monetary regimes for the entire 1970–2005 period. In general, our results indicated varying degrees of linkages between the two variables during each monetary regime. First, in the 1990s there seemed to have been a detachment between actions taken by the Fed and responses by the stock market and vice versa. Second, we found that monetary policy had a different impact during bull and bear markets (particularly pronounced during bear markets) and among different bull markets (such as the long boom of the mid 1990s). And third, the impact of inflation on the stock market and the funds rate, with their interaction with the federal funds rate, did not seem to be significant in the 1990s. Overall, the results seem to suggest that there was no consistent, dynamic relationship between monetary policy and the stock market and that the nature of such dynamics was different in each of the three different Fed operating regimes. The above evidence, in general, may imply the use of the credit channel of the monetary transmission mechanism, which places emphasis on how monetary policy affects the economy through asset prices (apart from interest rates). Perhaps, in view of the events of the last decade and most recent months (such as financial crises, recessions, and so on) evidence of the actual use of this channel as a monetary policy transmission mechanism may indeed exist. Besides, the Fed may have been obligated to respond to market woes or implicitly obtain market approval before stepping in to bail out the system. In conclusion, this (stock) market-favoring policy shift (originated in the Volcker era with his high-interest rate policy) may have been the central focus of the Greenspan era, and this is clear from Greenspan's differential treatment of the financial markets and his responses to financial crises.