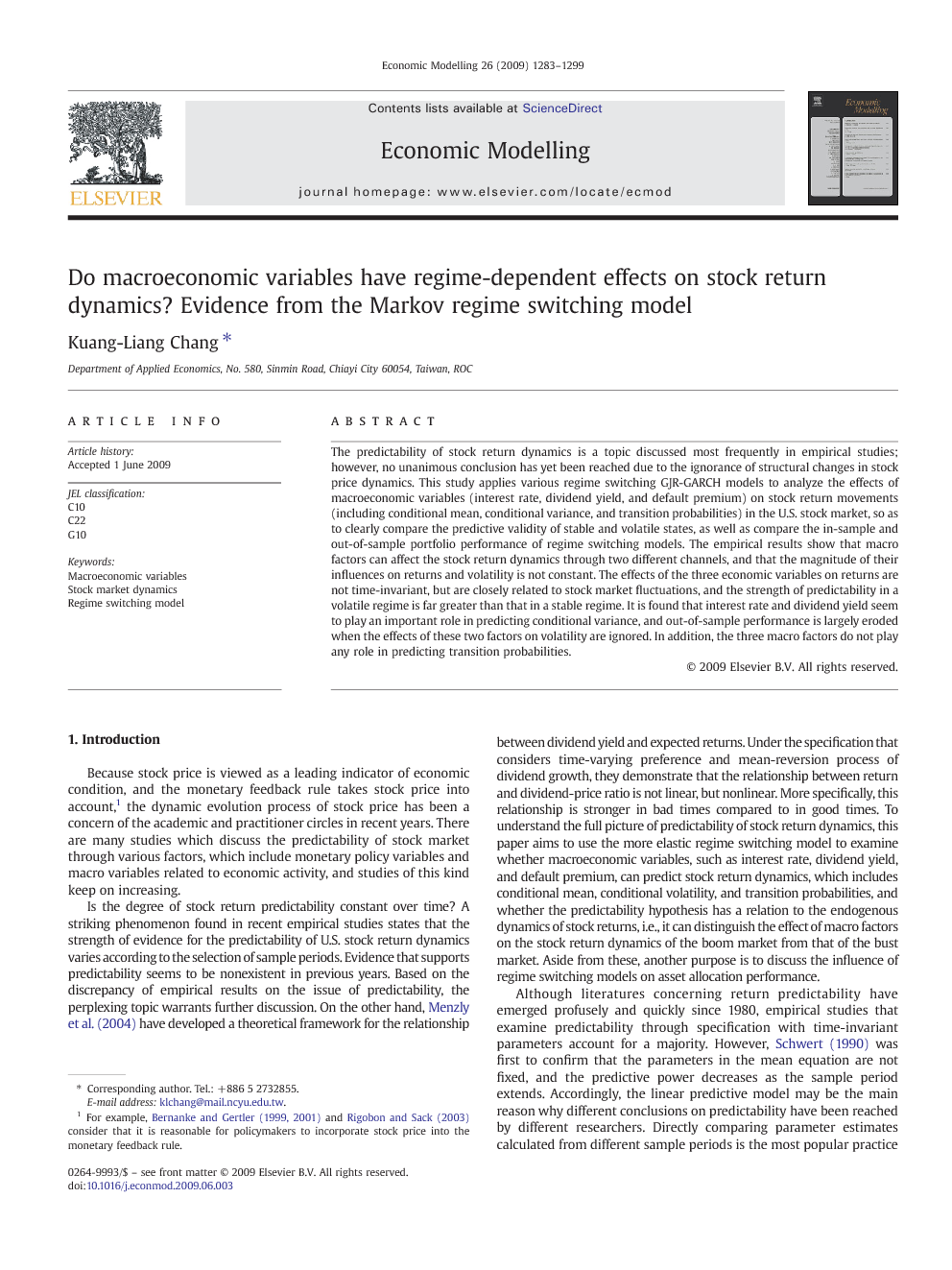 The predictability of stock return dynamics is a topic discussed most frequently in empirical studies; however, no unanimous conclusion has yet been reached due to the ignorance of structural changes in stock price dynamics. This study applies various regime switching GJR-GARCH models to analyze the effects of macroeconomic variables (interest rate, dividend yield, and default premium) on stock return movements (including conditional mean, conditional variance, and transition probabilities) in the U.S. stock market, so as to clearly compare the predictive validity of stable and volatile states, as well as compare the in-sample and out-of-sample portfolio performance of regime switching models. The empirical results show that macro factors can affect the stock return dynamics through two different channels, and that the magnitude of their influences on returns and volatility is not constant. The effects of the three economic variables on returns are not time-invariant, but are closely related to stock market fluctuations, and the strength of predictability in a volatile regime is far greater than that in a stable regime. It is found that interest rate and dividend yield seem to play an important role in predicting conditional variance, and out-of-sample performance is largely eroded when the effects of these two factors on volatility are ignored. In addition, the three macro factors do not play any role in predicting transition probabilities.

The specification that macro variables have time-invariant predictive capability for stock returns has been widely used. Unfortunately, evidence of predictability in stock return dynamics varies from study to study, and no agreement so far has been reached. In order to discuss whether the predictability exists and whether the magnitude of predictability changes with time, the Markov regime switching GARCH models are adopted to conduct empirical analyses in this paper, and evidence that explains the inconsistency is provided. Aside from studying stock return predictability, the effects of these same variables on volatility and transition probability are also discussed. Empirical results show that S&P 500 stock returns and volatility depend on macro factors, and the degree of influence changes along with stock market conditions. For instance, dividend yield cannot be used to predict stock returns in single-regime models, but it has significant predictive power in the Markov switching models, especially during volatile periods. In addition, the contribution of default premium and interest rate to stock returns in the volatile regime is significantly greater compared to that in the stable regime. These important characteristics cannot be discovered through time-invariant predictive models. Also, dividend yield and interest rate also show nonlinear influences on conditional variance. Dividend yield has a positive influence on volatility in the volatile regime, while the interest rate is capable of predicting volatility in the stable regime. Even after considering the predictive power of macro factors on conditional mean and variance, evidence of transition probability predictability is not found. It is confirmed that the RS-GARCH-FTP-MV model has better out-of-sample predictive ability than the GARCH-N and GARCH-T models. The time-varying transition probability model will misestimate stock returns dynamics due to over-fitness, which in turn causes out-of-sample prediction performance to become poor. In the RS-GARCH-TVTP-MV model, its good in-sample performance and the bad out-of-sample performance could be attributed to the problem of over-parameterization. In summary, ignoring the importance of nonlinear predictability will lead to the wrong conclusion that stock returns are unpredictable. The well-known present value (PV) model of stock prices indicates that current stock prices depend on the discount value of future cash flow, conditional on the information set available in the current period.30 This means that any change in related information could cause changes in stock price dynamics such as stock returns, volatility, etc. The empirical results of the RS-GARCH-FTP-MV model support the idea that macro variables have significant influence on stock return and volatility, and therefore conform to the implication of the present value model.