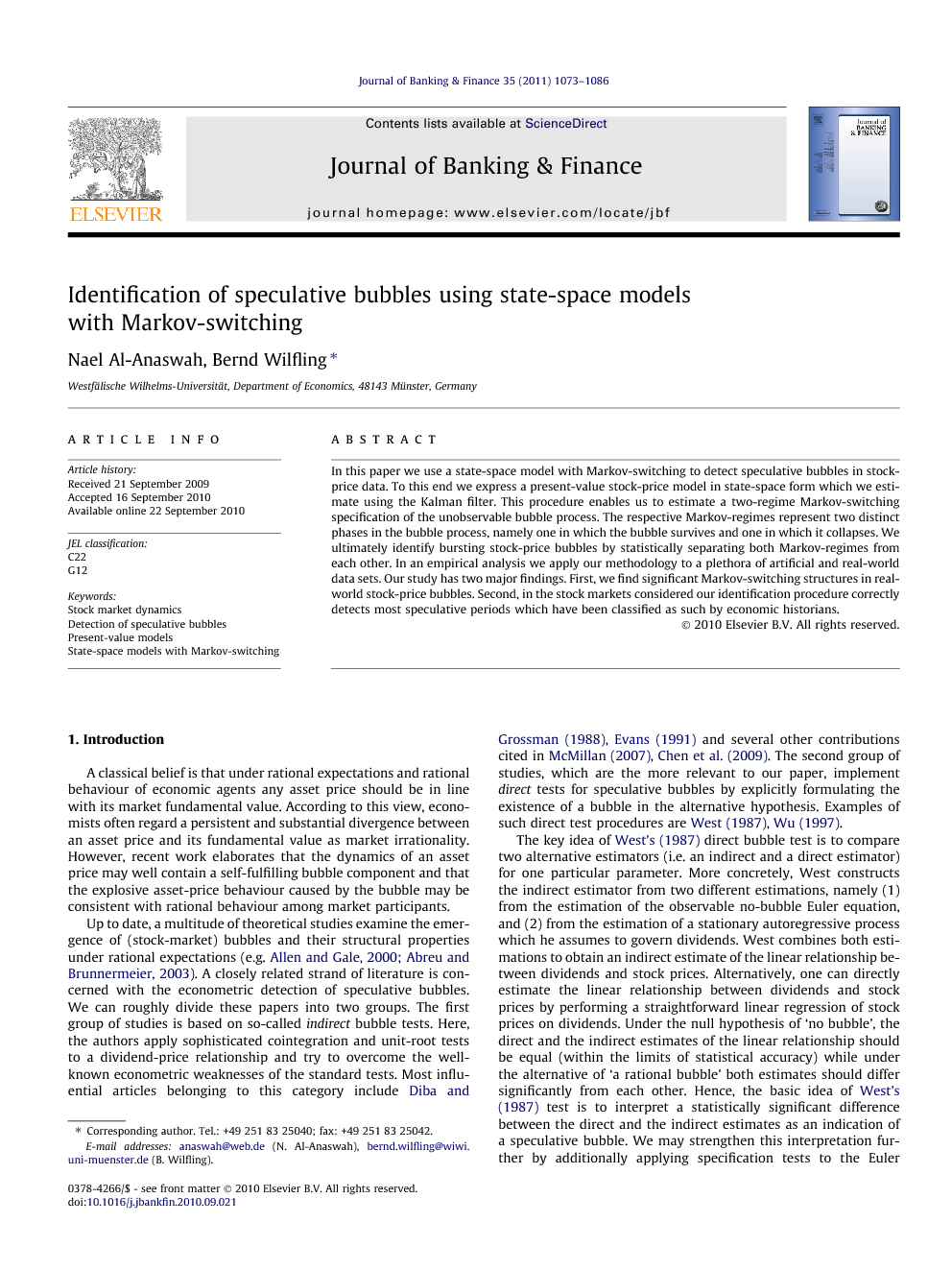 In this paper we use a state-space model with Markov-switching to detect speculative bubbles in stock-price data. To this end we express a present-value stock-price model in state-space form which we estimate using the Kalman filter. This procedure enables us to estimate a two-regime Markov-switching specification of the unobservable bubble process. The respective Markov-regimes represent two distinct phases in the bubble process, namely one in which the bubble survives and one in which it collapses. We ultimately identify bursting stock-price bubbles by statistically separating both Markov-regimes from each other. In an empirical analysis we apply our methodology to a plethora of artificial and real-world data sets. Our study has two major findings. First, we find significant Markov-switching structures in real-world stock-price bubbles. Second, in the stock markets considered our identification procedure correctly detects most speculative periods which have been classified as such by economic historians.

In this paper we propose a new methodology for detecting speculative bubbles in stock-price data. The methodology constitutes a state-space approach that we enrich by Markov-switching elements. Hitherto, this procedure has mainly been used in the field of business-cycle research and our innovation is to adapt it to Campbell and Shiller’s (1988) present-value stock-price model. In the state-space representation of this model, the unobservable state-vector constitutes the bubble component. By allowing the bubble process to switch between two regimes according to a first-order Markov chain, we are able to statistically discriminate surviving from collapsing phases in the bubble process. In order to check the validity of our econometric procedure, we apply it to a number artificial bubble processes which we generate according to the algorithm suggested by Evans (1991). Furthermore, we analyze real-world data using the well-known stock-price and dividend data set by Robert Shiller as well as stock-price data for various other countries which are known to have experienced severe bubble periods. The results of our investigation are twofold. First, we find statistically significant regime-switching structures in the stock-price bubble processes of our real-world data sets. Consequently, any theoretical bubble model and, in particular, any econometric (bubble) specification should take regime-switching structures into account. Second, our Markov-switching approach is able to detect the majority of bubbles in our artificial Evans-processes as well as in our real-world data sets. For the countries considered, our (smoothed) regime-probability technique identifies most speculative periods as classified by Kindleberger and Aliber (2005). We analyze a set of heterogeneous countries by exploring stock-price data for three emerging economies (Brazil, Indonesia, Malaysia) and two industrialized countries (Japan and the USA). Interestingly, our methodology identifies the relevant bubbles in both groups of countries although the respective bubble periods as well as the subsequent crash phases may feature qualitative differences. Analyzing policy-side reactions to asset-price booms, we find that for Indonesia and Malaysia the IMF acted as a lender of last resort in the Asian Crisis of 1997 (see Kindleberger and Aliber, 2005, pp. 180–181) and insisted that (1) both countries’ governments balanced their budgets and that (2) the respective central banks increased interest rates. In contrast to this, the authorities in the US and in Japan responded to the recent bubble periods by pursuing expansive fiscal and monetary policies which, compared to the emerging countries, helped both economies to better recover from financial distress. However, our present econometric framework is not designed to capture such qualitative differences. A line for future research in this direction may lie in the development of alternative econometric specifications of the bubble term Bt which are more complex than our two-regime autoregressive Markov-switching process. However, the econometric procedure applied in this paper illustrates that Markov-switching specifications may make a substantial contribution to the dynamics of stock-price bubbles. We therefore propose integrating this empirical finding into conventional methods designed to discover real-time stock-price bubbles in order to considerably improve the chances of detecting future bubbles at an early stage.