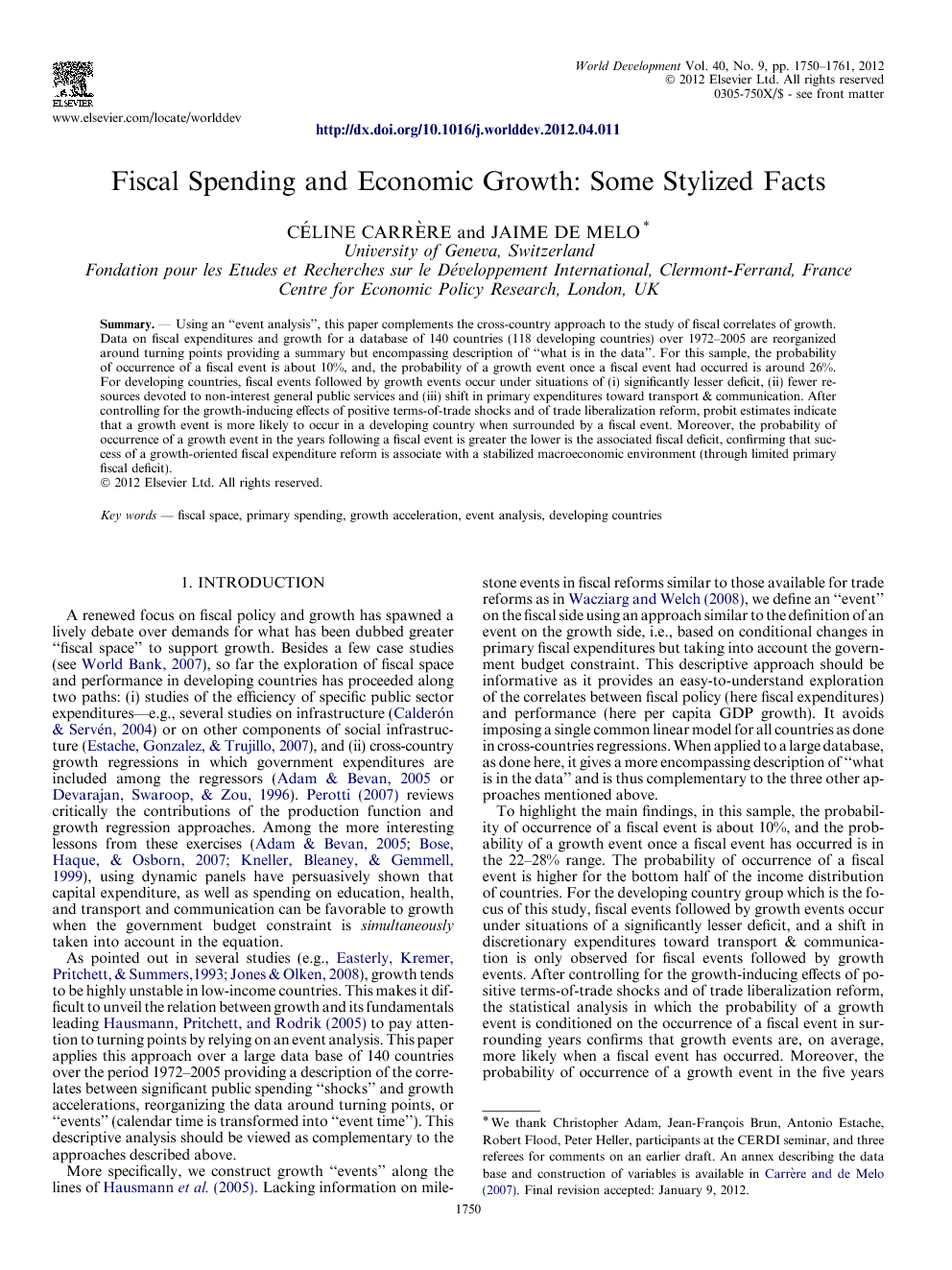 Using an “event analysis”, this paper complements the cross-country approach to the study of fiscal correlates of growth. Data on fiscal expenditures and growth for a database of 140 countries (118 developing countries) over 1972–2005 are reorganized around turning points providing a summary but encompassing description of “what is in the data”. For this sample, the probability of occurrence of a fiscal event is about 10%, and, the probability of a growth event once a fiscal event had occurred is around 26%. For developing countries, fiscal events followed by growth events occur under situations of (i) significantly lesser deficit, (ii) fewer resources devoted to non-interest general public services and (iii) shift in primary expenditures toward transport & communication. After controlling for the growth-inducing effects of positive terms-of-trade shocks and of trade liberalization reform, probit estimates indicate that a growth event is more likely to occur in a developing country when surrounded by a fiscal event. Moreover, the probability of occurrence of a growth event in the years following a fiscal event is greater the lower is the associated fiscal deficit, confirming that success of a growth-oriented fiscal expenditure reform is associate with a stabilized macroeconomic environment (through limited primary fiscal deficit).

A renewed focus on fiscal policy and growth has spawned a lively debate over demands for what has been dubbed greater “fiscal space” to support growth. Besides a few case studies (see World Bank, 2007), so far the exploration of fiscal space and performance in developing countries has proceeded along two paths: (i) studies of the efficiency of specific public sector expenditures—e.g., several studies on infrastructure (Calderón & Servén, 2004) or on other components of social infrastructure (Estache, Gonzalez, & Trujillo, 2007), and (ii) cross-country growth regressions in which government expenditures are included among the regressors (Adam & Bevan, 2005 or Devarajan, Swaroop, & Zou, 1996). Perotti (2007) reviews critically the contributions of the production function and growth regression approaches. Among the more interesting lessons from these exercises (Adam & Bevan, 2005; Bose et al., 2007 and Kneller et al., 1999), using dynamic panels have persuasively shown that capital expenditure, as well as spending on education, health, and transport and communication can be favorable to growth when the government budget constraint is simultaneously taken into account in the equation. As pointed out in several studies (e.g., Easterly et al., 1993 and Jones and Olken, 2008), growth tends to be highly unstable in low-income countries. This makes it difficult to unveil the relation between growth and its fundamentals leading Hausmann, Pritchett, and Rodrik (2005) to pay attention to turning points by relying on an event analysis. This paper applies this approach over a large data base of 140 countries over the period 1972–2005 providing a description of the correlates between significant public spending “shocks” and growth accelerations, reorganizing the data around turning points, or “events” (calendar time is transformed into “event time”). This descriptive analysis should be viewed as complementary to the approaches described above. More specifically, we construct growth “events” along the lines of Hausmann et al. (2005). Lacking information on milestone events in fiscal reforms similar to those available for trade reforms as in Wacziarg and Welch (2008), we define an “event” on the fiscal side using an approach similar to the definition of an event on the growth side, i.e., based on conditional changes in primary fiscal expenditures but taking into account the government budget constraint. This descriptive approach should be informative as it provides an easy-to-understand exploration of the correlates between fiscal policy (here fiscal expenditures) and performance (here per capita GDP growth). It avoids imposing a single common linear model for all countries as done in cross-countries regressions. When applied to a large database, as done here, it gives a more encompassing description of “what is in the data” and is thus complementary to the three other approaches mentioned above. To highlight the main findings, in this sample, the probability of occurrence of a fiscal event is about 10%, and the probability of a growth event once a fiscal event has occurred is in the 22–28% range. The probability of occurrence of a fiscal event is higher for the bottom half of the income distribution of countries. For the developing country group which is the focus of this study, fiscal events followed by growth events occur under situations of a significantly lesser deficit, and a shift in discretionary expenditures toward transport & communication is only observed for fiscal events followed by growth events. After controlling for the growth-inducing effects of positive terms-of-trade shocks and of trade liberalization reform, the statistical analysis in which the probability of a growth event is conditioned on the occurrence of a fiscal event in surrounding years confirms that growth events are, on average, more likely when a fiscal event has occurred. Moreover, the probability of occurrence of a growth event in the five years following a fiscal event is greater the lower is the associated fiscal deficit, confirming that success of a growth-oriented fiscal- expenditure package is associated with a stabilized macroeconomic environment (through limited fiscal deficit). The paper unfolds as follows. Section 2 presents the identification conditions of both growth and fiscal events (with details and sensitivity analysis left to the Carrère & de Melo, 2007, Annex A.3). Section 3 studies the characteristics of growth and fiscal events, and the relation between the two. The descriptive analysis computes fiscal event (unconditional) probabilities and probabilities that fiscal events are followed (or not) by growth events. Section 4 investigates the characteristics of fiscal events, in particular the ones followed by a growth event, in terms of geography, underlying changes in expenditure composition, and in the level of associated primary deficit. Then the statistical analysis turns on the growth side, the objective being to see if, based on probit estimates, growth events are more likely to occur in a developing country when surrounded by a fiscal event. Section 5 concludes.