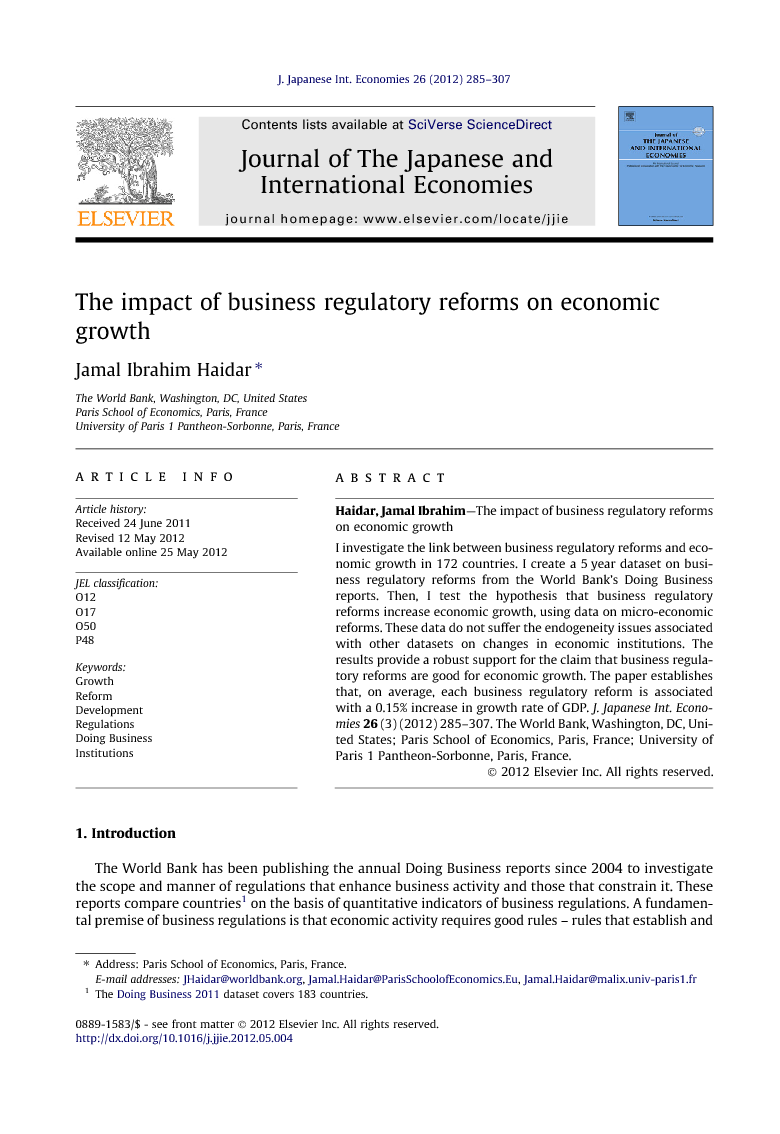 The World Bank has been publishing the annual Doing Business reports since 2004 to investigate the scope and manner of regulations that enhance business activity and those that constrain it. These reports compare countries1 on the basis of quantitative indicators of business regulations. A fundamental premise of business regulations is that economic activity requires good rules – rules that establish and clarify property rights and reduce the cost of resolving disputes; rules that increase the predictability of economic interactions and provide contractual partners with certainty and protection against abuse (Acemoglu et al., 2001 and Djankov et al., 2002). The objective is regulations designed to be efficient, accessible to all and simple in their implementation. Djankov et al. (2006) and Haidar (2009) show in cross country regressions that burdensome business regulatory procedures are negatively correlated with GDP growth. This paper is different in two different ways. First, while Djankov et al. (2006) and Haidar (2009) focus on 1 year, much less countries, a lower number of indicators, and a narrower geographic scope, this paper looks at a 5-year period, a larger regulatory scope, and a broader set of countries. Second, the main independent variable in Djankov et al. (2006) and Haidar (2009) is different. The authors look at the regulatory status at 1 year but this paper considers a more interesting and important variable, regulatory reform (not status) at a given year and over time. They consider that growth is a function of the existing regulatory framework. I argue that the level of income can be a function of existing regulatory framework but a change in income level is more of a function of how regulatory framework changes and improves. This paper uses the World Bank Doing Business indicators as proxies of business regulations, identifies business regulatory reforms by Doing Business reforms, and goes further towards answering the question about whether regulatory reforms enhance economic growth by studying a major determinant of economic growth: regulatory reforms governing business activity. A vibrant private sector – with firms making investments, creating jobs, and improving productivity – promotes growth and expands opportunities for poor people (OECD and World Bank, 2006). To strengthen private sector, governments around the world have implemented wide-ranging reforms, including macro-stabilization programs, price liberalization, privatization, and trade-barrier reductions. In many countries, however, entrepreneurial activity remains limited, poverty stays high, and growth is not significantly far from stagnant. And other countries have spurned orthodox macro reforms and done well. Although macro policies are unquestionably important, there is a growing consensus that the quality of business regulation and the institutions that enforce it are a major determinant of prosperity. Hong Kong (China)’s economic success, Botswana’s stellar growth performance, and Hungary’s smooth transition experience have all been stimulated by a good business regulatory environment.2 However, little research has measured specific aspects of business regulation and analyzed their impact on economic outcomes such as growth, productivity, investment, informality, corruption, unemployment, and poverty. The lack of systematic knowledge prevents policymakers from assessing how good legal and regulatory systems are and determining what to reform. The World Bank Doing Business regulatory indicators have four key goals. First, they aim to motivate reforms through country benchmarking. Second, they try to inform the design of reforms by highlighting specifically what needs to be changed. Third, the dataset enriches international initiatives on development effectiveness. Fourth, the dataset tries to inform theory by producing new indicators that quantify various aspects of regulation, facilitating tests of existing theories, and contributing to the empirical foundation for new theoretical work on the relation between regulation and development. Governments around the world reported 1140 business regulatory reforms over the 5 years up to 2010.3 Against the backdrop of the global financial and economic crisis, policy makers around the world continue to reform business regulations at the level of the firm, in some areas at an even faster pace than before. Most reforms were nested in broader programs of investment climate reform aimed at enhancing economic competitiveness, as in Colombia, Kenya, and Liberia. In structuring their reform programs for the business environment, governments use multiple data sources and indicators. And, reformers respond to many stakeholders and interest groups, all of whom bring important issues and concerns to the debate. World Bank Group dialogue with governments on the investment climate is designed to encourage critical use of the data, sharpen judgment, avoid a narrow focus on improving rankings, and encourage broad-based reforms that enhance the investment climate. These continued efforts prompt questions: What is the impact of business regulatory reforms on economic growth? This paper aims to present new findings toward answering this question. The paper proceeds as follows. Section 2 reviews literature. Section 3 describes data. Section 4 presents main empirical results. Section 5 provides robustness checks, and Section 6 concludes.