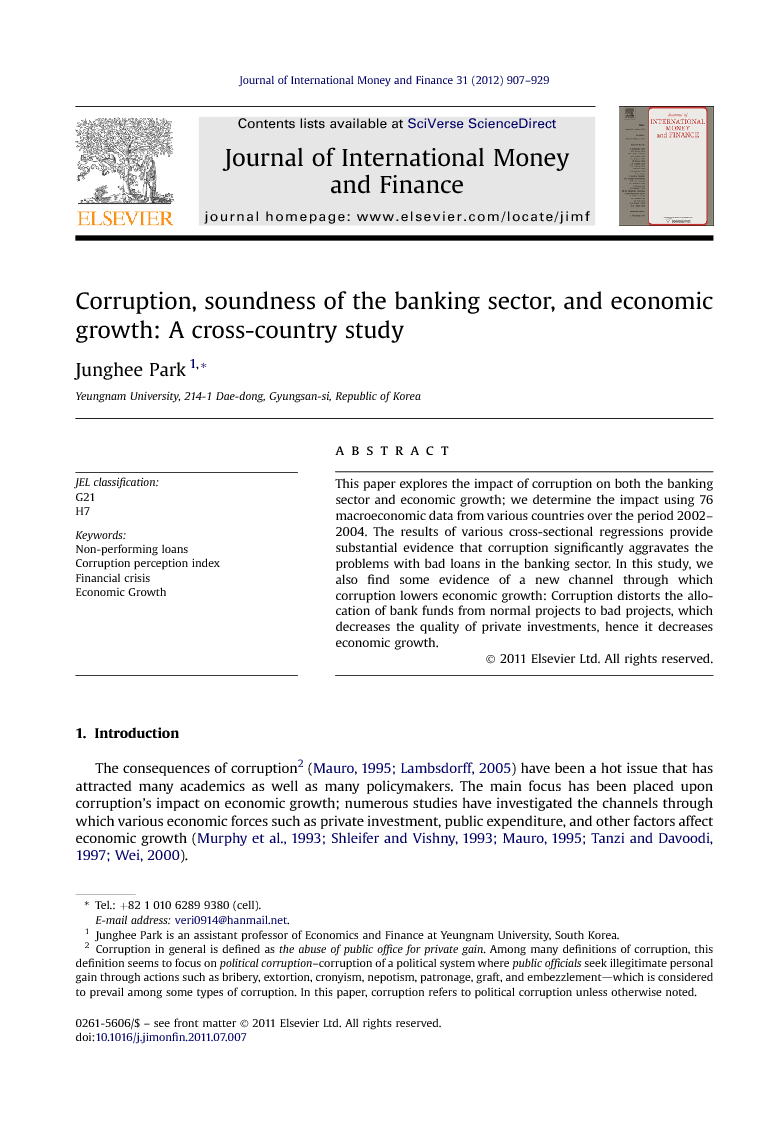 This paper explores the impact of corruption on both the banking sector and economic growth; we determine the impact using 76 macroeconomic data from various countries over the period 2002–2004. The results of various cross-sectional regressions provide substantial evidence that corruption significantly aggravates the problems with bad loans in the banking sector. In this study, we also find some evidence of a new channel through which corruption lowers economic growth: Corruption distorts the allocation of bank funds from normal projects to bad projects, which decreases the quality of private investments, hence it decreases economic growth.

The consequences of corruption2 (Mauro, 1995 and Lambsdorff, 2005) have been a hot issue that has attracted many academics as well as many policymakers. The main focus has been placed upon corruption’s impact on economic growth; numerous studies have investigated the channels through which various economic forces such as private investment, public expenditure, and other factors affect economic growth (Murphy et al., 1993, Shleifer and Vishny, 1993, Mauro, 1995, Tanzi and Davoodi, 1997 and Wei, 2000). Meanwhile, extensive evidence suggests that corruption was a contributing factor to the worldwide financial crises via its adverse impact on the banks’ balance sheets.3 In particular, through the incidents during the 1997–1998 East-Asian financial crises, it was revealed that the prevalent corruption contributed to the financial crises. The case involving the Hanbo corporation in South Korea is a typical example that the strong ties between firms and politicians have led to the serious deterioration of the banks’ asset quality and ultimately to the financial crisis.4 However, the description of the relationship between corruption and the banks’ performance has mainly relied on anecdotal evidence, and very little academic effort has been made so far. The goal of this paper is to provide rigorous empirical evidence of the impact of corruption on the soundness of the banking sector. We also attempt to verify whether an accumulation of bad loans adversely affects a country’s economic growth because the banking sector, in general, plays a pivotal role in a country’s economy. The corruption affecting a bank’s performance could arise for several reasons: firms may bribe politicians (e.g., to secure loans by bypassing the loan review processes), banks may bribe politicians5 (e.g., to gain regulatory forbearance), and so on (see Munshi (1999) for examples of corruption that affect bank performance.) Presumably, one possible result will be the misallocation of loanable funds from normal projects to bad projects,6 which typically ends up with an increase of non-performing loans.7 As a result, increasing the amount of bad loans may lead to the reduction in the productivity of private investment8 finally, it may lead to lower economic growth. Although it is highly likely that a country with highly corrupt public sector usually has a highly corrupt banking sector, corruption does not necessarily lead to bad loans in the banking sector. For example, a borrower who has a good project may bribe a loan officer to save time by bypassing the usual loan review process. In this case, the probability of success may increase due to the timely implementation of the project (see Mauro (1995) for a similar “speed money” argument). Even when a borrower with a bad project receives funds via corruption, nobody knows if the funded project will fail or succeed in the end, though the probability of success will be relatively low. Moreover, corruption measured by the Corruption Perceptions Index (CPI) has little to do with the corruption of the banking sector, which is explained further in Section 2.2. Even if CPI is related to the corruption of the banking sector, bad loans may not be a relevant issue when CPI is created. Their concern in the survey is not related to the bad loans, but it is related to the behavioral aspects of corruption. For example, they may ask questions like “Have you experienced any bribery during bank transactions?” but they may not ask questions like “Have you seen any bad loans during bank transactions?” While they may observe bad loans during the survey, they cannot simply ascribe the bad loans to corruption because there are so many determinants of bad loans. 9 Therefore, corruption itself is not the same term as bad loans, and a highly corrupt country does not necessarily have a greater number of bad loans than a country with lower corruption. Accordingly, the relationship between corruption and bad loans needs to be verified empirically. If our arguments are supported by empirical results, this paper may contribute to existing literature in two important ways. First, they provide a possible explanation of why corruption is so frequently cited as one of the main forces causing a financial crisis: Corruption degrades bank soundness, which leads to a weak banking system, and hence makes a country more vulnerable to a financial crisis. Second, it suggests a new potential channel through which corruption lowers economic growth. Mauro (1995) states that corruption decreases the quantity of private investment acting as a tax on investment, whereas we argue that corruption degrades the quality of private investment by distorting the banks’ intermediation of loanable funds. 10 The remainder of the paper is organized in the following manner. In Section 2, we explain the CPI and other explanatory variables as well as a bank loan quality variable. In Section 3, we set up econometric models to verify the relationship between corruption and bank loans. Section 4 tests the robustness of earlier analyses using various alterative specifications. Section 5 analyzes the effect of corruption on economic growth, and the last section concludes the paper with some policy implications.

We obtained some meaningful results through the empirical analyses. First, we found substantial evidence that corruption significantly deteriorates the quality of bank loans. The relationship between CI and NPLR was positive and very significant. This result was robust to an alternative corruption index, to an alternative dependent variable, and to an inclusion of other explanatory variables. After controlling for the potential measurement bias of CI, the results did not change significantly. Considering that the increase of the risky loan portfolios makes the overall banking system very weak, and thus it renders the country more vulnerable to the financial crisis, corruption could be an important cause of financial crises. Second, we found some evidence that increasing bad loans decreases the growth rate of a country’s economy. We think this could be a new channel through which corruption lowers economic growth: Corruption distorts the allocation of bank funds from normal projects to bad projects, which decreases the quality of private investment, hence corruption lowers economic growth. Finally, the observance that DI and CAP seem to work well only in the LCG (see Table 5) provides an important policy implication: Exerting efforts to fight against corruption should be the first step to enhance the soundness of the banking sector for countries belonging to the HCG. Otherwise, regulatory measures or an improvement of management skill would not be effective.