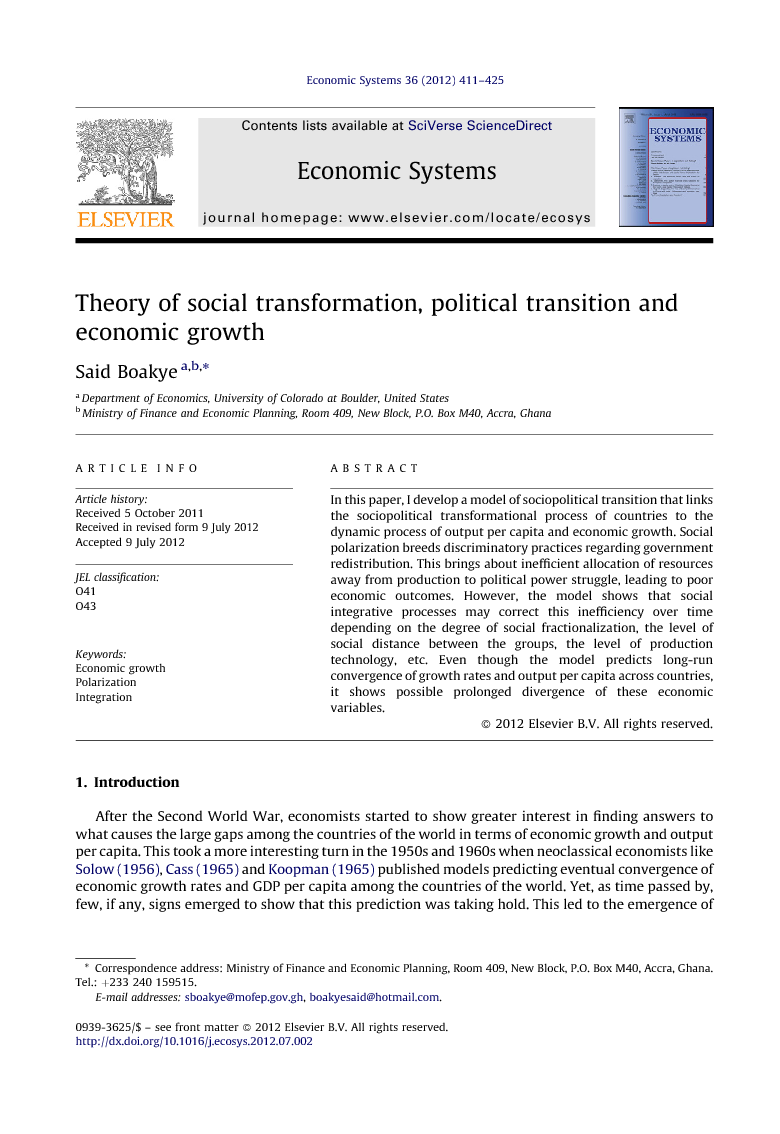 In this paper, I develop a model of sociopolitical transition that links the sociopolitical transformational process of countries to the dynamic process of output per capita and economic growth. Social polarization breeds discriminatory practices regarding government redistribution. This brings about inefficient allocation of resources away from production to political power struggle, leading to poor economic outcomes. However, the model shows that social integrative processes may correct this inefficiency over time depending on the degree of social fractionalization, the level of social distance between the groups, the level of production technology, etc. Even though the model predicts long-run convergence of growth rates and output per capita across countries, it shows possible prolonged divergence of these economic variables.

After the Second World War, economists started to show greater interest in finding answers to what causes the large gaps among the countries of the world in terms of economic growth and output per capita. This took a more interesting turn in the 1950s and 1960s when neoclassical economists like Solow (1956), Cass (1965) and Koopman (1965) published models predicting eventual convergence of economic growth rates and GDP per capita among the countries of the world. Yet, as time passed by, few, if any, signs emerged to show that this prediction was taking hold. This led to the emergence of endogenous growth models in the late 1980s and early 1990s (see, for instance, Romer, 1990 and Romer, 1996; Lucas, 1988 and Azariadis and Drazen, 1990) which predicted that the differences in growth rates and GDP per capita between the developed world and the developing world may perpetuate. What all these models have in common is that they assume away the social and political environments economies operate in. That is, these models treat countries as if they have similar social and political environments. However, since countries differ considerably in terms of the level of sociopolitical development and maturity, and since the economic outcome is influenced immensely by the sociopolitical environment, this kind of treatment makes these models incomplete, and thus renders their predictions less accurate. Therefore, by embedding the sociopolitical transformational process of countries into the choice process of economic agents, the model in this paper is able to offer a stronger explanation for the dynamic behavior of output per capita of countries, thereby providing a more accurate explanation for the gaps among countries in terms of economic growth and development. I argue in this paper that social fractionalization in terms of ethnicity, race, religion, etc., breeds discriminatory practices, thereby creating political tensions. This results in an inefficient use of economic resources to struggle for political power in order to take control of government machinery for the purpose of being in charge of the government's redistribution mechanism. Therefore, I show that ethnic/racial or religious fragmentation ultimately leads to economic inefficiency and thus to poor economic outcomes. However, I also show that social dynamics may minimize this inefficiency over time, thereby enhancing economic performance as countries undergo sociopolitical transformation. And since this process may differ from one country to another, gaps among countries will emerge in terms of output per capita and economic growth, especially at the initial stage of the sociopolitical process. The economy in this model is populated by two groups of people. The groups are defined along ethnic, racial or religious lines. I assume that the government formed by a group is not different from the group as a whole in terms of its objectives. Like Pham (2005), van Long and Shimomura (2004), Corneo and Jeanne (2001), Rauscher (1997), Fershtman et al. (1996), etc., individuals in this model derive utility from both consumption and social status.1 However, unlike these models, in which social status is determined by relative wealth, relative consumption or level of education, the social status of individual group members in this model is determined by the extent to which the group's sociocultural or religious values or philosophy are promoted. This means that a group would like to control the government and thus have political power because the group is able to more effectively advance its sociocultural or religious values or ideology when in power than when in the opposition. The power struggle between the groups may be so intense at the initial stage of the country's formation that a legal or democratic framework established to dictate a smooth power transition may not work because of the presence of incentives to deviate from established rules. That is, the intensity of a political power struggle at the initial stage may be relatively high, and thus take violent forms. This is the source of economic inefficiency at the initial stage. However, as the groups become more socially integrated, this inefficiency will diminish over time, thereby enhancing economic growth. Nevertheless, the rate of social integration may differ from one country to another, resulting in different growth rates of per-capita output across countries. Factors that have been cited in the literature to account for social integration include education (see, for instance, de Palo et al., 2006) and intermarriages (see, for instance, Furtado, 2006). In this model, I emphasize the latter. That is, as intermarriages increase, the groups become more socially integrated, and the intensity of the political power struggle and its accompanying economic inefficiency evaporates, since economic resources get reallocated towards productive use. Although empirical work (see, for instance, Easterly and Levine, 1997 and Keefer and Knack, 2002) has seriously taken into account the crucial role social fragmentation plays in limiting economic growth and thus creating divergence of growth rates across countries, theoretical work in this area tends to take an indirect approach in linking social fragmentation to economic growth and output per capita (see, for instance, Alesina and Drazen, 1991 and Alesina and Spolaore, 1997). That is, these models tend to link social fragmentation to issues like public goods provision and macroeconomic stabilization. This paper therefore contributes to this literature by developing a theoretical model that directly links social polarization to the dynamic behavior of per capita output. On the empirical front, Easterly and Levine (1997), for instance, find a very strong negative correlation between ethnic divisions and economic growth. Most interestingly, Easterly and Levine find that ethnic fragmentation is strongly and significantly correlated to many of the conditional variables in growth regressions when a measure of ethnic fractionalization serves as an independent variable to these variables in regressions. This, they argue, suggests that these factors are endogenous to ethnic fragmentation, conforming to one of the main assertions in this paper, that the main cause of political tension which brings about distortions and inefficiencies regarding the allocation of economic resources leading to economic under-performance is social fragmentation. The rest of the paper is organized as follow. Section 2 discusses related literature, Section 3 presents the model and Section 4 concludes the paper.

We have seen from this model that the social and political environments in which economies operate immeasurably affect economic outcomes. This is because, as we saw from the analyses, social polarization creates political tensions which bring about an unhealthy power struggle at least at the initial stage of the sociopolitical process, leading to inefficient allocation of economic resources towards the political power struggle, which results in poor economic performance. However, over time, as the society becomes more and more integrated through intergroup marriages, this political tension diminishes, leading to a more efficient allocation of resources towards production away from the political power struggle, thereby improving the economic outcome. Through these processes, I have shown that the growth rate of per-capita output is generally higher at the initial stage than in the limits. However, fundamental differences in terms of the level of social distance between the groups, the relative sizes of the social groups, etc., affect the rate at which each country can grow and catch up with the already developed world. And, with the exception of the extreme case where the social groups have no chance of integrating (which may lead to the country disintegrating into pieces), economic growth will happen, even though it may happen at a slower rate and the catch-up may take more time. One policy recommendation of this model is that to help a country overcome economic challenges and thus to speed up economic growth, we may not merely want to provide financial aid, but we may have to provide measures that will speed up social integration and social harmonization so as to bring about a more efficient use of domestic resources. It is clear that the model in this paper is silent about economic processes like physical capital accumulation, human capital accumulation, financial sector development, etc., while these processes may impact the economic outcome. For this reason, it may be interesting to incorporate these processes into the model. However, if the appropriate sociopolitical environments exist, I do not see why these economic processes will differ from one country to another, especially if we assume that the employment of these resources exhibits diminishing marginal productivity. We can deduce from the analysis so far that the main reason why other models that seek to explain cross-country growth differences fail to fully explain the differences in growth rates, especially among countries in the developing world, is that these models implicitly assume that all countries have similar, if not identical, social and political environments. But as we saw in the analyses, countries do differ greatly in terms of sociopolitical environments and their transformational processes. Let me point out at this point that as my definition of ‘country’ suggests, the conclusion about the long-run economic convergence of countries is conditional on the ability of the countries of the world to preserve or even strengthen the existing international political order. If the international political order breaks down and countries start to occupy and colonize others as it used to happen in the past, then the colonized countries’ political structure may break down, creating new complications socially and politically even if independence is regained.