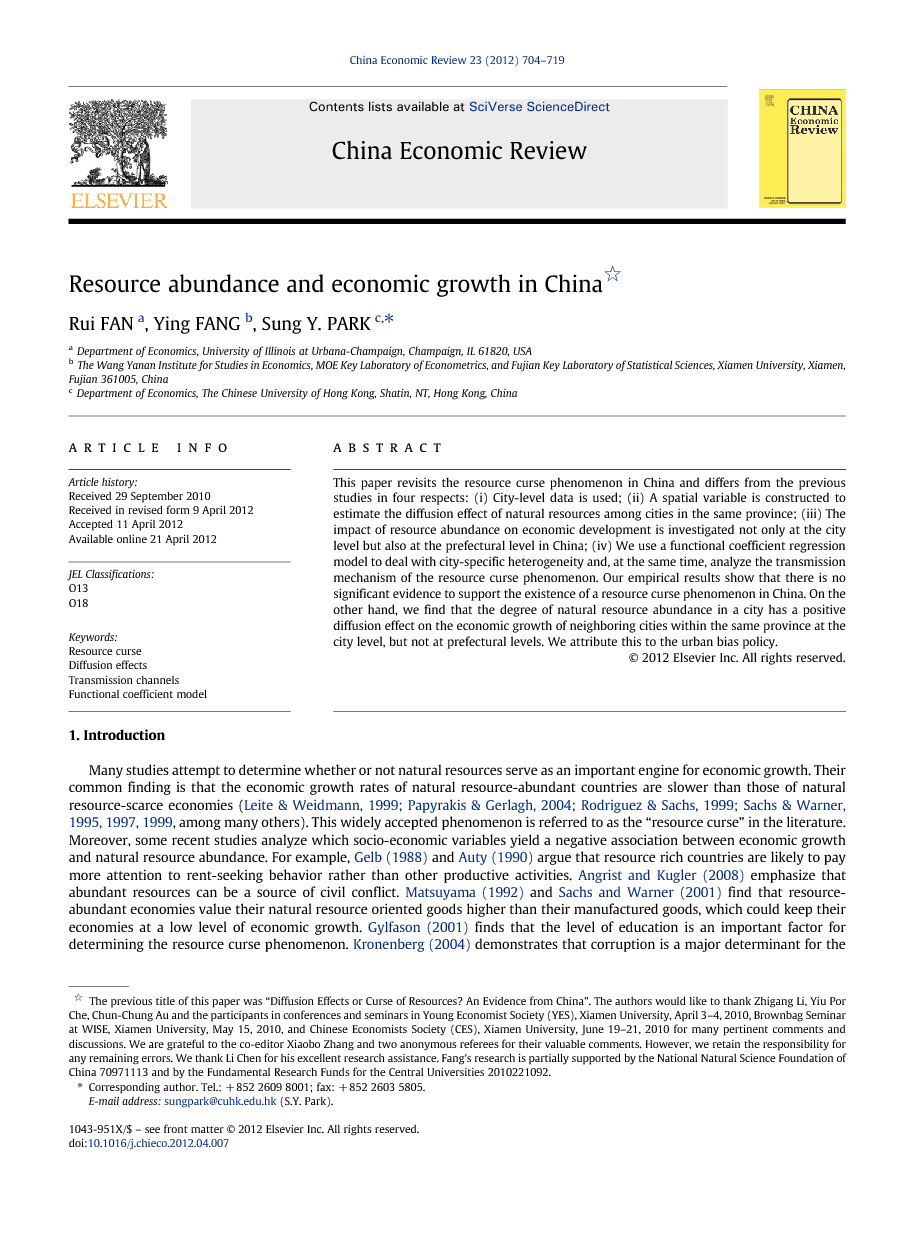 This paper revisits the resource curse phenomenon in China and differs from the previous studies in four respects: (i) City-level data is used; (ii) A spatial variable is constructed to estimate the diffusion effect of natural resources among cities in the same province; (iii) The impact of resource abundance on economic development is investigated not only at the city level but also at the prefectural level in China; (iv) We use a functional coefficient regression model to deal with city-specific heterogeneity and, at the same time, analyze the transmission mechanism of the resource curse phenomenon. Our empirical results show that there is no significant evidence to support the existence of a resource curse phenomenon in China. On the other hand, we find that the degree of natural resource abundance in a city has a positive diffusion effect on the economic growth of neighboring cities within the same province at the city level, but not at prefectural levels. We attribute this to the urban bias policy.

We find that city-specific heterogeneity plays an important role in explaining the association between resource abundance and economic growth. This association is much more complicated than what is analyzed in a simple linear model. It may be a conceptual mistake misleading to summarize the complicated relationship into a binary situation: resource curse or resource blessing. Benefitting from the functional-coefficient setup and the nonparametric estimation, we identify nonlinearity in the impact of resource abundance on economic growth and also in the transmission channels. For example, we find that the impact of natural resources on economic growth depends on the level of industrialization of the area. At the city level, relatively under-industrialized cities can benefit more from resource abundance than those industrialized ones. Hence, policy makers should differentiate between areas when implementing policies. Contrary to the findings of many studies, we find empirical evidence against the hypothesis of the existence of the resource curse by using a specific resource measurement, the average fraction of workers in the mining industry compared to the total local population. We show that the previous measures of resource abundance possibly mistakenly categorize less-developed regions into the resource-abundant group. However, as we indicated, our resource measure might have its own limits. Our future research lies in developing new measures, particularly some direct measures of natural resources to test the robustness of our results. Identifying the association between resource abundance and economic development also crucially depends on how to economic development is measured. Although most studies employ GDP-based statistics to measure economic development, we realize that GDP is an imperfect indicator of people's welfare as it does not include the environmental pollution from exploring and developing natural resources. In particular, according to Chinese laws, any natural resources beneath the ground belong to the government. Zhang et al. (2008) find that resource-rich areas have higher ratio of state sector to private sector investments, on average, than in resource-poor areas. The state sector may obtain most benefit from the extraction of resources while the local community receives very little yet endure all the negative externalities. Due to a lack of data to measure people's welfare, our results are suggestive only. Further studies are called for once more data on either income or consumption at the city level becomes available. This argument also relates to the urban bias policy in China. Despite most natural resources being located in rural areas, we find that the diffusion effect is not robust for rural cases. However, a significantly positive diffusion effect exists among cities within the same province. We attribute this difference to the urban bias policy. Although the government has gradually liberalized the prices of most natural resources since 1994, state-owned firms still control the operation of the exploration and mining of large-scale reserves while the private sector can only mine small-scale reserves (Zhang, et al., 2008). The change of urban bias policy needs policy makers to set up new policies more aligned with the interests of local residents.