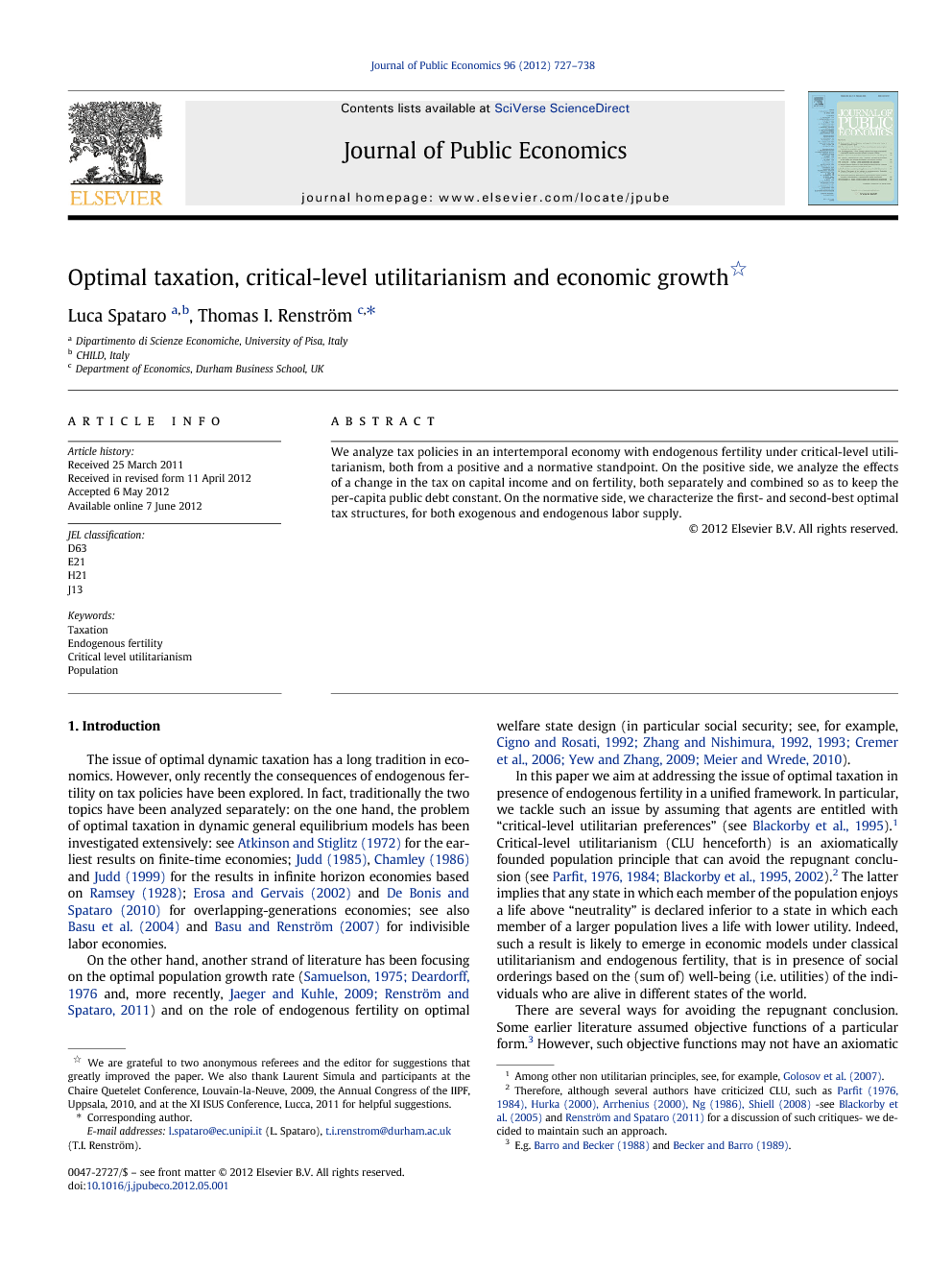 We analyze tax policies in an intertemporal economy with endogenous fertility under critical-level utilitarianism, both from a positive and a normative standpoint. On the positive side, we analyze the effects of a change in the tax on capital income and on fertility, both separately and combined so as to keep the per-capita public debt constant. On the normative side, we characterize the first- and second-best optimal tax structures, for both exogenous and endogenous labor supply.

The issue of optimal dynamic taxation has a long tradition in economics. However, only recently the consequences of endogenous fertility on tax policies have been explored. In fact, traditionally the two topics have been analyzed separately: on the one hand, the problem of optimal taxation in dynamic general equilibrium models has been investigated extensively: see Atkinson and Stiglitz (1972) for the earliest results on finite-time economies; Judd (1985), Chamley (1986) and Judd (1999) for the results in infinite horizon economies based on Ramsey (1928); Erosa and Gervais (2002) and De Bonis and Spataro (2010) for overlapping-generations economies; see also Basu et al. (2004) and Basu and Renström (2007) for indivisible labor economies. On the other hand, another strand of literature has been focusing on the optimal population growth rate (Samuelson, 1975 and Deardorff, 1976 and, more recently, Jaeger and Kuhle, 2009 and Renström and Spataro, 2011) and on the role of endogenous fertility on optimal welfare state design (in particular social security; see, for example, Cigno and Rosati, 1992, Zhang and Nishimura, 1992, Zhang and Nishimura, 1993, Cremer et al., 2006, Yew and Zhang, 2009 and Meier and Wrede, 2010). In this paper we aim at addressing the issue of optimal taxation in presence of endogenous fertility in a unified framework. In particular, we tackle such an issue by assuming that agents are entitled with “critical-level utilitarian preferences” (see Blackorby et al., 1995).1 Critical-level utilitarianism (CLU henceforth) is an axiomatically founded population principle that can avoid the repugnant conclusion (see Parfit, 1976, Parfit, 1984, Blackorby et al., 1995 and Blackorby et al., 2002).2 The latter implies that any state in which each member of the population enjoys a life above “neutrality” is declared inferior to a state in which each member of a larger population lives a life with lower utility. Indeed, such a result is likely to emerge in economic models under classical utilitarianism and endogenous fertility, that is in presence of social orderings based on the (sum of) well-being (i.e. utilities) of the individuals who are alive in different states of the world. There are several ways for avoiding the repugnant conclusion. Some earlier literature assumed objective functions of a particular form.3 However, such objective functions may not have an axiomatic foundation. We believe an axiomatic foundation is important, especially since tax policy affects births and the government then indirectly is determining whether some individuals will live or not. In fact, in a twin paper (Renström and Spataro, 2011) we have shown that CLU4 can deliver a steady-state equilibrium entailing an interior solution for the rate of growth of population, provided that the critical level belongs to a positive, open interval. We recall here that the critical level α can be defined as the utility level of an extra-individual i who, if added to an otherwise unaffected population N with utility distribution u, would make the two alternatives socially indifferent, i.e. (N,u) as good as (N,u;i,α). In the present work, we contribute to the field of second best taxation and endogenous fertility, in general equilibrium, under CLU, both from a positive and a normative standpoint. To the best of our knowledge, this has not been done before. The paper is organized as follows: after presenting the model, in Section 3 we characterize the steady-state equilibrium and, in Section 4 we perform a comparative statics analysis in order to assess the effect of taxes on the equilibrium levels of consumption, capital and population growth rate. Moreover, in Section 5 we characterize the optimal structure of taxes both in the absence and in the presence of endogenous labor supply. Finally, in Section 6 we will extend the analysis to the case of linear costs for childbearing.

In the present work we tackle the issue of taxation in the presence of endogenous fertility and under critical-level utilitarian preferences and childbearing costs. From a positive standpoint we show that in the presence of childbearing costs an increase in the tax on the family size decreases the population growth rate and increases steady-state per-capita consumption, without affecting per-capita capital stock; on the other hand, an increase in the capital income tax reduces both steady-state capital intensity and population growth rate, while in the case of convex (linear) childbearing costs has ambiguous (positive) effects on per-capita consumption. However, the increase of the capital income tax creates temporary population and consumption bursts and reduces the steady-state per-capita capital stock, while an increase in the population tax does not. We have also analyzed the effects of a fiscal policy aiming at redistributing the tax burden in such a way to maintain per-capita debt unchanged. The latter tax reform implies that capital intensity and the population growth rate move in the same direction as the change in the tax on population size, while consumption can move in either direction in the presence of convex childbearing costs, or changes in the opposite direction of the population tax rate under linear childbearing costs and nonnegative debt. Surprisingly enough, on policy grounds the latter result suggests that an economy that aims to increase population growth but is burdened by high public debt (such as Italy) could reduce capital income taxes and increase the tax on the family size correspondently, such that, in the long run, both the rate of growth of population and the capital intensity would be increased. Unfortunately, this could happen at the cost of experiencing a reduction in the long run per-capita consumption and a temporary reduction of the same population rate of growth. As far as the normative analysis is concerned, we show that, at the steady state the first-best policy entails zero capital income tax and zero debt and positive taxation of the family size, no matter whether labor supply is endogenous or not. However, when only a second-best tax structure can be implemented, then positive taxation of capital income and negative debt turn out to be optimal in case labor supply is exogenously fixed. Finally, the zero capital income tax result arises also in our model when labor supply is endogenous, provided that any constraints on the labor income taxes are not binding. If leisure is a non-inferior good the labor income tax is positive and debt negative. We show that the above normative-tax results hold regardless the shape of the childbearing cost function.