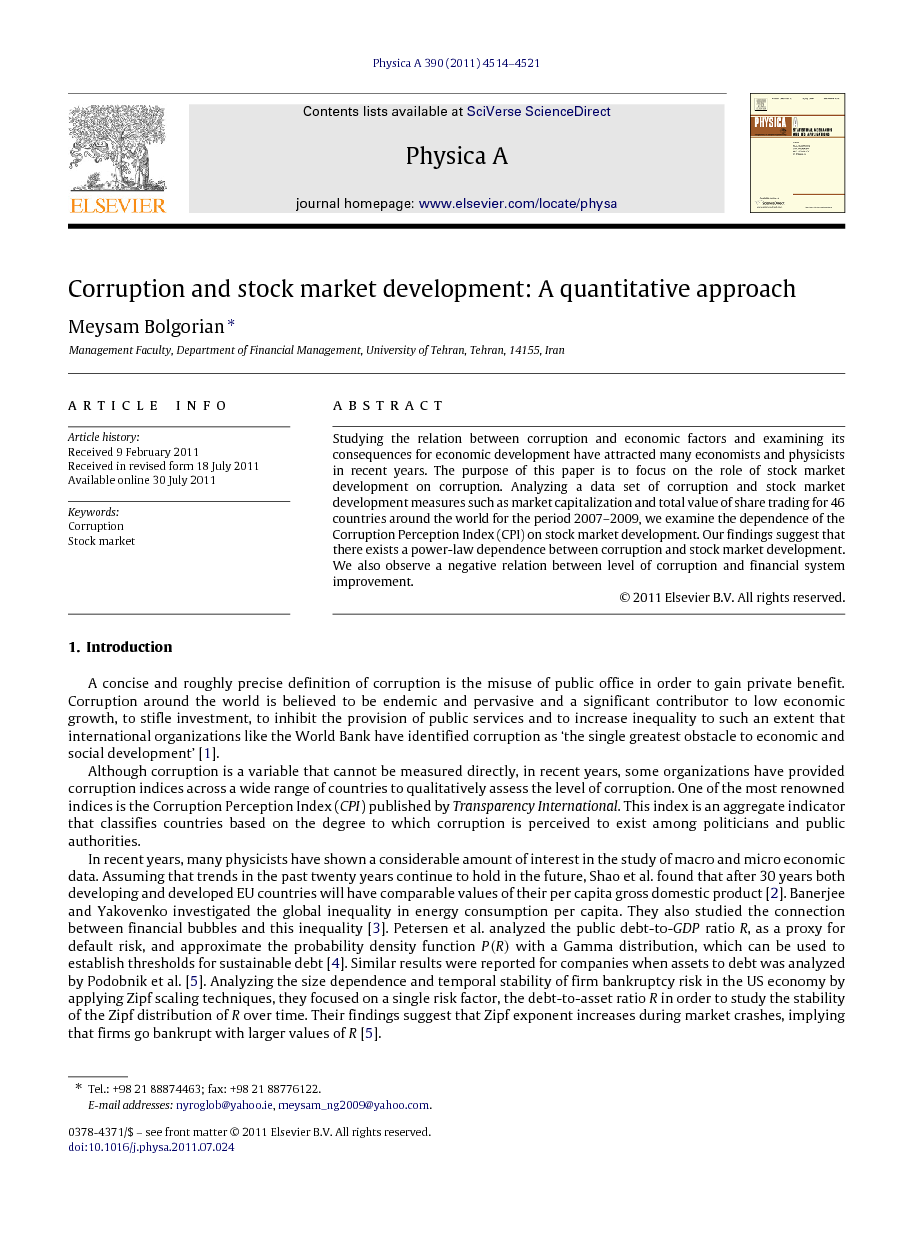 A concise and roughly precise definition of corruption is the misuse of public office in order to gain private benefit. Corruption around the world is believed to be endemic and pervasive and a significant contributor to low economic growth, to stifle investment, to inhibit the provision of public services and to increase inequality to such an extent that international organizations like the World Bank have identified corruption as ‘the single greatest obstacle to economic and social development’ [1]. Although corruption is a variable that cannot be measured directly, in recent years, some organizations have provided corruption indices across a wide range of countries to qualitatively assess the level of corruption. One of the most renowned indices is the Corruption Perception Index (CPICPI) published by Transparency International. This index is an aggregate indicator that classifies countries based on the degree to which corruption is perceived to exist among politicians and public authorities. In recent years, many physicists have shown a considerable amount of interest in the study of macro and micro economic data. Assuming that trends in the past twenty years continue to hold in the future, Shao et al. found that after 30 years both developing and developed EU countries will have comparable values of their per capita gross domestic product [2]. Banerjee and Yakovenko investigated the global inequality in energy consumption per capita. They also studied the connection between financial bubbles and this inequality [3]. Petersen et al. analyzed the public debt-to-GDPGDP ratio RR, as a proxy for default risk, and approximate the probability density function P(R)P(R) with a Gamma distribution, which can be used to establish thresholds for sustainable debt [4]. Similar results were reported for companies when assets to debt was analyzed by Podobnik et al. [5]. Analyzing the size dependence and temporal stability of firm bankruptcy risk in the US economy by applying Zipf scaling techniques, they focused on a single risk factor, the debt-to-asset ratio RR in order to study the stability of the Zipf distribution of RR over time. Their findings suggest that Zipf exponent increases during market crashes, implying that firms go bankrupt with larger values of RR [5]. Another strand of the literature has examined the relationship between corruption and macro and micro economic factors. Some of these studies reported a negative relation between corruption and country wealth factors like GDPGDP indicating that the higher level of corruption, the higher the level of poverty [6], [7], [8] and [9]. Recently a number of empirical studies examine the effects of corruption on financial markets. Asset prices are determined based on future cash flows, therefore, they are good measures for evaluating the cost of corruption from the investors’ points of view [10], [11] and [12]. This paper is closely in alignment with two recent works which examined the quantitative dependence of corruption and economic factor [9] and [13]. In Ref. [13], for the period 1999–2004, Podobnik et al. found on average that an increase of CPICPI by one unit leads to an increase of the annual GDPGDP per capita growth rate by 1.7%. They also analyzed the relation between foreign direct investments received by different countries and CPICPI, and they found a statistically significant power-law functional dependence between foreign direct investment per capita and the country’s corruption level measured by the CPICPI. By regressing only the European countries with transition economies, they also found that an increase of CPICPI by one unit generates an increase of the annual GDPGDP per capita growth rate by 2.4%. They introduce a new measure to quantify the relative corruption between countries based on their respective wealth as measured by GDPGDP per capita. Although these works provided very important findings about the significant negative relation between level of corruption and macroeconomic factors like GDPGDP growth rate and foreign investment, it appears to that these findings are related to positive economics. Positive economics is the part of economics that deals with the explanation and description of economic phenomena. It concentrates on cause-and-effect behavioral relationships and comprises the development and hypothesis testing of economics theories. This is while findings of the present work are important for economic policy makers from both a positive and normative point of view. Normative economics is the branch of economics that states normative judgements about economic and provides an ideal or standard model for economic mechanisms. In other words, normative economics expresses what the economy must to be like or what purposes of public policy ought to be. In this paper the hypothesis that there exists a power-law dependence between corruption level and stock market development across different countries is tested. We normalized the stock market development levels by the size of their wealth (defined here as Gross Domestic Product (GDPGDP)) to eliminate the differences in countries’ economic capabilities. The findings of this paper, on the one hand, suggest a direct relation between financial system development and level of economic transparency. On the other hand, these findings indirectly provide vary important suggestions about the economic growth. Although interaction of corruption and financial system in order to promote the economic growth is very intricate, at a first glance one can say that the development of the financial system will affect growth only if corruption is under control. This statement explicitly indicates that these two factors are complements. Recent work by Ahlin and Pang [14] reported that low corruption and financial development both facilitate the undertaking of productive projects and consequently lead to higher economic growth. These findings indicate that corruption control and financial development are substitutes rather than complements. They argue that this substitutability arises because corruption raises the need for liquidity and thus makes financial improvements more potent; conversely, financial underdevelopment makes corruption more onerous and thus raises the gains from reducing it. In this situation financial system improvements of the more corrupt countries pay the highest growth dividends. Aid targeted towards financial systems could then best be spent on corrupt countries [14]. The outline of this paper is as follows. In Section 2 data and empirical results are provided. A conclusion is given in Section 3.

In this paper we preformed a quantitative analysis for investigating the relation between corruption and stock market development. In summary we observed a statistically significant power-law dependence between level of corruption and stock market development. We also found that the scaling behavior has a decreasing trend in recent years which is consistent with findings in Ref. [9]. Furthermore, these findings have very important implications for economic policy makers inciting them to improve their financial systems in order to reduce the level of corruption which consequently leads to more economic growth.