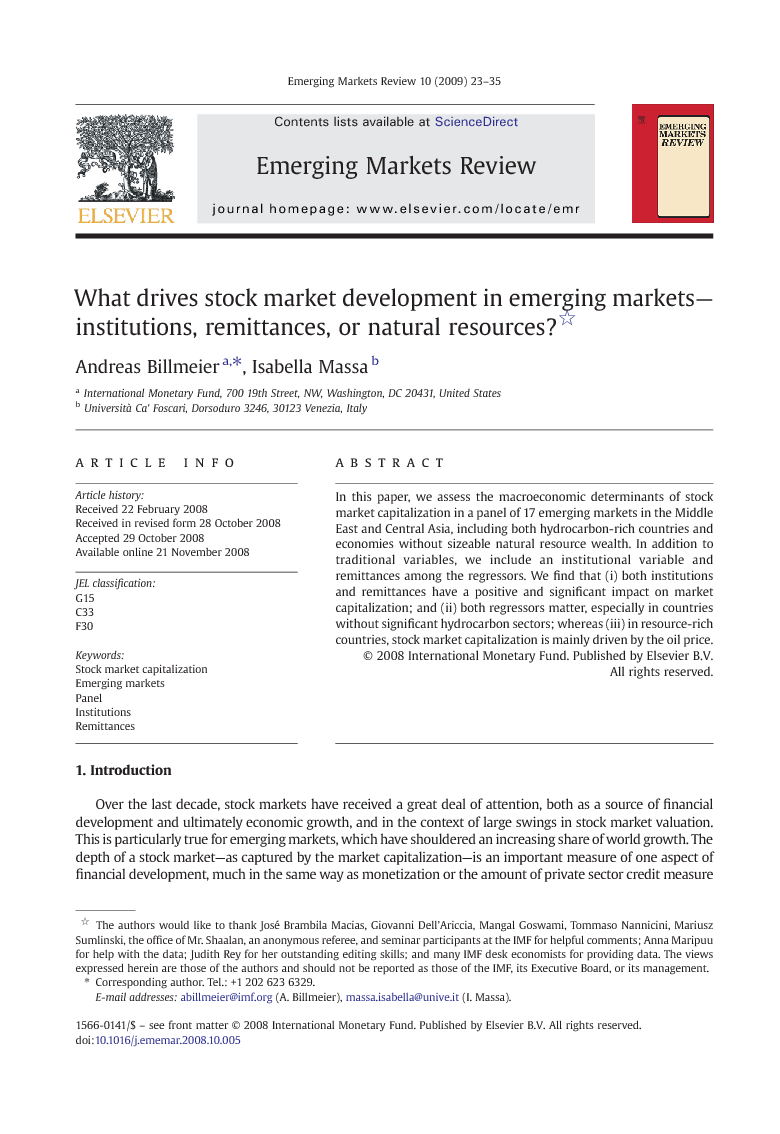 In this paper, we assess the macroeconomic determinants of stock market capitalization in a panel of 17 emerging markets in the Middle East and Central Asia, including both hydrocarbon-rich countries and economies without sizeable natural resource wealth. In addition to traditional variables, we include an institutional variable and remittances among the regressors. We find that (i) both institutions and remittances have a positive and significant impact on market capitalization; and (ii) both regressors matter, especially in countries without significant hydrocarbon sectors; whereas (iii) in resource-rich countries, stock market capitalization is mainly driven by the oil price.

Over the last decade, stock markets have received a great deal of attention, both as a source of financial development and ultimately economic growth, and in the context of large swings in stock market valuation. This is particularly true for emerging markets, which have shouldered an increasing share of world growth. The depth of a stock market—as captured by the market capitalization—is an important measure of one aspect of financial development, much in the same way as monetization or the amount of private sector credit measure the depth of financial intermediation. In fact, commercial banking and stock markets both contribute in a major way to the transformation of savings into investment, thereby enabling financial development and economic growth. However, it is not clear, a priori, whether these two types of financial markets should be considered complements or substitutes. While research on stock markets in many emerging markets—especially Latin America—abounds, relatively little of the recent research interest in financial markets has been directed at the Middle East and Central Asia. This region comprises some of the richest countries in the world, endowed with vast resources of oil and gas, but also relatively “new” countries with substantially lower per capita income on the territory of the former Soviet Union (FSU), many of which do not dispose of a natural resource endowment. In the resource-rich Middle East, stock markets have experienced large fluctuations over the last few years. 1 Economies in Central Asia have also seen a rise in stock market capitalization but have come under some scrutiny for unprecedented banking credit booms, an issue we will not pursue further here. 2 To better understand what drives stock market development in this region, we explore in this paper the macroeconomic determinants of stock market capitalization in a panel of 17 economies that form part of the IMF's Middle East and Central Asia Department (MCD). In addition to traditional regressors (stock market turnover, income, saving/investment, domestic credit), we are interested in whether three additional factors are of particular relevance in this context. First, we focus on the effect of hydrocarbon wealth on stock market capitalization. We refrain, however, from using estimated hydrocarbon wealth as a regressor, chiefly due to the data weaknesses associated with this variable (variation over time due to new discoveries, oil price changes, etc.). Instead, we distinguish between oil-rich and other economies simply by means of splitting the country sample into hydrocarbon-exporting and importing countries.3 Second, we are interested in institutions. Since the FSU economies have existed for only about 15 years, one might expect that their rather “new” institutions may play a different role than those in the Middle East. Furthermore, we expect “good” institutions to have a positive impact, not only on stock market investors, who feel more confident for example regarding property rights and information transparency, but also on firms, which may consider equity as a potential source of financing. Third, the region is characterized by two supranational labor markets which, driven by hydrocarbon resource endowments, induce large remittance flows. While many Egyptians, Moroccans, and Pakistani nationals seek economic fortune in the Gulf, a similar type of regional labor mobility exists between FSU economies. These regional movements of labor result in remittances that can play a major role in enhancing disposable income of those in the home country. In fact, worldwide (recorded) remittances have amounted to US$226 billion in 2004, having grown faster than private capital flows and official development assistance in developing countries during the decade 1995–2004. In Jordan, for example, remittances transferred through the banking system amounted to 18% of GDP in 2002; unofficial remittances may add 50% or more on top of recorded flows.4Table 1 provides some insights into the large impact of remittances on disposable income and, potentially, financial development if households smooth their consumption over time. Table 1. Remittances in selected economies (in percent of GDP) 1995–1999 2000–2005 Bahrain − 10.5 − 11.6 Jordan 16.7 17.1 Lebanon 5.7 10.7 Morocco 5.7 8.3 Oman − 9.8 − 7.6 Qatar − 10.2 − 7.8 Saudi Arabia − 9.5 − 7.0 Sources: Country authorities; IMF desk economists. Note: Negative entries represent remittances source countries. Table options Most of these remittances are, as part of disposable income, likely to be spent immediately on consumption. Some share, however, may be used to smooth consumption over time, and spending could in fact be delayed via saving and investing in the stock market, especially if typical vehicles for asset accumulation, such as pension funds, are underdeveloped or not deemed trustworthy. As more investment in the stock market leads ultimately to a rise in market capitalization, we expect remittances to have a positive impact on stock market development. In this paper, we find that, next to a set of traditional regressors, institutions and remittances have significant explanatory power for stock market capitalization in our panel, which is consistent with our expectations. The impact, however, is dramatically different between oil and non-oil economies: while, in the latter, both institutions and remittances contribute to explaining stock market capitalization, the impact of these variables is muted when only resource-rich countries are considered. In their case, only the oil price appears to have explanatory power for stock market capitalization. The remainder of the paper is structured as follows. Section 2 provides a brief literature review of macroeconomic and institutional driving forces for stock market capitalization. Section 3 presents our panel regressions for stock market capitalization. We pay particular attention to the distinction between economies with a sizeable hydrocarbon endowment and those without. Section 4 offers some conclusions and policy recommendations.

Stock market development is an integral part of financial development, which is, in turn, associated with economic growth. In this paper, we have highlighted the role of selected variables—quality of institutions and remittances—in explaining stock market development. We analyzed a panel of 17 countries in the IMF's Middle East and Central Asia Department for which data were available. As the sample comprises both resource-rich economies and countries without a significant resource endowment, we have investigated whether the effect of institutions and remittances on stock market development is different in oil versus non-oil economies. In the average country contained in our panel of Middle East and Central Asia economies, good institutions and remittances contribute significantly to stock market development. Notably, this holds true especially in countries without a sizeable natural resource endowment. In hydrocarbon-rich economies, instead, oil prices explain most of the stock market boom, while neither institutions nor remittances are significant. We also broadly confirm previous results for other regressors commonly encountered in the literature. These results underline the importance of remittances, not only to improve living conditions but also as a source of private saving by means of investing in the stock market. From a policy perspective, governments should encourage and facilitate to the extent possible the uninterrupted flow of these private transfers as they contribute to financial and economic development in the longer run. We interpret the evidence regarding institutions as an indication that stock market development in resource-rich countries has been benefiting from booming oil revenues, and did not have to rely as much on government efforts to improve institutions. This does not mean that oil-exporting countries can neglect the quality of their institutions. Indeed, in the considered time span, hydrocarbon economies in the region have had a competitive advantage with respect to countries without a large resource endowment as their institutions were already of relatively high quality. As they have realized windfall gains related to rising oil prices, investor interest has increased in these stock markets, which are particularly attractive due to the opportunities in a high-income environment. Moreover, the credible U.S. dollar peg in many Gulf economies removes one additional layer of investment risk—exchange rate fluctuations. This competitive advantage, however, should not be taken for granted. Some non-hydrocarbon countries (e.g., Georgia and Pakistan) are catching up quickly to the level of institutional quality in hydrocarbon economies, and oil prices could decrease going forward. The negative impact of a decrease in oil prices will depend on the ability of each economy to diversify away from hydrocarbon-related activities to maintain a vibrant financial sector.28 Moreover, countries without a large resource endowment have seen the need to improve the quality of institutions as a successful strategy to attract foreign investment, including in the stock market. To further stock market development, countries in the region should continue to privatize state-owned firms, thereby reinvigorating economic diversification efforts away from hydrocarbon resources and encouraging investor activity in their stock markets.