عنوان انگلیسی
The impact of high government debt on economic growth and its channels: An empirical investigation for the euro area
دانلود فوری مقاله + سفارش ترجمه 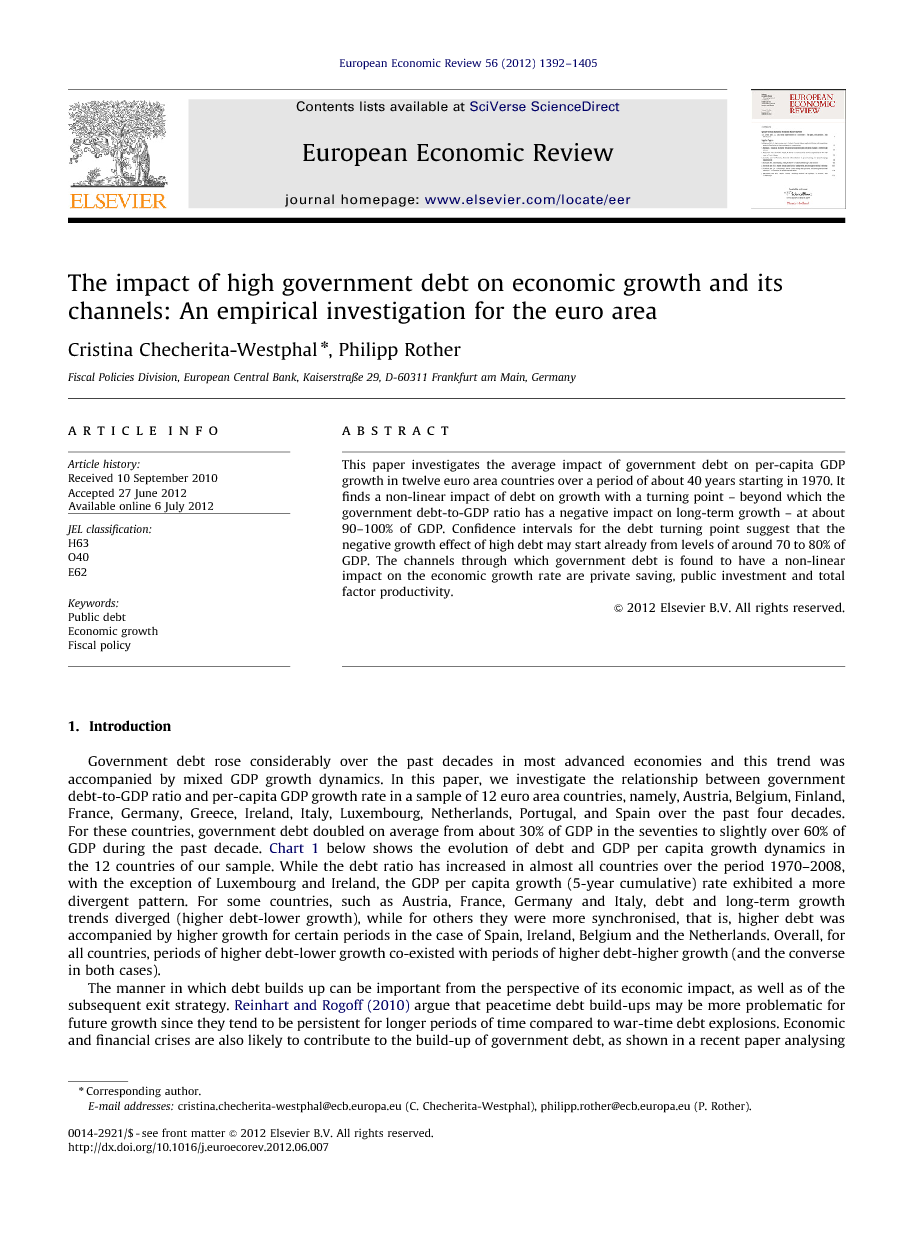 This paper investigates the average impact of government debt on per-capita GDP growth in twelve euro area countries over a period of about 40 years starting in 1970. It finds a non-linear impact of debt on growth with a turning point – beyond which the government debt-to-GDP ratio has a negative impact on long-term growth – at about 90–100% of GDP. Confidence intervals for the debt turning point suggest that the negative growth effect of high debt may start already from levels of around 70 to 80% of GDP. The channels through which government debt is found to have a non-linear impact on the economic growth rate are private saving, public investment and total factor productivity.

Government debt rose considerably over the past decades in most advanced economies and this trend was accompanied by mixed GDP growth dynamics. In this paper, we investigate the relationship between government debt-to-GDP ratio and per-capita GDP growth rate in a sample of 12 euro area countries, namely, Austria, Belgium, Finland, France, Germany, Greece, Ireland, Italy, Luxembourg, Netherlands, Portugal, and Spain over the past four decades. For these countries, government debt doubled on average from about 30% of GDP in the seventies to slightly over 60% of GDP during the past decade. Chart 1 below shows the evolution of debt and GDP per capita growth dynamics in the 12 countries of our sample. While the debt ratio has increased in almost all countries over the period 1970–2008, with the exception of Luxembourg and Ireland, the GDP per capita growth (5-year cumulative) rate exhibited a more divergent pattern. For some countries, such as Austria, France, Germany and Italy, debt and long-term growth trends diverged (higher debt-lower growth), while for others they were more synchronised, that is, higher debt was accompanied by higher growth for certain periods in the case of Spain, Ireland, Belgium and the Netherlands. Overall, for all countries, periods of higher debt-lower growth co-existed with periods of higher debt-higher growth (and the converse in both cases).The manner in which debt builds up can be important from the perspective of its economic impact, as well as of the subsequent exit strategy. Reinhart and Rogoff (2010) argue that peacetime debt build-ups may be more problematic for future growth since they tend to be persistent for longer periods of time compared to war-time debt explosions. Economic and financial crises are also likely to contribute to the build-up of government debt, as shown in a recent paper analysing severe post-World War II financial crises.1 In this context, the 2008–2009 financial and economic crisis has already put considerable strains on debt and, in general, on public finances in the euro area countries. The euro area government deficit ratio increased rapidly from 0.7% of GDP in 2007 to 6.0% of GDP in 2010, while the gross government debt ratio surged from 66 to 85% of GDP during the same period.2 Against this background, one important question refers to the economic consequences of high public debt across the euro area countries. While the economic growth rate is likely to have a linear negative impact on the public debt-to-GDP ratio (a decline in the economic growth rate is, ceteris paribus, associated with an increase in the public debt-to-GDP ratio), high levels of public debt are likely to be detrimental for growth. Potentially, this effect is non-linear in the sense that it becomes relevant only after a certain threshold has been reached. It is precisely this non-linear relationship between debt and growth that the present paper seeks to unveil, after controlling for other relevant factors. Moreover, we are interested in analysing the channels through which the build-up of government debt has a potential impact on growth in the euro area. Using various panel model specifications, including fixed-effects corrected for time autocorrelation and heteroskedasticity, as well as instrumental variable techniques, this paper finds evidence for a non-linear impact of public debt on per-capita GDP growth rate, i.e., a concave (inverted U-shape) relationship with the debt turning point at about 90–100% of GDP. This is an average threshold for the (12-country) euro area based on developments over the past four decades. Statistical confidence around this estimate indicates that the threshold may go as low as 70% of GDP. The long-term perspective is reinforced by the evidence of a similar impact of public debt on the potential/trend GDP growth rate. The channels through which public debt is likely to have a non-linear impact on the economic growth rate are found to be private saving, public investment and total factor productivity (these supporting relationships are estimated individually, while public debt may influence economic growth rate through several channels simultaneously). The remaining part of the paper is structured as follows. We first provide a literature review on the relationship between government debt and growth, with focus on the empirical part. Then we introduce the estimation model on the direct relationship between debt and growth, followed by various robustness checks, as well as by an empirical investigation of the channels through which debt may affect growth. A final section concludes. Data description and sources are presented in the Appendix.

This analysis finds evidence for a non-linear impact of public debt on per-capita GDP growth across twelve euro area countries over a long period of time starting in 1970. It unveils a concave (inverted U-shape) relationship between the public debt ratio and the economic growth rate with the debt turning point at about 90–100% of GDP. This means that public debt is associated, on average, with lower long-term growth rates at debt levels above the range of 90–100% of GDP. The long-term perspective is reinforced by the evidence of a similar impact of public debt on the potential/trend GDP growth rate. From an econometric perspective, the paper deals with the potential endogeneity problem, in particular with the issue of simultaneity or reverse causation, in various ways including: (i) using 1-year and 5-year forward growth rates, as well as the potential and trend GDP growth rates, to mitigate/eliminate the impact of the economic cycle; (ii) using a quadratic relationship in debt, while the linear one (which would be implied by the converse relation, i.e., lower economic growth induces, ceteris paribus, a higher debt-to-GDP ratio) is not found to be significant; (iii) using instrumental variable estimation models. It should be noted that the econometric results and the economic interpretation rest on the analysis of the long time period since 1970. Thus they apply to what could be broadly called “normal” economic times, some short-term disruptions in past decades notwithstanding. The public debt threshold of 90–100% of GDP is an average for the (12-country) euro area and its statistical confidence may go as low as 70% of GDP. This suggests that for many countries current debt levels may already have a detrimental impact on GDP growth, given that the euro area average debt-to-GDP ratio is already above the lower confidence threshold. The channels through which public debt is found to have a non-linear impact on economic growth rate are private saving, public investment and total factor productivity. While these relationships are estimated individually, public debt may influence economic growth rate through several channels simultaneously.