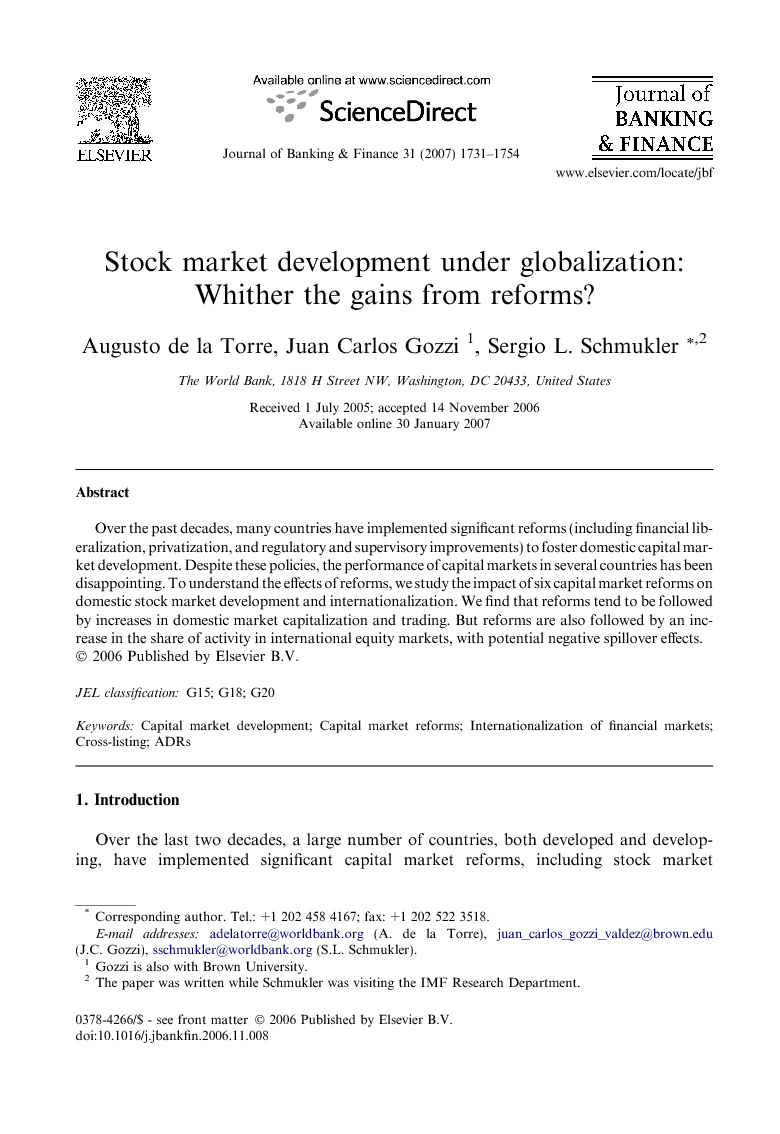 Over the past decades, many countries have implemented significant reforms (including financial liberalization, privatization, and regulatory and supervisory improvements) to foster domestic capital market development. Despite these policies, the performance of capital markets in several countries has been disappointing. To understand the effects of reforms, we study the impact of six capital market reforms on domestic stock market development and internationalization. We find that reforms tend to be followed by increases in domestic market capitalization and trading. But reforms are also followed by an increase in the share of activity in international equity markets, with potential negative spillover effects.

In this paper, we analyze the impact of capital market-specific and related reforms on stock market development and internationalization. Our empirical analysis shows that these reforms are followed by increases in capitalization and trading in the local market. The evidence thus suggests that reforms are positively related to domestic stock market development, contrary to the claim that they are not effective and that the variation in panel data studies comes only from cross-country differences. However, we also find that internationalization increases after reforms, relative to both GDP and domestic market activity. This runs contrary to the view that a poor domestic environment prompts firms to access international markets and that reforms reduce incentives to migrate abroad. Rather, it supports the hypothesis that reforms make local firms more attractive, allowing them to access international markets. Our results come with some caveats. Reforms may be timed to coincide with high points in the domestic and/or international business cycles and with the implementation of other reforms. To address these issues, we control for domestic macroeconomic variables, US interest rates, and output growth in OECD countries. We find our results to be robust to the inclusion of these variables. However, these controls may not capture the full impact of other reforms and/or the business cycle. Also, some prior macroeconomic and institutional reforms may be necessary for capital market reforms to be successful. Furthermore, our reform dummies could be capturing the impact of some underlying trend driving the processes of stock market development and internationalization, not captured by the controls included in the regressions. Our robustness tests show that, when controlling for time effects in the regressions of domestic stock market development, some of the reform dummies remain statistically significant and positive, suggesting that capital market reforms are associated with increases in domestic stock market activity beyond any underlying trend. But accurately separating the impact of a common time trend from that of reforms would require longer time series of our dependent variables. Thus, more future research in this direction would be welcome. Our conclusions should thus remain tentative. But they do suggest that reforms do not result in a lower level of activity abroad and a concentration of stock market activity in the domestic market, as some arguments predict. Our findings also suggest that financial globalization could pose a significant challenge to policymakers, as their efforts to foster domestic stock market development seem to translate into more activity abroad. The migration of trading to international markets may adversely affect the liquidity of those firms that remain in the local market and their ability to raise new equity capital. This could have a significant impact on medium sized firms, which are not able to directly access international markets. The unexpected impact of reforms on internationalization calls for a revision of the reform agenda and related expectations. Further research is necessary to understand whether the impact of reforms differs across countries and regions and if differences in the timing of specific reforms affect their impact on stock market development and internationalization.30