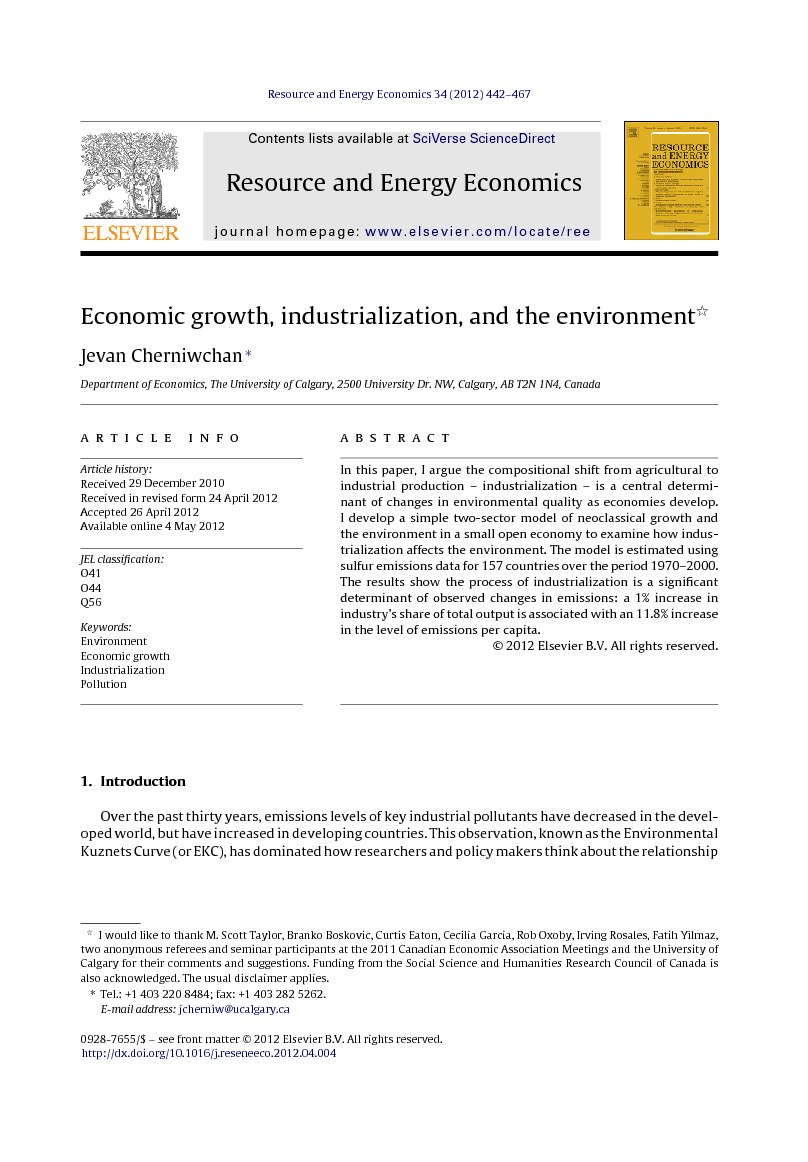 In this paper, I argue the compositional shift from agricultural to industrial production – industrialization – is a central determinant of changes in environmental quality as economies develop. I develop a simple two-sector model of neoclassical growth and the environment in a small open economy to examine how industrialization affects the environment. The model is estimated using sulfur emissions data for 157 countries over the period 1970–2000. The results show the process of industrialization is a significant determinant of observed changes in emissions: a 1% increase in industry's share of total output is associated with an 11.8% increase in the level of emissions per capita.

This paper presented a simple two-sector model of neoclassical growth in a small open economy to investigate the relationship between growth and environmental outcomes. Most existing research in this area has come through the lens of the EKC, but existing theories have not come to grips with three relevant features of the data: (i) there has been a great deal of cross-country convergence in pollution emissions over time, (ii) there is substantial variation in the emission intensities of industrial pollutants across both over time and across countries, and (iii) pollution abatement costs have been a small and constant fraction of GDP in the industrialized world. This paper provides a theory of growth and the environment that also explains these other features. The theory showed how the EKC can arise during the transition from agricultural production to industrial production as economies develop. As countries develop and accumulate capital, pollution levels increase as a result of increases in the scale of production as more output is produced, and through shifts in the composition of output towards pollution intensive industrial production. Initially these increases overwhelm the pollution reducing effect of technological progress. As development proceeds and diminishing returns to capital set in, growth and compositional changes slow; as a result technological progress in abatement occurs faster than emissions growth and emissions levels fall. Such changes in scale, composition and technique as countries industrialize generate an EKC. Although the theory showed why an EKC could arise through industrialization, it is not a necessary result. Instead the theory predicted cross country convergence in emissions as economies industrialize. To evaluate this prediction I derived an estimating equation directly from the theory by log-linearizing the model around the balanced growth path. The empirical results showed that the process of industrialization is a significant determinant of observed changes in sulfur emissions, supporting the theory's prediction: a 1% increase in industry's share of total output is associated with an 12% increase in the level of emissions per capita.