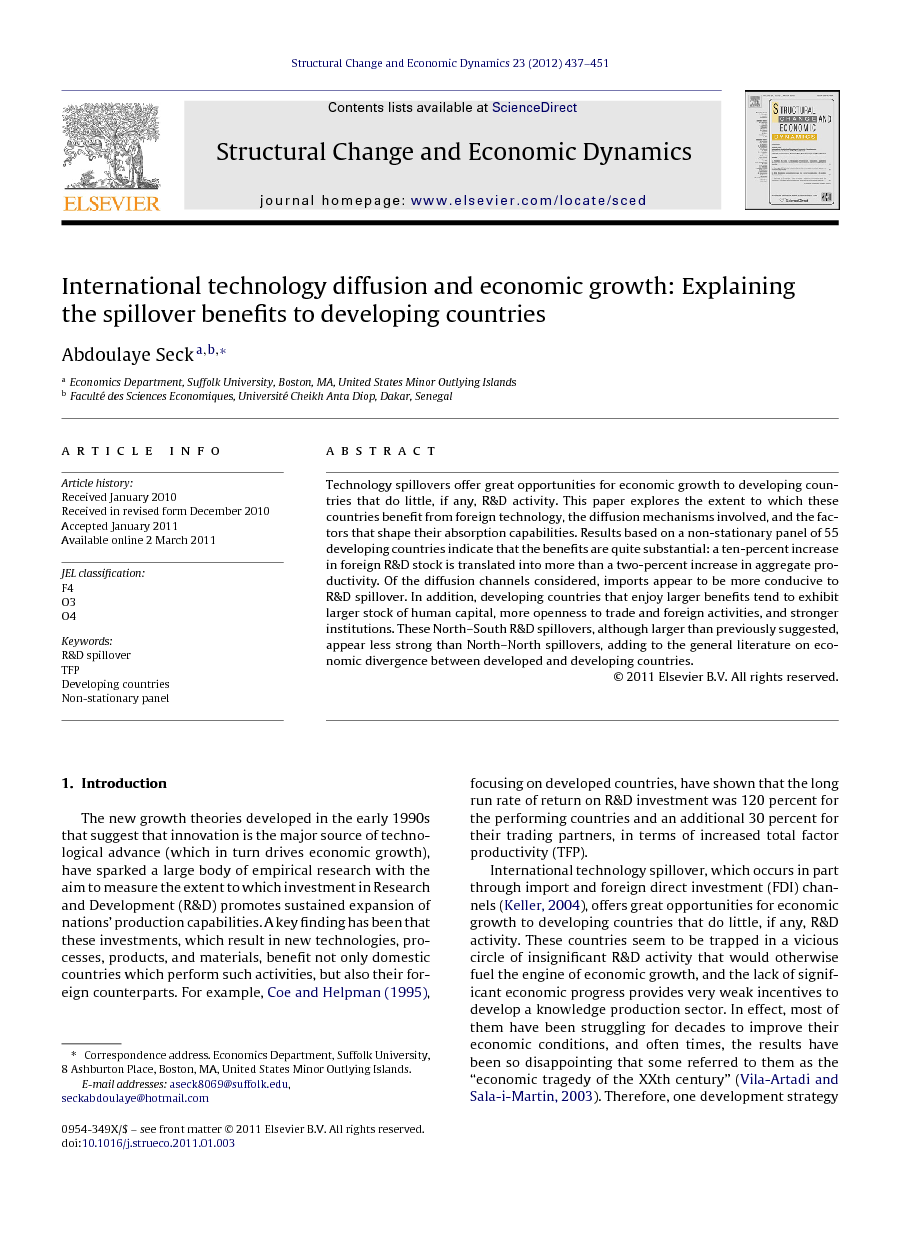 Technology spillovers offer great opportunities for economic growth to developing countries that do little, if any, R&D activity. This paper explores the extent to which these countries benefit from foreign technology, the diffusion mechanisms involved, and the factors that shape their absorption capabilities. Results based on a non-stationary panel of 55 developing countries indicate that the benefits are quite substantial: a ten-percent increase in foreign R&D stock is translated into more than a two-percent increase in aggregate productivity. Of the diffusion channels considered, imports appear to be more conducive to R&D spillover. In addition, developing countries that enjoy larger benefits tend to exhibit larger stock of human capital, more openness to trade and foreign activities, and stronger institutions. These North–South R&D spillovers, although larger than previously suggested, appear less strong than North–North spillovers, adding to the general literature on economic divergence between developed and developing countries.

The new growth theories developed in the early 1990s that suggest that innovation is the major source of technological advance (which in turn drives economic growth), have sparked a large body of empirical research with the aim to measure the extent to which investment in Research and Development (R&D) promotes sustained expansion of nations’ production capabilities. A key finding has been that these investments, which result in new technologies, processes, products, and materials, benefit not only domestic countries which perform such activities, but also their foreign counterparts. For example, Coe and Helpman (1995), focusing on developed countries, have shown that the long run rate of return on R&D investment was 120 percent for the performing countries and an additional 30 percent for their trading partners, in terms of increased total factor productivity (TFP). International technology spillover, which occurs in part through import and foreign direct investment (FDI) channels (Keller, 2004), offers great opportunities for economic growth to developing countries that do little, if any, R&D activity. These countries seem to be trapped in a vicious circle of insignificant R&D activity that would otherwise fuel the engine of economic growth, and the lack of significant economic progress provides very weak incentives to develop a knowledge production sector. In effect, most of them have been struggling for decades to improve their economic conditions, and often times, the results have been so disappointing that some referred to them as the “economic tragedy of the XXth century” (Vila-Artadi and Sala-i-Martin, 2003). Therefore, one development strategy could consist of looking at different ways to enable these countries to benefit from international technology diffusion. This paper sets out to explore the extent to which developing countries gain from technology spillover, and the factors that explain the potential heterogeneity in their absorption capabilities. The influential work by Coe and Helpman (1995) has generated a fair amount of follow-up research that aimed at deepening the understanding of technology spillover.1 The literature has been extended into a couple of directions (Coe et al., 2008): the measurement of foreign R&D capital stock to account for the different diffusion channels, the model specification (controlling for additional relevant factors that explain the spillover mechanism), and the econometric techniques used (panel cointegration). Despite the large body of empirical works, little attention has been paid to developing countries; most of the contributions look at North–North technology spillover. One of the few papers that focus on North–South spillovers is Coe et al. (1997). Using a dataset of 22 developed countries as in Coe and Helpman (1995), along with 77 developing countries, the authors show that the latter can substantially benefit from the stock of knowledge developed in advanced countries. A key finding suggests that a ten-percent increase in the R&D capital stock in developed countries generates a 0.6-percent increase in TFP in developing countries. The only diffusion channel considered is imports of machinery and equipment. The results also suggest important differences in developing countries’ gains from foreign R&D: more open countries where trade is more oriented towards developed countries that do more R&D are the ones that tend to gain the most from technology externalities (e.g. Latin American countries vis-a-vis the US). The paper addresses some limitations to Coe et al. (1997) in studying North–South technology spillover, and to a lesser extent to other papers in the technology spillover literature. First, it considers two of the many diffusion channels, namely imports and FDI, allowing for the determination of which channel is more conducive to R&D spillover. Second, besides openness to trade and human capital, additional sources of heterogeneity in the spillover gains are considered, such as social and economic institutions: the World Bank ease of doing business, the index of patent protection, and the historical origin of the legal systems. Last, the paper considers more advanced econometric techniques in the panel cointegration econometrics, the so-called second generation panel unit root tests and the estimation methods that outperform the regular OLS method by addressing the potential endogeneity of the regressors and the serial correlation in the error term – all of which that were not fully worked out at that time. A dataset of 55 developing countries and the seven most-industrialized countries (G7) is considered. A panel cointegration model is developed that relates TFP to foreign R&D capital stocks, as well as different interactions to allow for heterogeneity in the absorption and assimilation of foreign technology. Because the paper is interested in import- and FDI-related spillovers, the foreign R&D capital stock is constructed using alternatively bilateral import of machinery and equipment and FDI shares as weights. The statistical inference is based on the Fully Modified Ordinary Least Squares. The paper suggests the following key results. The R&D spillover gains are quite substantial. Both import and inbound-FDI are significant channels through which technology diffuses from advanced to developing countries, and most of the gains are carried through the first channel. In addition, the benefits are more substantial than the results from Coe et al. (1997) indicate, but less than the results from North–North technology spillover. Furthermore, the differences in the spillover gains among developing countries appear to be attributable to factors such as human capital, openness, and institutions. The remainder of the paper is organized as follows. The next section introduces the empirical model. Section 3 describes the data and some key features derived from them. Section 4 presents both the test results related to the use of non stationary panel and the empirical evidence on how developing countries gain from technology spillover. Section 5 offers a summary and some concluding remarks.

The literature that searches for R&D spillover has suggested that the return on investment in new technology is not confined within the performing countries, but that some benefits spill over to foreign countries with relatively strong economic ties. Consequently, international knowledge spillover could offer growth opportunities to developing countries that do little, if any, R&D activity, provided that they develop significant absorption capabilities in order to reap the subsequent benefits. This paper asked how and why some developing countries may exhibit stronger absorption capabilities of knowledge spillover (rather than rent spillovers) than others. The main contributions to the North–South R&D spillover literature are threefold. First the paper considered two of the many diffusion channels, namely imports and FDI. Second, it considered additional sources of heterogeneity that have been proven to play a significant role in technology spillover among developed countries, e.g. economic and social institutions. Last, the paper used an improved panel cointegration technique that was not fully worked out a decade ago. Some key answers based on a sample of 55 developing countries along with the G7 countries and using the FMOLS estimation technique first suggested that the spillover gains are quite substantial: a ten percent increase in a developing country's foreign R&D capital stock leads to more than a two percent increase in its total factor productivity. Much of this spillover gain occurs through the import channel. The results also suggested significant heterogeneity in the spillover gains. Cross-country differences in the absorption and assimilation capacity have to do with the openness to international trade and FDI, the stock of human capital measured by the average years of schooling, and the quality of the institutions (e.g. ease of doing business, property rights, legal traditions). As for policy implications, developing countries wanting to benefit from international technology diffusion definitely have to design policies that not only take into account the diffusion channels, but also the right set of domestic institutions.