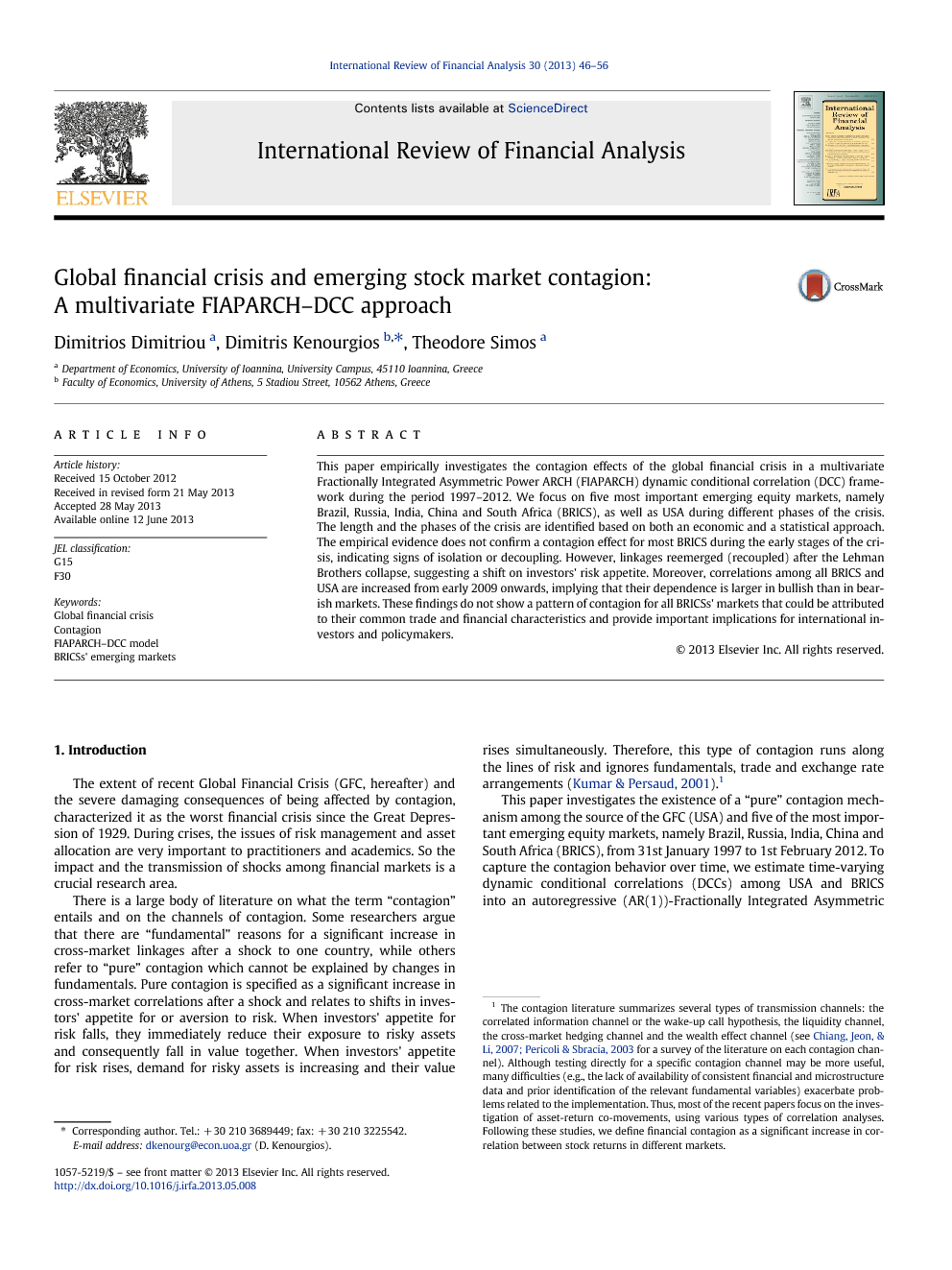 This paper empirically investigates the contagion effects of the global financial crisis in a multivariate Fractionally Integrated Asymmetric Power ARCH (FIAPARCH) dynamic conditional correlation (DCC) framework during the period 1997–2012. We focus on five most important emerging equity markets, namely Brazil, Russia, India, China and South Africa (BRICS), as well as USA during different phases of the crisis. The length and the phases of the crisis are identified based on both an economic and a statistical approach. The empirical evidence does not confirm a contagion effect for most BRICS during the early stages of the crisis, indicating signs of isolation or decoupling. However, linkages reemerged (recoupled) after the Lehman Brothers collapse, suggesting a shift on investors' risk appetite. Moreover, correlations among all BRICS and USA are increased from early 2009 onwards, implying that their dependence is larger in bullish than in bearish markets. These findings do not show a pattern of contagion for all BRICSs' markets that could be attributed to their common trade and financial characteristics and provide important implications for international investors and policymakers.

The extent of recent Global Financial Crisis (GFC, hereafter) and the severe damaging consequences of being affected by contagion, characterized it as the worst financial crisis since the Great Depression of 1929. During crises, the issues of risk management and asset allocation are very important to practitioners and academics. So the impact and the transmission of shocks among financial markets is a crucial research area. There is a large body of literature on what the term “contagion” entails and on the channels of contagion. Some researchers argue that there are “fundamental” reasons for a significant increase in cross-market linkages after a shock to one country, while others refer to “pure” contagion which cannot be explained by changes in fundamentals. Pure contagion is specified as a significant increase in cross-market correlations after a shock and relates to shifts in investors' appetite for or aversion to risk. When investors' appetite for risk falls, they immediately reduce their exposure to risky assets and consequently fall in value together. When investors' appetite for risk rises, demand for risky assets is increasing and their value rises simultaneously. Therefore, this type of contagion runs along the lines of risk and ignores fundamentals, trade and exchange rate arrangements (Kumar & Persaud, 2001).1 This paper investigates the existence of a “pure” contagion mechanism among the source of the GFC (USA) and five of the most important emerging equity markets, namely Brazil, Russia, India, China and South Africa (BRICS), from 31st January 1997 to 1st February 2012. To capture the contagion behavior over time, we estimate time-varying dynamic conditional correlations (DCCs) among USA and BRICS into an autoregressive (AR(1))-Fractionally Integrated Asymmetric Power ARCH (FIAPARCH) framework, and then test their statistical significance during several phases of the GFC.2 The FIAPARCH model increases the flexibility of the conditional variance specification by allowing an asymmetric response of volatility to positive and negative shocks and long-range volatility dependence. At the same time, this model allows the data to determine the power of returns for which the predictable structure in the volatility pattern is the strongest (Conrad, Karanasos, & Zeng, 2011).3 To identify the crisis period and its phases, we use both official data sources for all key financial and economic events representing the GFC (BIS, 2009 and Federal Reserve Board of St. Louis, 2009), and regimes of excess stock market volatility estimated by a Markov Switching Dynamic Regression (MS-DR, hereafter) model. Although there is an extensive literature on financial contagion during several crises of the 1980s and 1990s (see Kaminsky, Reinhardt, & Vegh, 2003, for a survey), the research on GFC is still growing. Dooley and Hutchison (2009) provide evidence on the decoupling of emerging CDS markets from early 2007 to summer 2008, while thereafter responded very strongly to the deteriorating situation in the USA financial system and real economy. Samarakoon (2011) shows evidence of contagion among USA and frontier equity markets, but not among USA and emerging markets by constructing various shock models. Using a DCC–GARCH model, Syllignakis and Kouretas (2011) capture contagion effects among US and German stock markets and seven emerging Central and Eastern Europe markets. However, studies that focus specifically on BRICSs' markets are rare. Aloui, Aissa, and Nguyen (2011) show strong evidence of dependence between BRICSs' stock markets and USA, using copulas functions. Kenourgios and Padhi (2012) provide evidence on contagion of the subprime crisis of 2007, among other crises, using an asymmetric generalized dynamic conditional correlation model (AG–DCC) for both equity and bond markets of emerging economies around the world.4 This paper contributes to the existent literature in the following aspects. Firstly, we examine separately the contagion effects during different phases of the GFC. Other studies do not take into account different periods of the crisis. As recent studies provide evidence on the insulation of emerging markets from the US subprime crisis (e.g., Dooley & Hutchison, 2009), our empirical analysis allows us to test the decoupling–recoupling hypothesis, which supports that some markets show immunity during different phases of a crisis or even the entire crisis period. Secondly, we capture the time-varying DCCs from a multivariate AR(1)–FIAPARCH–DCC model, which goes beyond a simple analysis of correlation taking into account long memory behavior, speed of market information, asymmetries and leverage effects. Thirdly, we provide further evidence of contagion effects on BRICS, which their relative importance as an engine of new demand growth and spending power seems to shift more dramatically and quickly than expected. The results provide evidence on the decoupling hypothesis for most of the BRICSs' markets at the early stages of the crisis, while a contagion effect (recoupling) exists for almost all of them after the Lehmann Brothers collapse, implying the existence of a shift on investors' risk appetite. Moreover, conditional correlations between BRICS and USA are all positive and statistically significant from early 2009 onwards (post-crisis period), implying that the crisis accelerates the integration process of BRICS and their dependence with USA is larger in bullish markets. The structure of the paper is organized as follows. Section 2 presents the multivariate AR(1)–FIAPARCH–DCC model and the identification of the crisis period based on an economic and a statistical approach. Section 3 provides the data and a preliminary analysis. The empirical results and their interpretation are displayed and discussed in Section 4, while Section 5 reports the summary and concluding remarks.

The spread of the GFC from US to BRICSs' stock markets is being analyzed using a multivariate AR(1)–FIAPARCH (1,d,1)–DCC specification. A preliminary analysis shows that this model is appropriate to capture long memory behavior, speed of market information, asymmetries and leverage effects of the examined equity markets. The length and the phases of the crisis are identified based on all key international financial/economic events that represent the GFC and regimes of excess volatility for each emerging market. The statistical analysis of correlation coefficients during the several phases of the crisis supports a general pattern of decoupling for some of BRICSs' markets (Brazil, China and S. Africa) at the early stages of the GFC, and a recoupling for almost all markets after the failure of Lehman Brothers. These findings do not show a pattern of contagion for all markets that could be attributed to their common trade and financial characteristics. They also indicate the increasing co-movement among USA and BRICS during the post-crisis period (from early 2009 onwards), implying that dependence is larger in bullish than in bearish markets. This might indicate a low probability of simultaneous breakdown of markets. These results imply that investors should be cautious about simultaneously investing in markets that exhibit pure contagion, since a shift in investors' risk appetite is likely to disappear the portfolio benefits when are most wanted. From policy makers' perspective, this study provides important information about the directions for possible undertaking measures in order to protect emerging markets from contagion during future crises. They should carefully examine and uncover possible decoupling strategies that may insulate emerging markets from contagion. Specifically, when a decline in investors' appetite for risk occurred after a period of high risk appetite, markets will have a high tendency to react adversely to events that might not otherwise warrant major reaction. In these circumstances, it may be appropriate to provide funding expeditiously to stabilize sentiment and have lighter conditionality (Kumar & Persaud, 2001). Increasing liquidity quickly could substantially reduce the magnitude of a crisis and potential contagion effects. Finally, future research could empirically investigate the impact of different types of economic structure on the interrelationships among BRICS and developed financial markets, as well as the transmission of the crisis in their real economies by using country-specific fundamentals.