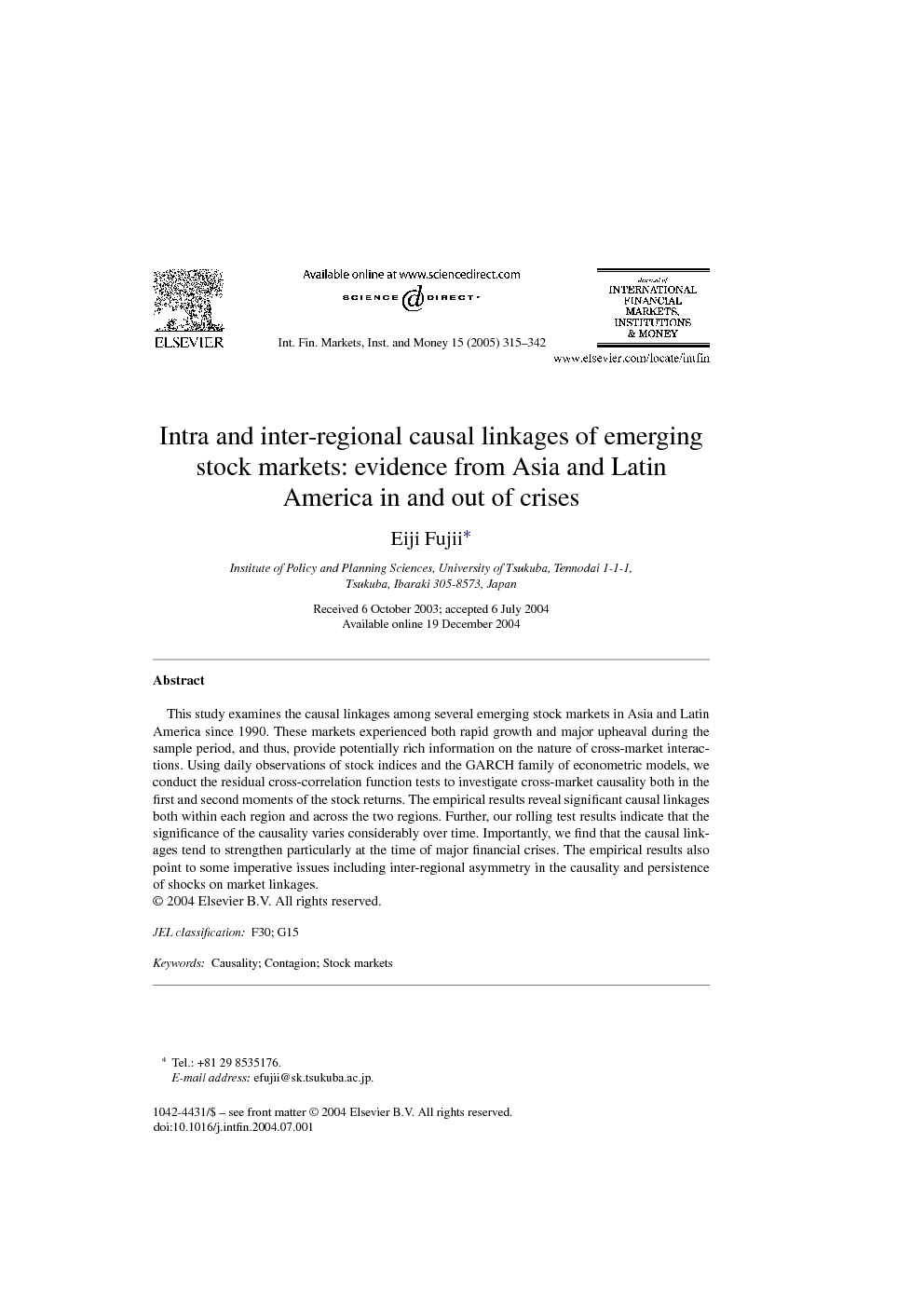 This study examines the causal linkages among several emerging stock markets in Asia and Latin America since 1990. These markets experienced both rapid growth and major upheaval during the sample period, and thus, provide potentially rich information on the nature of cross-market interactions. Using daily observations of stock indices and the GARCH family of econometric models, we conduct the residual cross-correlation function tests to investigate cross-market causality both in the first and second moments of the stock returns. The empirical results reveal significant causal linkages both within each region and across the two regions. Further, our rolling test results indicate that the significance of the causality varies considerably over time. Importantly, we find that the causal linkages tend to strengthen particularly at the time of major financial crises. The empirical results also point to some imperative issues including inter-regional asymmetry in the causality and persistence of shocks on market linkages.

A series of financial crises in the past decade have generated a heated policy debate over desirability of swift financial liberalization for emerging markets (Furman and Stiglitz, 1998 and Radelet and Sachs, 1998). Among the cornerstone issues is “contagion” of financial crises across countries. If the sequence of financial turmoil in numerous countries is a result of systematic deterioration of their own fundamentals, then it is primarily their domestic macroeconomic policy conducts, rather than the financial liberalization, that needs to be addressed. On the other hand, if the emerging economies are inherently vulnerable to negative effects of financial instability occurring elsewhere, then it may well be justified to actively tame some of the financial flow into and/or out of the markets. The crucial issue has motivated numerous recent studies (Baig and Goldfajn, 1999, Edwards and Susmel, 2001 and Forbes and Rigobon, 2002) to empirically examine whether or not the cross-country interactions of financial markets during crises periods are significantly different from those in stable times. Some studies (Baig and Goldfajn, 1999 and Calvo and Reinhart, 1996) find that financial market correlations across countries increase significantly during crises, rendering support to the view that crises are contagious. Forbes and Rigobon (2002), however, casts a serious doubt on the contagion hypothesis by demonstrating that the previous empirical evidence based on market correlations are prone to a bias resulting from neglecting heteroskedasticity in the financial time series. Since the accumulated evidence has yet to reach a definitive conclusion, gaining further insight into the issue is warranted. In this study, we investigate the causal linkages among the stock markets of several emerging economies in Asia and Latin America since 1990. These markets have experienced both rapid growth and major upheaval over the past decade, and thus, provide potentially rich information on the nature of the cross-market interactions in altering market environments.1 In particular, we are interested in finding out if inter-market relationships, both within and across the regions, vary significantly as the markets go into and out of financial crises. Using daily observations of stock indices of several Asian and Latin American markets and the generalized autoregressive conditional heteroskedasticity (GARCH) family of econometric models, this study conducts the residual cross-correlation function (CCF) tests (Cheung and Ng, 1996) to investigate cross-market causality both in the first and second moments of stock returns within and across the regions. By implementing the CCF tests with a rolling window, we illustrate how the significance of the inter-market causal linkages has evolved over the past decade as the markets experienced periods of stability and volatility. Our empirical exercise has several desirable features. First, by modeling the stock return dynamics as autoregressive (AR) processes with the GARCH feature, we explicitly account for conditional volatility present in the time series data. The CCF tests are conducted on the (squared) standardized residuals obtained from the estimated AR-GARCH models, and thus, the results are not distorted by heteroskedasticity present in the raw data. 2 Second, cross-correlations of the standardized residuals and their squares will be examined at various lags and leads to investigate synchronous and non-synchronous market interactions both in the first and second moments of stock returns. Testing for causality in variance, in addition to that in mean, provides extra information to illuminate how the markets interact in volatile environments. Also, the direction of causality and the lag structure offers valuable information for understanding the information flow between markets. Third, by investigating market linkages through a rolling window, we show how the inter-market relationships have evolved over time as the Asian and Latin American markets go in and out of financial crises. Previous studies ( Baig and Goldfajn, 1999 and Forbes and Rigobon, 2002) examine difference in market correlations between two particular samples that are pre-selected as stable and volatile periods, respectively. Inevitably, empirical results hinge crucially on the sample selection. Our rolling CCF tests, on the other hand, illustrate how the significance of inter-market relationships has varied through the entire 1990–2001 sample. Finally, by examining several markets from two geographically distant regions, we are able to investigate both intra- and inter-regional causal nexuses. Within each region, the economies share close real links, for instance, via trade flow. Inter-regionally, however, the direct linkages are much weaker.3 Hence, contrasting inter-market relationships within and across the regional boundaries can shed some light on the importance of real linkages for interactions across emerging financial markets. To anticipate the results, we find significant market interactions within each region as well as across the two regions. Further, the significance of the market linkages varies over time considerably. Importantly, the causal relationships are found to strengthen particularly at the time of major financial crises. The empirical results also point to some imperative issues such as inter-regional asymmetry in the causal relationships and persistence of shocks on market linkages. The remainder of this study is organized as follows. Section 2 provides a brief review of the preceding literature. Section 3 contains the data description and the results of preliminary data analysis. Section 4 describes the empirical methodology, including our modeling strategy for the stock return dynamics and the residual CCF tests. As an initial set of empirical evidence, Section 5 presents the results using data for the entire 1990–2001 sample. In Section 6, we implement the CCF tests with a rolling window to trace the evolution of the cross-market linkages over the 12-year-period. In view of the results, we discuss how the cross-market causal relationships have shifted in and out of financial crises. Section 7 provides concluding remarks.

One intriguing empirical observation over the past decades is that financial crises in emerging markets often occur in a clustered fashion in timing. A natural supposition is that there are significant cross-country casual interactions, or contagion, in the financial markets as they experience turbulence in a seemingly concurrent or successive fashion. Whether or not the supposition holds true has critical implications for the ongoing debate over the desirability of swift financial market liberalization in many emerging economies. To gain insight into the issue, it is instructive to investigate how shocks and volatility travel across emerging financial markets within a region as well as across a regional boundary. In this study, we examine the causal linkages among several emerging stock markets in Asia and Latin America using the daily observations of their stock indices over 1990–2001. After modeling the dynamics of the daily stock return using the GARCH techniques, we conduct the CCF tests for causality in the first and second moments at various lags and leads using the standardized residuals and their squares. The empirical results suggest that there are indeed considerable causal interactions across the emerging stock markets. To understand if and how the pattern of market interactions alters significantly as the markets go through volatile and stable periods, we also conduct the causality tests with a rolling window. It is evidenced that the significance of the causal linkages between markets varies substantially over the sample period. Importantly, there are considerable indications that the linkages are strengthened around the time of major financial crises such as the 1994–95 Mexican and the 1997–98 Asian crises. The tendency is conspicuous for the intra-Asia market relationships both in mean and variance, as well as the intra-Latin America market relationships in variance. The causality in mean within Latin America, on the other hand, seems to be permanently transformed once the markets experience the Mexican crises. Furthermore, as decisively demonstrated by causality in mean from Thailand to Latin America (Fig. 4A), the enhancement of market linkages under turmoil is not necessarily contained within regional boundaries where real economic links tend to be firm. In view of all the empirical evidence, we conclude that the causal interactions among emerging stock markets in Asia and Latin America under crises circumstances seem to differ from those in stable times. Within each region as well as across the two regions, the markets appear to become more interdependent on each other. As an additional note, our empirical results also underscore the complexity of inter-market relationships. Specifically, time-dependent market linkages may be established through mean and/or variance of stock returns, and the relationships can be asymmetric between regions. Also, shocks on market linkages can be temporary or highly persistent. These various possibilities should be taken into account when considering market contagion. Unfortunately, implementation of our empirical exercise also bears a cost. Due to the limitation of key macroeconomic data at a daily frequency, we are unable to control for the effects of movements in macroeconomic fundamentals. In this regard, while our empirical results effectively portray the changes in the pattern of cross-market causal interactions, they do not constitute direct evidence that the seemingly contagious market movements are generated by factors other than shifts in fundamentals. As a possible future extension, it would be useful to examine if other financial variables such as exchange rates and interest rates depict a similar picture.