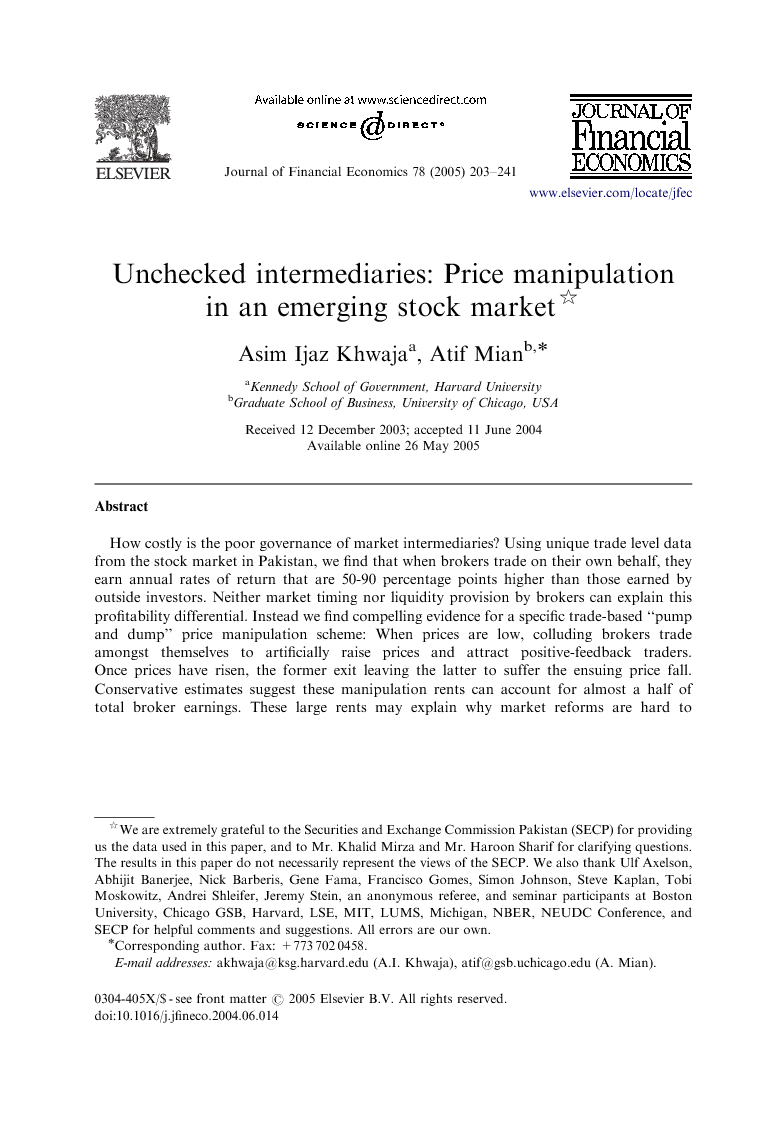 How costly is the poor governance of market intermediaries? Using unique trade level data from the stock market in Pakistan, we find that when brokers trade on their own behalf, they earn annual rates of return that are 50-90 percentage points higher than those earned by outside investors. Neither market timing nor liquidity provision by brokers can explain this profitability differential. Instead we find compelling evidence for a specific trade-based “pump and dump” price manipulation scheme: When prices are low, colluding brokers trade amongst themselves to artificially raise prices and attract positive-feedback traders. Once prices have risen, the former exit leaving the latter to suffer the ensuing price fall. Conservative estimates suggest these manipulation rents can account for almost a half of total broker earnings. These large rents may explain why market reforms are hard to implement and emerging equity markets often remain marginal with few outsiders investing and little capital raised.

This paper uncovers unusual trading patterns and systematic profitability differences arising from trades between brokers and outside investors in emerging markets. While market-timing and liquidity-based explanations could account for some of the results, we argue that the evidence is indicative of manipulation of stock prices by collusive brokers. How significant are these manipulation-based rents, particularly in relation to what brokers earn by trading honestly (by intermediating for outside investors)? While it is hard to come up with precise numbers, we can provide estimates by making assumptions about trading behavior and brokerage commissions. Specifically, we assume that a fraction PRIN of a broker's trades in a given stock are manipulative and a fraction 1-PRIN1-PRIN are intermediary trades. We can then arrive at estimates of earnings by using a 50% return on the manipulative trades (a conservative estimate of the PRINPRIN effect) and a 1% brokerage commission (the average commission rate in the KSE) on intermediary trades. The former gives us what the broker earns from manipulation in a given stock and the latter his earnings (total brokerage commission) from honest trading in the stock. 21 We can then compute a broker's total manipulation and honest trading earnings by summing the respective numbers across all the stocks he trades in. Doing so reveals a couple of findings. First, manipulation rents are a significant part of the overall market: 44% of total broker earnings in the market.22 Moreover, these rents are likely to be an underestimate. Second, examining the earnings from honest and manipulative activity for each broker reveals that most brokers are earning significant manipulation rents. Fig. 7 gives the distribution of the share broker's earn through manipulation and shows that most brokers are clustered around the single mode (40%). This in turn has implications for regulation because it implies that instead of focusing only on a few brokers, regulation must correct for the presence and extent of manipulation in general. Full-size image (18 K) Fig. 7. Manipulation rents as a percentage of total broker earnings. Total broker earnings are made up of manipulation rents computed using a 50% return on trading done by broker on their own behalf (our conservative estimate in the paper) and brokerage commissions computed using a 1% commission rate on the value of trading done by a broker on behalf of outsiders. Figure options The broader question then raised by our results is how important are the market inefficiencies, identified in this paper, from a country's financial development perspective? Our view is that, in terms of direct costs, the large transfer of wealth from outsiders to insider manipulators is likely to significantly discourage how much and how many outside investors choose to invest in the market. The presence of manipulators and naive traders imposes large participation costs for rational and sophisticated agents trying to either invest or raise capital in equity markets. Such participation costs form an important piece in solving the puzzle of financial underdevelopment. If manipulation becomes more difficult as the number of players and the size of the market increases, then there is a possibility of multiple equilibria: one with excessive manipulation and a small market size, and another with little or no manipulation and a large market size. Furthermore, the manipulation activity we show can be responsible for excessive volatility in the market and in turn impose additional participation costs. An important agenda for future research is to understand and show what additional mechanisms used by market intermediaries could increase the participation costs and lead to excessive volatility in these markets, as discussed by Kindleberger (1978) in his seminal work Manias, Panics, and Crashes. Such work leads to a better understanding of what reforms are successful in limiting the misgovernance of markets by intermediaries. Such reforms could include a greater presence of independent members (nonbrokers) in the exchange's board of directors; facilitating entry and competition amongst brokers, including the setting up of new exchanges; better systems of surveillance; tighter enforcement of existing and new regulation, such as stricter margin and capital adequacy; and information disclosure requirements that protect outside investors and prevent undesirable activities in the market. Our results also suggest that, to the extent that a significant part of the market turnover reflects such manipulative practices, increased market turnover is unlikely to either lead or even reflect overall growth in the economy. Thus, in trying to find positive correlations between market turnover and growth using cross-country data (e.g. Levine and Zervos, 1998), emerging economies such as Pakistan (and Fig. 1 suggests there could be several others) appear as outliers. However, we should be careful in drawing inferences. Our results do not imply that financial markets have little to contribute to growth but that observing an active market should not automatically lead one to conclude that such a role is being played. Identifying inefficiencies such as market manipulation and the resulting significant rents accruing to individuals can help begin to answer the more fundamental political economy question of why countries fail to adopt and implement good governance and other laws needed to strengthen equity markets. Even if it is obvious what reforms need to be taken to improve efficiency, because such reforms are likely to limit manipulation, they will be resisted by the conspiring brokers. This will be the case when, in the post-reform improved equilibrium, one cannot guarantee these brokers a large enough share of the pie, i.e., the Coase theorem no longer holds. This seems to be the case in Pakistan, where efforts by the SECP to initiate reforms have met with strong political opposition by lobbies working on the brokers’ behalf. To conclude, because the rent-seeking activities identified in this paper are likely to occur in newer and shallower emerging markets, they can in turn be responsible for limiting the depth and size of such markets leaving them in infancy traps in the absence of a positive reform. The concern is that equity markets, whose job is to facilitate real economic activity, could remain as phantom markets that serve little economic purpose.