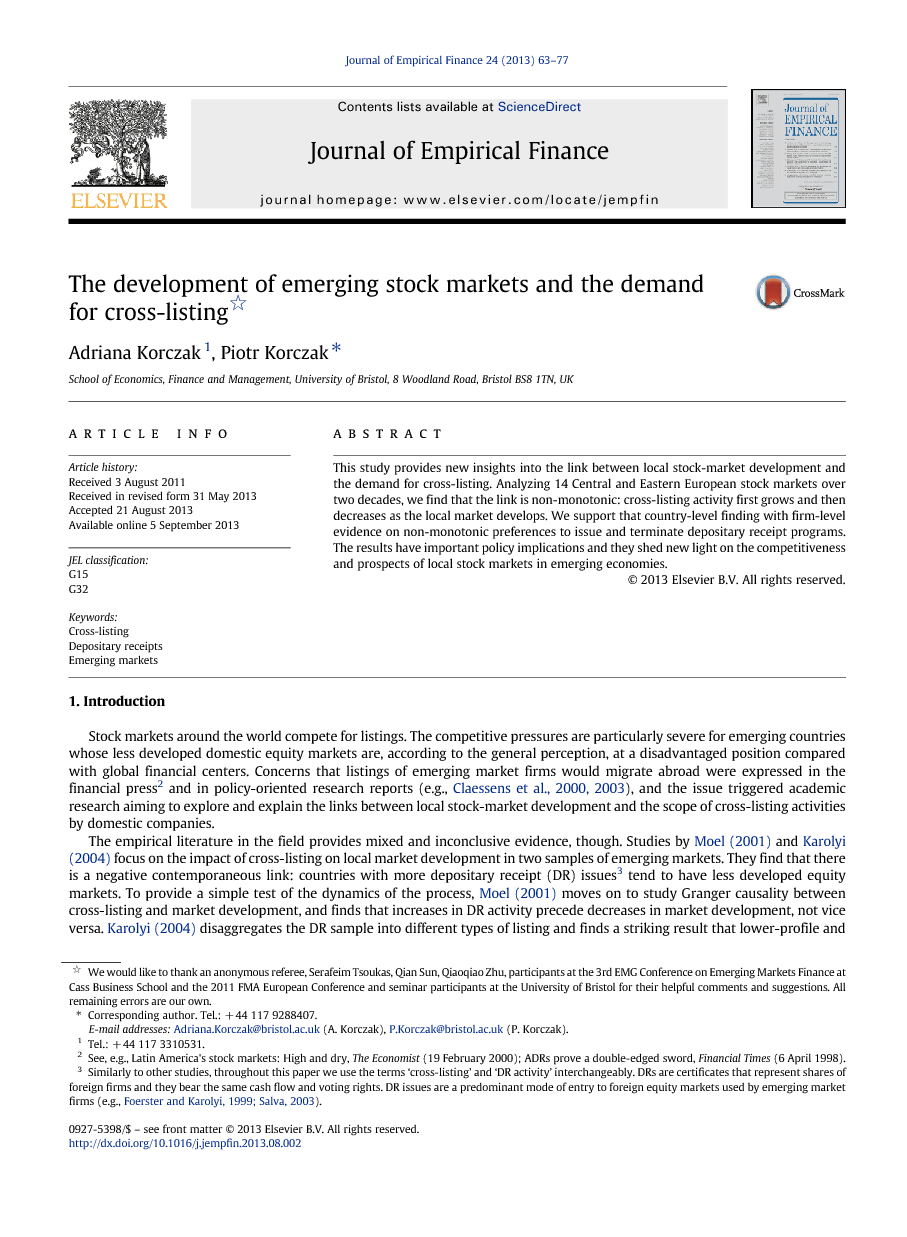 This study provides new insights into the link between local stock-market development and the demand for cross-listing. Analyzing 14 Central and Eastern European stock markets over two decades, we find that the link is non-monotonic: cross-listing activity first grows and then decreases as the local market develops. We support that country-level finding with firm-level evidence on non-monotonic preferences to issue and terminate depositary receipt programs. The results have important policy implications and they shed new light on the competitiveness and prospects of local stock markets in emerging economies.

This paper aims to shed new light on the link between local stock-market development and cross-listing activity by domestic firms. The empirical evidence to date is mixed. There is some support for a negative link indicating that companies list abroad in response to poor market development at home (Karolyi, 2004), as well as for a positive link interpreted from the perspective of international investors who are more willing to provide financing to firms from better home-country environments (Claessens et al., 2006). We argue that the relation is non-monotonic and we provide strong evidence to support this. Using data for 14 CEE countries over two decades we show that cross-listing by local companies first increases and then decreases as the local market develops. The result indicates that the demand for cross-listing is driven by domestic stock-market underdevelopment but the attractiveness of foreign listings diminishes when the local market reaches a certain development threshold. In additional tests we provide some evidence regarding how firm-level behavior contributes to country-level outcomes. We find that country-level results are to some extent driven by non-monotonic preferences to issue DRs in privatization offerings, and also by non-monotonic propensity to terminate DR programs across different stages of market development. Our results have important policy implications. Concerns are raised that local stock markets in emerging countries are under pressure from large financial centers and will have difficulties seeing their local firms move abroad in search for capital and liquidity. Our results indicate that cross-listing is not a one-way trend. To increase the relative competitiveness of local stock markets in relation to global financial centers, the efforts of governments and regulators need to be focused on strengthening the local market beyond the point at which domestic companies will see it as a viable alternative to venturing abroad. It is well-documented in the literature (e.g., Claessens et al., 2006, La Porta et al., 1997, Levine and Zervos, 1998 and Rajan and Zingales, 2003) that this can be achieved through sound macroeconomic policies, openness, liberalization, strong legal rules and law enforcement.