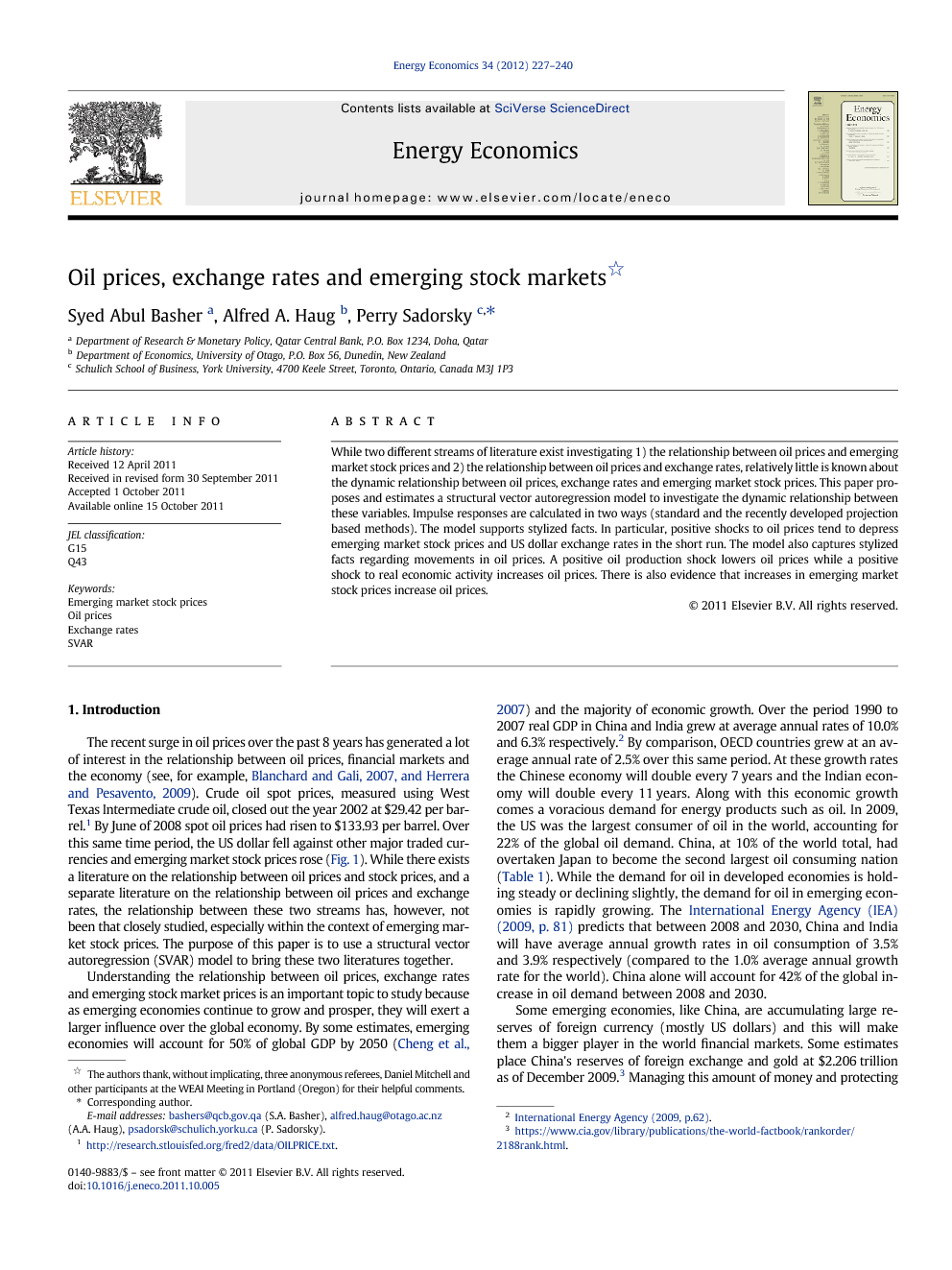 Recognizing the importance of the relationship between stock prices and oil prices and the relationship between oil prices and exchange rates, this paper combines these two streams of literature, discussed in Section 2 of our paper, together into one empirical structural vector autoregression model. This differentiates our paper from prior studies. In doing so, it is possible to gain a more complete understanding of the dynamic relationship between oil prices, emerging market stock prices and exchange rates. This is important because emerging economies have, over the past ten years, been accounting for a larger proportion of global GDP and this trend is expected to continue. Emerging economies are among the fastest growing economies (with GDP growth rates much higher than the growth rates observed in developed economies) and this combination of size and growth is likely to influence the dynamics between oil prices, emerging market stock prices and exchange rates. The short-term dynamics between oil prices, emerging market stock prices and exchange rates are analyzed using two sets of impulse response functions (standard and local projection based). In most cases the projection based IRFs provide similar results as the standard IRFs. Where the two approaches differ, the projection based approach tends to provide impulse responses that are more likely to adequately capture the cyclical response of a variable to an unexpected structural shock. Both approaches for example report that stock prices respond negatively to a positive oil price shock, and that oil prices respond positively to a positive emerging market shock. However, the first effect is only statistically significant for the projection based impulses for the first 2–3 months after the impact. The second effect is barely statistically significant in the period 2–8 months after the impact for standard impulses and is statistically significant in that period (4–13 months) for projection based responses with one standard error confidence bands. These results indicate that while increases in oil prices depress stock prices (a result widely supported by the literature documenting the effects of oil prices on stock markets, see for example Basher and Sadorsky (2006) and the references they cite) it is also the case that increases in emerging market stock market prices lead to an increase in oil prices (a result which to our knowledge has not been previously explored). This latter result makes sense within the context of global oil markets and global economic activity. Oil consumption in most developed economies is flat or in decline and as a result emerging market economic growth (as proxied by emerging market stock prices) is likely to be an important source of demand side pricing pressure in the oil market. The results in this paper offer support for the hypothesis that exchange rates respond to movements in oil prices and that most of the dynamic interaction takes place in the short run. In particular, a positive oil price shock leads to an immediate drop in the trade-weighted exchange rate. This result has a statistically significant impact for about 5–6 months. These results are consistent with Krugman's (1983b) model of speculation. Rising oil prices will generate a current account surplus for oil exporters and current account deficits for oil importers. The long-run expectation is that oil importers will experience a depreciation in their currencies because of the adverse terms of trade effect and this expectation of future depreciation is enough to produce a drop in the dollar in the short-run even if petro dollars are recycled. In comparison, no support is found for the hypothesis that oil prices respond to shocks to exchange rates. The results in this paper show that oil prices respond negatively to an unexpected increase in oil supply and oil prices respond positively to an unexpected increase in demand. These results are consistent with the predictions from a demand and supply model for the oil market. Oil prices respond positively to a positive shock to emerging stock markets. These results are important in establishing, that in addition to global supply and demand conditions for oil, oil prices also respond to emerging market equity markets. The results in this paper have a number of policy implications. As expected, oil prices respond to global oil production (supply) and real global economic activity (demand). Rapidly rising stock prices in emerging economies can also put pressure on oil prices to rise. While it has typically been the case that macroeconomic policy in developed economies, like the G7, was seen as an important factor affecting the global economy, it now must be recognized that monetary and fiscal policy in large emerging economies (like China and India) can affect their own economic growth prospects as well as global financial markets. As the results in this paper have shown, oil prices respond not just to economic fundamentals like oil supply and real economic activity but also to movements in emerging stock prices. Stock markets are often seen as leading economic indicators. Rapidly rising stock prices in emerging markets signal the expectation of higher economic growth ahead. If emerging market stock prices get trapped in a bubble, however, oil prices will overshoot in relation to economic fundamentals. This means that consumers in developed economies could end up paying more for oil and oil related products even if their own domestic economic growth remains sluggish and future realized economic growth in emerging economies is less than what the financial markets expected. Finally, the framework presented in this paper could be used to analyze the oil, stock market and exchange rate relationship separately for major emerging countries, such as BRIC (Brazil, Russia, India and China) and/or major oil-exporting (e.g. Indonesia, Mexico and Russia) countries. Such country-specific study would allow for a more in-depth understanding of the effect of oil price shocks on equity prices in these countries. We leave this to future research.