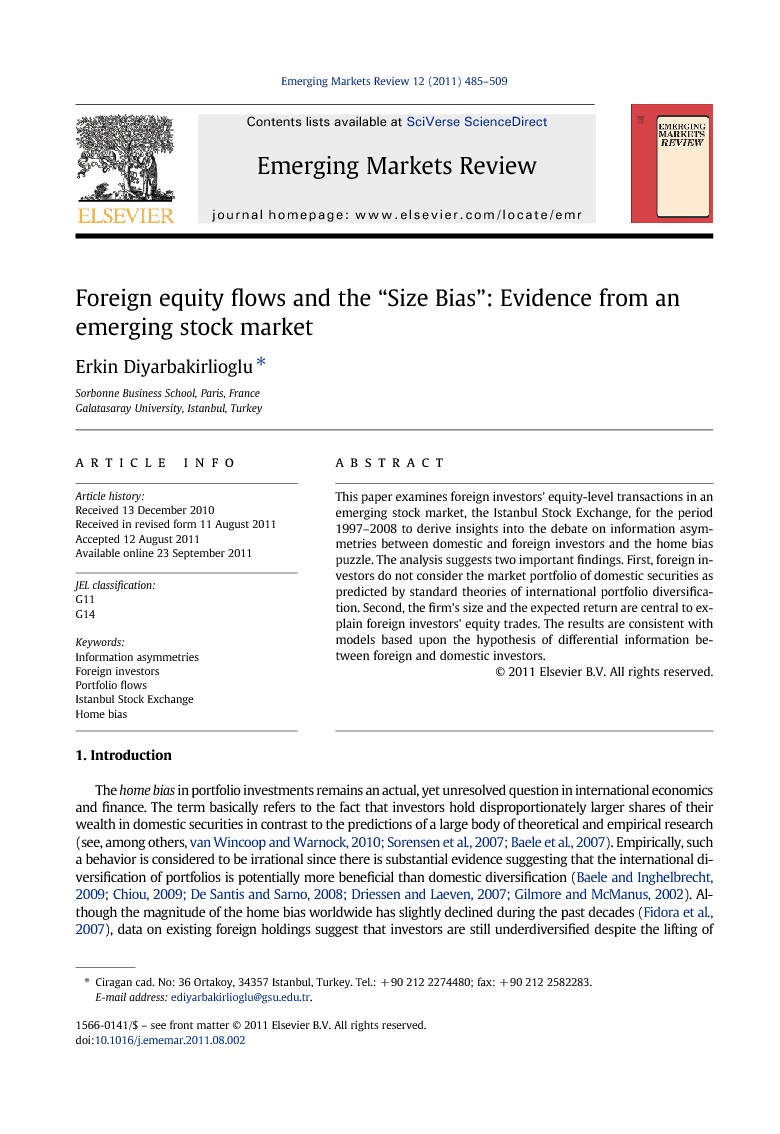 This paper examines foreign investors' equity-level transactions in an emerging stock market, the Istanbul Stock Exchange, for the period 1997–2008 to derive insights into the debate on information asymmetries between domestic and foreign investors and the home bias puzzle. The analysis suggests two important findings. First, foreign investors do not consider the market portfolio of domestic securities as predicted by standard theories of international portfolio diversification. Second, the firm's size and the expected return are central to explain foreign investors' equity trades. The results are consistent with models based upon the hypothesis of differential information between foreign and domestic investors.

This paper explores a unique dataset on foreign investors' firm-level transactions in an emerging stock market, the Istanbul Stock Exchange, using a sample of 84 stocks for the period 1997–2008. The analysis provides useful insights into the determinants of cross-border portfolio flows and the issue of information asymmetry between local and non-local investors. The results can be summarized as follows. First, foreign investors' transactions are concentrated across large capitalization stocks that consist mostly of financial firms, thereby discarding the well-known result that investors should invest in the market-portfolio of securities as proposed by standard theories of international portfolio diversification. Second, regressions suggest that the firm's market capitalization and the expected return on the corresponding stock are two important factors in explaining net equity flows by non-residents. The significance of size and return variables is robust to different specifications and subsets of the data (e.g. financial vs. industrial stocks), as well as to additional controls taking into account other firm characteristics such as leverage, valuation, profitability, dividends and liquidity. Third, foreign investors are likely to be trend-followers such that a high significant contemporaneous correlation exists between foreign investors' net purchases of local stocks and the returns on the host market. Putting together, evidence presented here provides empirical support to the ongoing debate as to whether foreign investors are at an information disadvantage compared to domestic investors. First, the significance of the market capitalization as a key covariate of the net equity inflows into the ISE confirms the Merton's hypothesis (Merton, 1987), where size substitutes for the extent to which investors feel themselves familiar with the firm of interest. Second, the contemporaneous correlation between the returns on the host market and foreign investors' trading patterns in local stocks is typically consistent with the empirical predictions of models assuming differential information between domestic and foreign investors (Brennan et al., 2005 and Brennan and Cao, 1997). As such, the finding of information asymmetries between locals and non-locals also shed light into the debate on the home bias puzzle since overweighting one's home market can be justified on the basis of information asymmetries from which investors suffer when they consider investing abroad. One possible direction for future research is to control the results by using data on the holdings of foreign investors, since ownership data is likely to provide further, and, to some extent, more precise information on the investment behavior of foreign investors in local stocks. Second, while the results presented here can be considered as a convincing case that foreign investors are informationally less advantageous in Turkish stocks than are domestic investors, whether the latter group materializes or not this informational advantage remains an unanswered issue, mainly due to lack of data. Analyzing the respective performances of foreign versus local investors within an emerging stock market that had not been carefully examined so far, can also contribute to the ongoing debate on the determinants of international portfolio flows and the lack of global portfolio diversification.