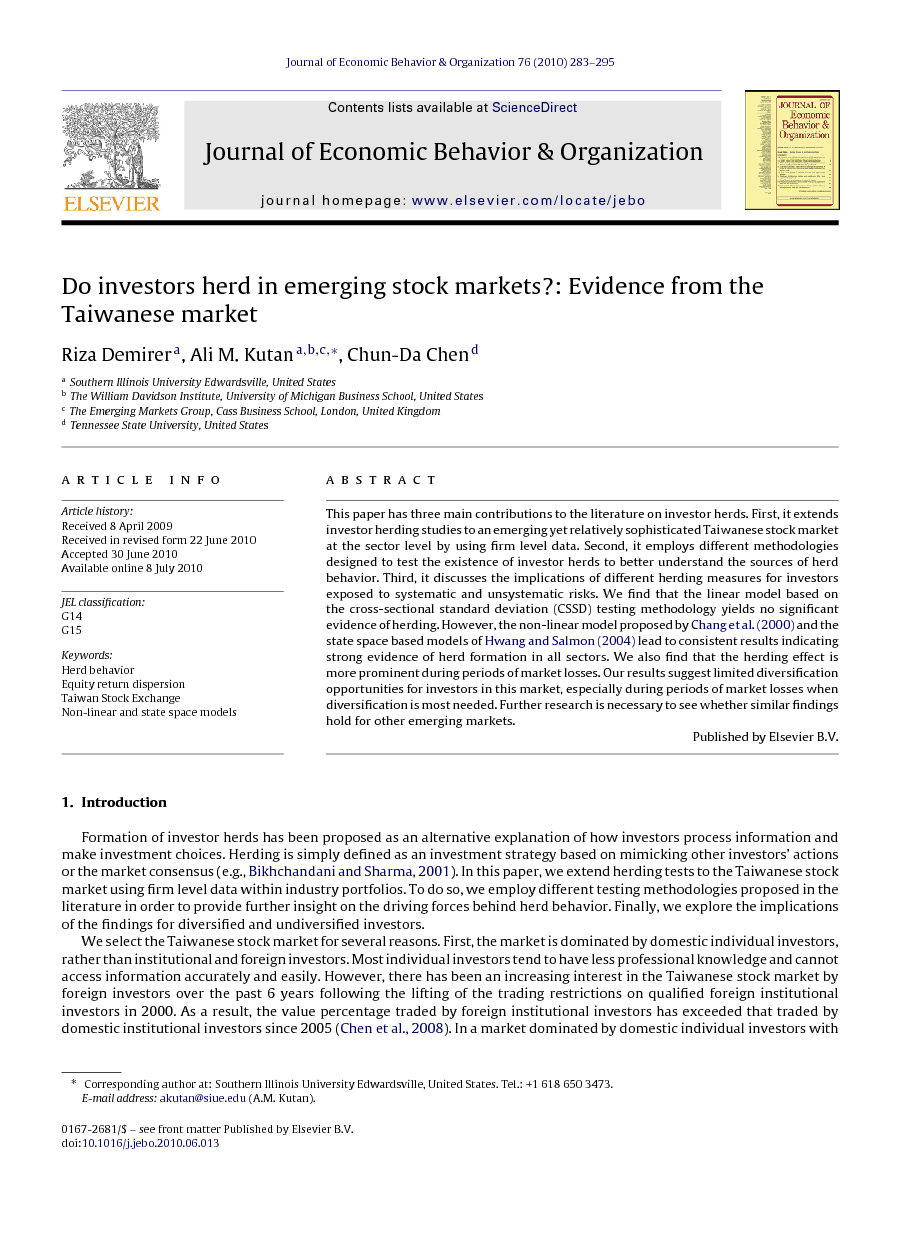 This paper has three main contributions to the literature on investor herds. First, it extends investor herding studies to an emerging yet relatively sophisticated Taiwanese stock market at the sector level by using firm level data. Second, it employs different methodologies designed to test the existence of investor herds to better understand the sources of herd behavior. Third, it discusses the implications of different herding measures for investors exposed to systematic and unsystematic risks. We find that the linear model based on the cross-sectional standard deviation (CSSD) testing methodology yields no significant evidence of herding. However, the non-linear model proposed by Chang et al. (2000) and the state space based models of Hwang and Salmon (2004) lead to consistent results indicating strong evidence of herd formation in all sectors. We also find that the herding effect is more prominent during periods of market losses. Our results suggest limited diversification opportunities for investors in this market, especially during periods of market losses when diversification is most needed. Further research is necessary to see whether similar findings hold for other emerging markets.

There are scant studies on herding behavior in Taiwan, and while they produce conflicting inferences, they do not provide evidence at the sector level. In this paper, we extend tests of investor herds to the Taiwan Stock Exchange, using firm level data on 689 firms classified into 18 different sectors. Also, we employ different herding models simultaneously using a large data set to compare and contrast different herding measures under different approaches to better understand the sources of herd behavior and discuss their implications for investors exposed to systematic and unsystematic risks. The linear model proposed by Christie and Huang (1995) provides no evidence of investor herds, except for the Electronics sector. However, as explained earlier, this methodology might lead to incorrect inferences as it fails to take into account the co-movement between individual asset returns and the aggregate market return. Furthermore, we find that the assumption of linearity between return dispersions and the market return in this methodology is rejected, and for this reason, we rely more on the findings from the non-linear model proposed by Chang et al. (2000). The results from the non-linear model indicate significant non-linear effects and provide support for herding in all sectors analyzed. Our tests of factor sensitivities using the state space-based models proposed in Hwang and Salmon (2004) further support the results of the non-linear model, indicating robust evidence for the formation of investor herds in Taiwan across all sectors. For further research, it would be interesting to examine herd behavior across industries along the lines of Choi and Sias (2009). Our results, which are based on dispersions of returns and factor sensitivities, should be interpreted cautiously, however, as there are other tests of investor herds. It would be interesting to compare our findings with those from different methodologies including tests that employ trading data.