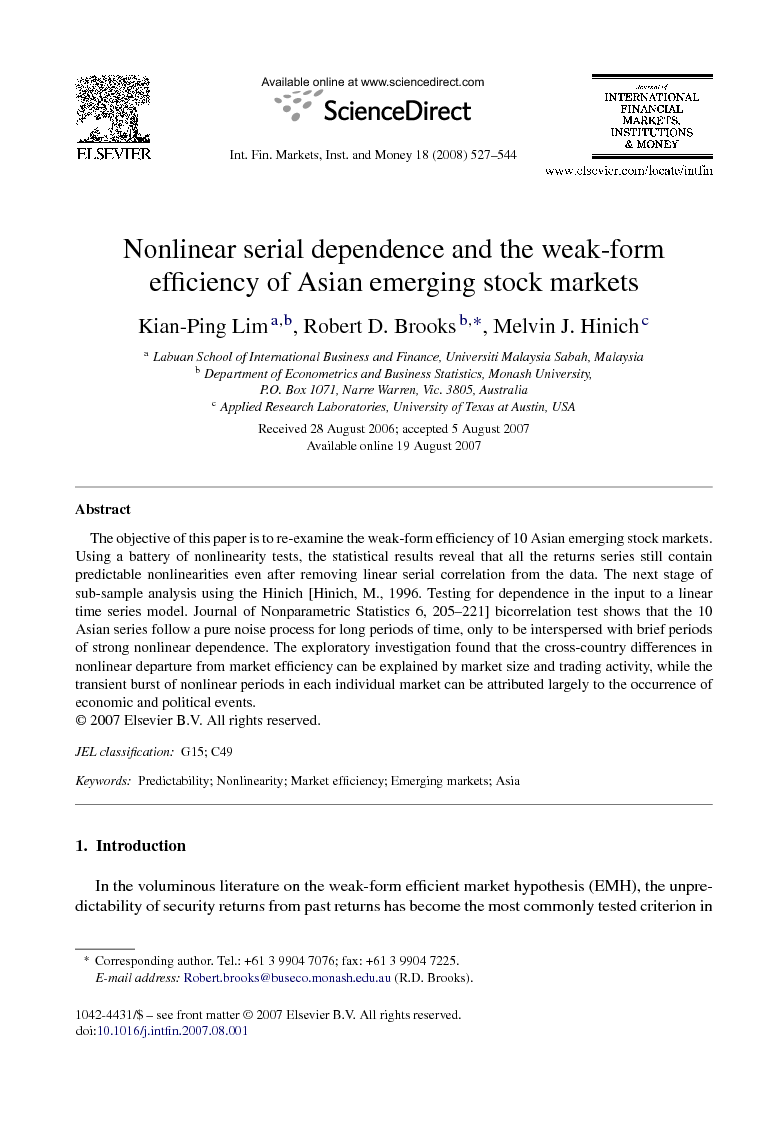 The objective of this paper is to re-examine the weak-form efficiency of 10 Asian emerging stock markets. Using a battery of nonlinearity tests, the statistical results reveal that all the returns series still contain predictable nonlinearities even after removing linear serial correlation from the data. The next stage of sub-sample analysis using the Hinich [Hinich, M., 1996. Testing for dependence in the input to a linear time series model. Journal of Nonparametric Statistics 6, 205–221] bicorrelation test shows that the 10 Asian series follow a pure noise process for long periods of time, only to be interspersed with brief periods of strong nonlinear dependence. The exploratory investigation found that the cross-country differences in nonlinear departure from market efficiency can be explained by market size and trading activity, while the transient burst of nonlinear periods in each individual market can be attributed largely to the occurrence of economic and political events.

In the voluminous literature on the weak-form efficient market hypothesis (EMH), the unpredictability of security returns from past returns has become the most commonly tested criterion in empirical studies.1 However, these short-horizons return predictability studies (commonly known as conventional efficiency studies) have been widely criticized for their focus on linear correlations of price changes. First of all, it is well established in the literature that thin trading would induce spurious autocorrelation in stock returns that is not genuine predictability, but rather a statistical illusion. Another potential source of bias is the imposition of price limits by stock exchanges. Though a number of studies have proposed some adjustment procedures, there is always a concern that the effects of these trading frictions would be underestimated. Since one can never be sure on the degree of these spurious autocorrelations, Hong and Lee (2005) argued that an alternative approach would be to remove all linear serial correlation from the data and determine whether stock returns still contain predictable nonlinearities. The second criticism launched against the conventional efficiency studies is that a white noise process does not necessarily imply efficiency as returns series can be linearly uncorrelated and at the same time nonlinearly dependent. This was highlighted 24 years ago by Granger (1983) in his appropriately titled “Forecasting white noise”, in which the author demonstrated that one could never be sure that a time series with zero autocorrelation is not forecastable. The same decade also witnessed the development of some nonlinear tools that led to subsequent uncovering of hidden nonlinear serial dependency structures in earlier observed random stock market data (see Hinich and Patterson, 1985 and Hsieh, 1991). This piece of evidence suggests the potential of predictability, and prompted researchers to re-examine the weak-form market efficiency using statistical tests that are capable of detecting nonlinear patterns in financial time series (for some recent studies, see Panagiotidis, 2005 and Saadi et al., 2006). The present paper straddles different strands of studies in the huge return predictability literature in three significant ways. Firstly, this study applies a battery of nonlinearity tests outlined in Patterson and Ashley (2000) to a broader set of emerging Asian stock markets in order to determine whether or not nonlinearity exists in the full sample of the returns series. Secondly, conventional efficiency studies commonly assume market efficiency is a static characteristic that remains unchanged over different stages of market development. However, the statistical findings of inefficiency in the full sample could have masked those periods when market is indeed efficient and vice versa. Motivated by this concern, a number of recent papers have shifted from the traditional focus of absolute market efficiency to tracking the changing degree of efficiency over time in emerging stock markets (see, for example, Rockinger and Urga, 2000 and Cajueiro and Tabak, 2006). Using the autocorrelation coefficient (short-term linear dependence) or Hurst exponent (long-term linear dependence) as indicators of market efficiency, the time-varying framework permits the above studies to identify when and speculate why market inefficiency occurs in a particular stock market.2 Following this group of emerging studies, the subsequent analysis further examines whether the detected nonlinear dependency structures in the emerging Asian returns series, if any, are localized in time (see Ammermann and Patterson, 2003). The research framework employed was originally proposed by Hinich and Patterson (1995), in which the full sample period is divided into equal-length non-overlapped moving time windows, and the Hinich (1996) portmanteau bicorrelation test statistic is then computed for detecting nonlinear serial dependence in each window. Thirdly, the above sub-sample analysis not only enables one to gauge the changing degree of market efficiency over time, but also provides a useful approach to assess the relative efficiency of the Asian stock markets by comparing the total number of windows that exhibit nonlinear dependence in each market. This flexible framework also permits us to explore a number of possible factors that might account for the cross-country differences in the level of market inefficiency and the transient burst of nonlinear dependence in each market.3 It is worth highlighting that the study by Lagoarde-Segot and Lucey (in press) also measured the relative efficiency for seven emerging Middle-Eastern North African (MENA) stock markets and related these cross-country variations to the theoretical underpinnings of market efficiency. However, their aggregate efficiency index based on the results of random walk tests and technical trading rules focuses on the linear departure from market efficiency. On the other hand, though Lim et al. (in press) employed the bicorrelation test for detecting nonlinear predictability in six of our sampled Asian stock markets, their analysis examines within-country efficiency and the impact of the 1997 Asian financial crisis by dividing the sample into sub-periods of pre-crisis, crisis and post-crisis. The plan of this paper is as follows. Section 2 discusses the methodology proposed by Hinich and Patterson (1995). Following that, Sections 3 and 4 provide a description of the data and discussion on the empirical results, respectively. Concluding remarks are given at the end of the paper.

Motivated by the possible existence of nonlinear serial dependence in financial time series and the concern that statistical dependence is very much localized in time, the present study re-examines the weak-form efficiency of 10 Asian emerging stock markets. Using a battery of nonlinearity tests, the statistical results reveal that all the returns series still contain predictable nonlinearity even after removing linear serial correlation from the data. The next stage of analysis splits the whole sample into a set of 73 equal-length non-overlapped sub-samples of length 50 observations. The application of the Hinich (1996) bicorrelation test shows that the 10 Asian returns series follow a pure noise process for long periods of time, only to be interspersed with brief periods of strong nonlinear dependence, suggesting that these markets are weak-form efficient most but not all the time. The exploratory investigation found that the cross-country differences in market inefficiency, as proxied by the total number of significant H windows, can be explained by market size and trading activity, but not market liquidity and the legal environment of the country. On the other hand, the transient burst of nonlinear periods in each individual market can be attributed largely to the occurrence of economic and political events, rather than the states of the market. The final analysis found that it is possible to predict the recurring periods of nonlinearity using a simple linear model only for the Sri Lankan returns series. As for the remaining nine markets, the scope of model search has to be expanded to the more complicated nonlinear time series models, which is an avenue for future research.