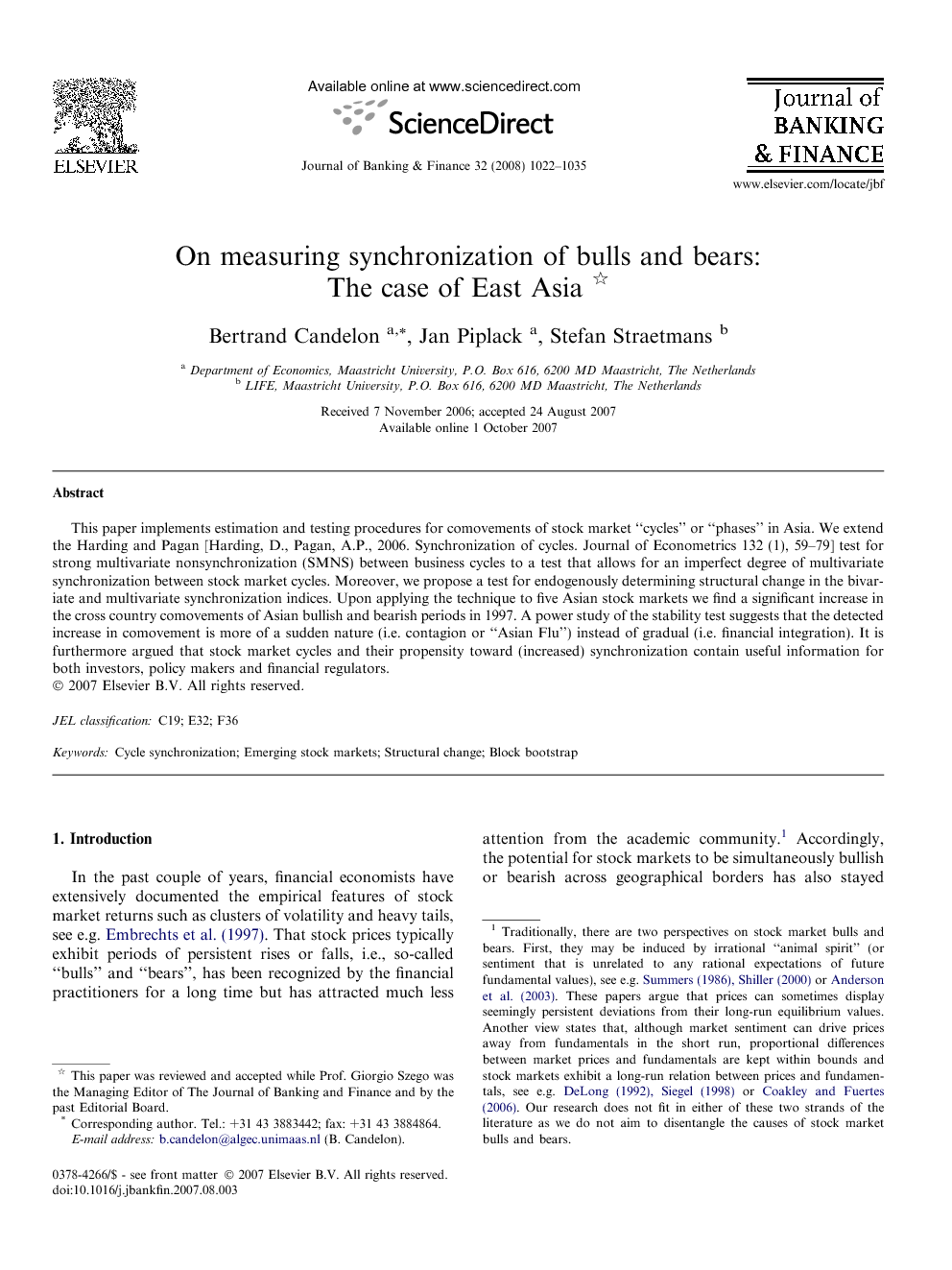 This paper implements estimation and testing procedures for comovements of stock market “cycles” or “phases” in Asia. We extend the Harding and Pagan [Harding, D., Pagan, A.P., 2006. Synchronization of cycles. Journal of Econometrics 132 (1), 59–79] test for strong multivariate nonsynchronization (SMNS) between business cycles to a test that allows for an imperfect degree of multivariate synchronization between stock market cycles. Moreover, we propose a test for endogenously determining structural change in the bivariate and multivariate synchronization indices. Upon applying the technique to five Asian stock markets we find a significant increase in the cross country comovements of Asian bullish and bearish periods in 1997. A power study of the stability test suggests that the detected increase in comovement is more of a sudden nature (i.e. contagion or “Asian Flu”) instead of gradual (i.e. financial integration). It is furthermore argued that stock market cycles and their propensity toward (increased) synchronization contain useful information for both investors, policy makers and financial regulators.

In the past couple of years, financial economists have extensively documented the empirical features of stock market returns such as clusters of volatility and heavy tails, see e.g. Embrechts et al. (1997). That stock prices typically exhibit periods of persistent rises or falls, i.e., so-called “bulls” and “bears”, has been recognized by the financial practitioners for a long time but has attracted much less attention from the academic community.1 Accordingly, the potential for stock markets to be simultaneously bullish or bearish across geographical borders has also stayed underexposed. The main objective of this paper will therefore be to provide a framework for measuring synchronization between stock market cycles and examine how it has evolved over time.2 Measuring stock market cycles and their cross border synchronization is of potential interest for both investors and policy makers. First, it is common sense that investors rebalance their portfolios by purchasing “cheap” stocks during bearish periods and selling “expensive” stocks when stock markets are bullish. The question arises, however, how to optimally time this portfolio rebalancing. Technical analysts typically time their buying and selling decisions by means of graphs. A more thorough statistical analysis of bulls and bears can help investors to further improve the timing of their investment decisions. The above discussion suggests that the duration of a stock cycle constitutes the natural time horizon for a “single-cycle” or “short-term” investor (or, alternatively, constitutes the natural time horizon for portfolio rebalancing in case of a “multi-cycle” or “long-term” investor). Thus, in order to assess the potential for risk diversification across stock market cycles, it seems natural to consider correlations over the duration of a typical stock market cycle and not on, say, a daily or monthly basis. The latter correlation measures might offer a misleading view on the potential for risk diversification if investors base their rebalancing decisions on stock market cycles. Also, persistent swings in stock market prices and the potentially destabilizing effects on the real economy raise the issue of how monetary authorities should respond. Indeed, bullish stock markets can induce large amounts of loan collateral – especially in less developed banking systems with poor regulatory frameworks – which then increase demand and goods price inflation. Moreover, when the stock market bulls turn into bears, this can result in widespread liquidity problems and a “credit crunch” in the financial system. Thus, monitoring the impact of stock market swings is also of potential interest to regulatory bodies caring about systemic risk and overall financial stability. Finally, if stock cycles have become more synchronized over time, the potential for financial system instability to spill over to other countries has also increased which suggests that a coordinated effort of policymakers and regulatory bodies is necessary. This paper makes several contributions to the stock market bulls and bears cum synchronization literature.3 More specifically, we extend the generalized method of moments (GMM) approach to measuring business cycle synchronization due to Harding and Pagan (2006) toward estimating and testing for (bivariate, multivariate) cyclical stock market synchronization. First, we allow for a value of the “common” synchronization index between −1 and 1, whereas Harding and Pagan only consider tests for the benchmark cases of perfect synchronization or nonsynchronization. Second, the estimation and testing procedure for multivariate synchronization is complemented with an endogenous stability test for detecting time variation in cyclical stock market synchronization. Third, our stability testing procedure can be seen as extending a scant preceding literature on structural change in cyclical stock market synchronization, see e.g. Edwards et al. (2003). The latter papers tried to investigate the stability of bivariate concordance indices by means of rolling regressions. Emerging markets are the more obvious candidates for detecting changes in cyclical stock market synchronization due to the rapid transformation of their financial systems and the recurrent financial crises, see e.g. Bekaert and Harvey (2000). We therefore use Asian stock market data in our empirical application. Furthermore, Monte Carlo simulation reveals that the stability test is able to detect contagion-like processes but not gradual changes. In that sense, our paper complements a recent literature on Asian contagion identification, see e.g. Forbes and Rigobon (2002) or Dungey et al. (2006). The remaining sections are organized as follows. Section 2 discusses the statistical estimation and testing methodology that will be implemented. Section 3 evaluates the small sample properties of the stability test (size and power) and proposes a bootstrap method for determining the size-corrected small sample critical values. Empirical estimation and testing results are reported in Section 4. Concluding remarks are contained in Section 5.

In this paper we proposed a generalized method of moments (GMM) framework to measure the degree of synchronization between stock market “bulls” and “bears”. We argued that an assessment of cycle duration and cycle comovement is potentially relevant for investors that base their investment decisions on the turning points of the stock market cycle. Moreover, policy makers and regulators might be interested to know the magnitude of stock market synchronization and whether it changed over time because of the potentially destabilizing effects for stock market bulls and bears on the real economy. Prior to calculating a measure of cyclical synchronization, we classified stock prices into “bull” and “bear” periods using the Bry and Boschan (1971) dating algorithm. We subsequently extended the Harding and Pagan (2006) framework in several directions. First, we allowed for a value of the common synchronization index between −1 and 1, whereas Harding and Pagan (2006) only tested against the benchmark cases of complete perfect synchronization or nonsynchronization (so, they did not really estimate a common synchronization index but restricted it to either 0, −1 or +1 prior to performing the test for a common cycle). However, in practice, business cycles as well as financial cycles are neither perfectly synchronized nor completely independent which implies that our testing framework is closer to reality than Harding and Pagan’s. Moreover, our approach also produces an estimate of the multivariate synchronization index ρ0 (−1 < ρ0 < 1). Second, we proposed an endogenous stability testing procedure for detecting structural change in the cyclical stock market synchronization index ρ0. Before putting the test to work in an empirical application, we performed a Monte Carlo experiment to evaluate the (small sample) size and power properties of the novel testing procedure. We found that the stability test suffers from massive overrejection when one uses asymptotic critical values and when the number of stock markets considered grows large. However, a bootstrap of the small sample distribution can remedy this problem fairly easily. In the power study, we made use of the small sample critical values to obtain size-adjusted power values. We found that the stability test is able to detect breaks reasonably well provided that the changes in synchronization occur suddenly and are relatively large in magnitude. Indeed, the power deteriorates surprisingly quickly upon lowering the adjustment speed or decreasing the change in the synchronization index. In other words, the stability test seems unable to pick up gradual structural breaks in synchronization which means that a financial integration interpretation for breaks is likely to be wrong in our framework. It is then tempting to interpret the breaks as evidence for financial contagion. However, one should be cautious with that break interpretation because the stability test is unable to distinguish permanent shocks from transitory shocks and contagion is by defining a transitory phenomenon. Changes in the synchronization of stock market cycles are probably more likely to occur across emerging markets than across developed markets due to financial liberalization and recurrent financial turmoil. We therefore selected a set of Asian stock markets for our empirical application. Upon applying the stability test, we detected an increase in synchronization, mainly after the Asian crisis, that is both economically and statistically significant. Upon applying the test for multivariate synchronization on the subsamples defined by the breaks, the pairwise (bivariate) synchronization indices seem to converge even more toward each other after the break. Moreover, we were unable to find breaks for a control group of developed countries which seems to confirm that forces like financial liberalization, institutional reform and market turbulence like the Asian crisis – that have been less prominent in developed markets – might be responsible for the increased synchronization. The observed rise in Asian stock market synchronization implies that there is less space for diversifying risk after the Asian crisis (at least for investors that solely invest in the considered Asian markets and whose portfolio rebalancing is dictated by the turning points of the stock market cycle). If the rise in stock market synchronization has a lasting character, regulatory bodies probably need to change their supervisory framework in order to preserve banking system stability in the Asian financial system. On the other hand, if the stronger comovements between bulls and bears is a purely transitory (and possibly contagious) phenomenon, policy makers cannot do more than (i) preventing these spillovers by reducing the potential for the build up of boom–bust cycles in their domestic economies and (ii) reducing the financial and real effects of the transitory shock if bulls and bears spill over to other markets. The observed post-break increases in synchronization possibly contain a permanent as well as a transitory component. First, one could imagine that the Asian crisis and its direct aftermath had a contagious character as many authors have claimed since then. Subsequently, policymakers and regulatory bodies implemented a myriad of measures but the recipes for both dampening the effects of the Asian crisis and reducing the potential of a future crises to strike and spread across borders were pretty similar in all affected countries. This “convergence” in post-crisis policy measures might itself have had a long run impact on the synchronization correlation. Disentangling the observed rise on synchronization correlations into a permanent and a transitory effect makes part of our future research agenda.