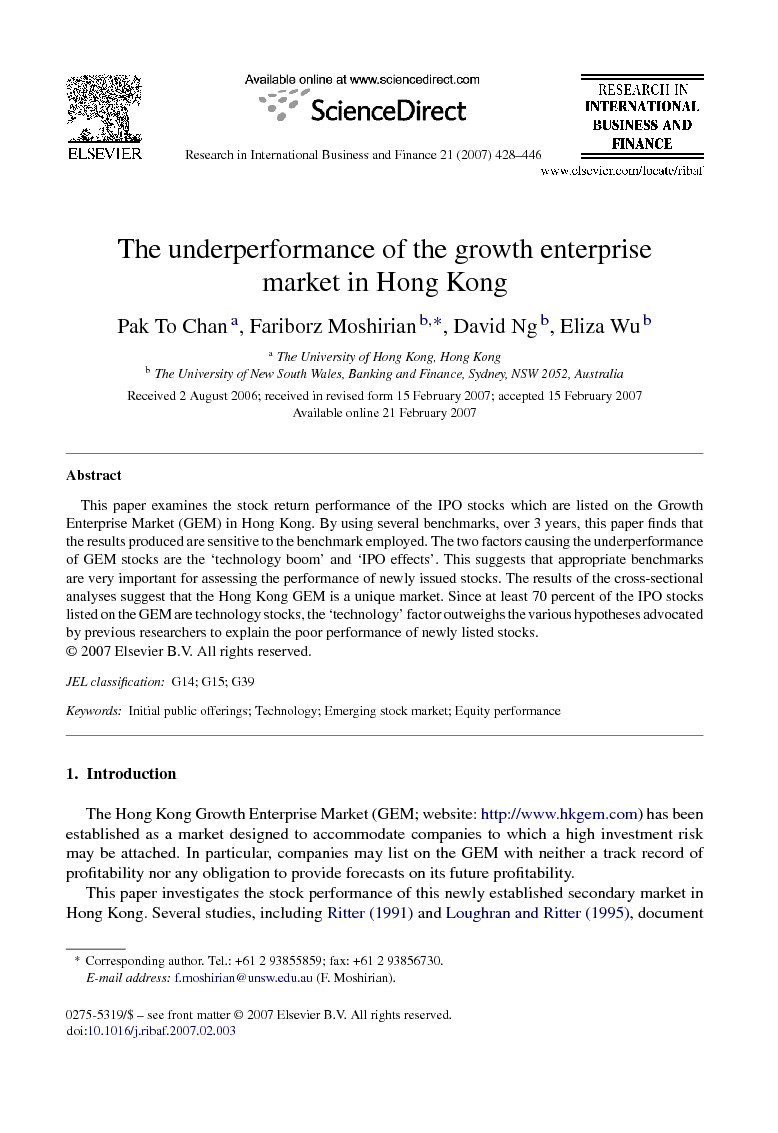 This paper examines the stock return performance of the IPO stocks which are listed on the Growth Enterprise Market (GEM) in Hong Kong. By using several benchmarks, over 3 years, this paper finds that the results produced are sensitive to the benchmark employed. The two factors causing the underperformance of GEM stocks are the ‘technology boom’ and ‘IPO effects’. This suggests that appropriate benchmarks are very important for assessing the performance of newly issued stocks. The results of the cross-sectional analyses suggest that the Hong Kong GEM is a unique market. Since at least 70 percent of the IPO stocks listed on the GEM are technology stocks, the ‘technology’ factor outweighs the various hypotheses advocated by previous researchers to explain the poor performance of newly listed stocks.

The Hong Kong Growth Enterprise Market (GEM; website: http://www.hkgem.com) has been established as a market designed to accommodate companies to which a high investment risk may be attached. In particular, companies may list on the GEM with neither a track record of profitability nor any obligation to provide forecasts on its future profitability. This paper investigates the stock performance of this newly established secondary market in Hong Kong. Several studies, including Ritter (1991) and Loughran and Ritter (1995), document severe underperformance of initial public offerings (IPOs). However, recent literature has suggested that the poor performance of IPOs extends to other firms with similar characteristics (Brav and Gompers, 1997 and Ritter and Welch, 2002). This paper seeks to assess whether IPO underperformance exists, or whether it is merely a result of misspecified tests in previous studies using the Hong Kong GEM data. There are several theories attempting to explain IPO long run underperformance. Miller (1977) states that costly short-selling and heterogeneous beliefs among investors ensure only the most optimistic investors or speculators will subscribe to IPOs. However, after the initial public issue, more information becomes available about a firm over time, and the variance of investor opinions decreases. The valuation of the most optimistic investors converges to the mean, and as a result, prices fall. It is argued that this hypothesis is consistent with the patterns in the 1999–2000 Internet bubble. On the other hand, Eckbo and Norli (2003) argue that IPOs have low returns because they actually have low risk, as indicated by high liquidity and low leverage. However, in a separate study, Ritter and Welch (2002) find a beta of 1.73 for their portfolio of IPOs, indicating a high exposure to market risk. Meanwhile, Teoh et al. (1998) attribute some of the poor post-IPO stock performance to optimistic accounting early in the life of the firm in order to induce investors to purchase their issue. However, persistent underperformance brings into question the rationality of the majority of investors who hold IPOs in the long run. This suggests that investors should have access to a profitable trading strategy. Proper benchmarks must be constructed and tested before concluding that ‘IPO underperformance’ is evidence of market inefficiency. Other studies in the literature, suggest an international aspect to IPO underperformance. For example, Jain and Kini (1994), Kutsuna et al. (2002) and Kim et al. (2002) provide evidence to show that firms exhibit significant underperformance subsequent to IPOs, in the US, Japan and Thailand, respectively. Using a sample of 85 GEM IPOs in the period from November 1999 to August 2001, this paper attempts for the first time in this new emerging stock market, to examine IPO performance. Our methodology builds on that previously used in Loughran and Ritter (1995). In addition to calculating the buy-and-hold abnormal returns (BHARs) based on the Hang Seng Index, we also calculate the BHARs based on the industry and book-to-market ratio, the industry and size and the size and book-to-market matched control firm approaches. Following Barber and Lyon (1997), we use BHARs over a 3-year holding period, and conduct a parametric t-statistic test. We also perform regression analyses to facilitate our investigation into the determinants of IPO performance on the GEM. This paper makes three contributions to the IPO literature. Firstly, we find that IPO stock performance is sensitive to the benchmark employed. There are two reasons for the underperformance of GEM stocks—the ‘technology boom’ and ‘IPO effects’. By splitting the IPO sample into non-technology and technology GEM stocks, we find that underperformance occurs only on the technology stocks 1 year after their official listings and not on the non-technology stocks, based on the Hang Seng Index BHAR calculations. By matching the GEM firms with control firms based on size and industry or book-to-market (BTM) and industry, we eliminate the impacts of the ‘technology boom’ or other effects which are irrelevant to the IPO effects. There is evidence of underperformance of GEM firms 2 years after their official listings. This suggests that ‘IPO effects’ do exist in the HKGEM. Secondly, by splitting the sample based on the median of the initial returns and the median of the retention of ownership, our results do not support the agency and signaling hypotheses (Jensen and Meckling, 1976 and Leland and Pyle, 1977). Since at least 70 percent of the IPO stocks listed on the GEM are technology stocks, HKGEM is a unique market and we reveal that the technology effect predominantly explains the underperformance of the GEM stocks in the period from 1999 to 2001. Finally, we find that the GEM firms using the “offer for placing” listing method performs better than firms using the “offer for subscription” and “offer for sale” listing methods. The remainder of the paper is organized as follows: Section 2 introduces the Hong Kong GEM; Section 3 reviews the existing literature on IPO underperformance; Section 4 describes the dataset used; Section 5 describes the methodology; Section 6 discusses the empirical results and finally, Section 7 concludes.

This paper examines the stock return performance of the IPO stocks which are listed on the Growth Enterprise Market (GEM) in Hong Kong. In the period from November 1999 to August 2001, for an investor whom subscribes to the IPO stocks and sells the stocks on the first-trading day, the average initial return is 43 percent. By calculating the BHARs based on the Hang Seng Index and splitting the samples based on the type of business activity, underperformance exists in the technology sector whereas the non-technology sector does not underperform in the long run. This result suggests that a ‘technology effect’ causes the underperformance of GEM stocks. Alternatively, we calculated the BHARs based on the size and book-to-market, industry and size, and industry and book-to-market matched control firm approaches. Further investigations reveal that the underperformance of the IPO firms occurs 1-year after the official listing of the GEM stocks based on the size and book-to-market (BTM) matched control firm approach. The results are consistent with the BHARs calculated by the market index. By matching the IPO firms with control firms based on size and industry or book-to-market (BTM) and industry matched control firm approach, we can eliminate the impacts of the ‘technology boom’ or other effects which are irrelevant to the IPO effects. Even though the buy-and-hold abnormal returns calculated by the industry and size and industry and book-to-market (BTM) matched control firm approaches are weaker than the BHARs calculated by the size and book-to-market (BTM) matched control firm approach, negative and statistically significant abnormal equity returns still exist 2 years after the official listing. This suggests that ‘IPO effects’ exists in the HKGEM. Therefore, the two factors that cause the underperformance of GEM stocks are the technology and IPO effects. Like previous studies, our results are sensitive to which benchmarks and methodologies are used. The results of the cross-sectional analyses suggest that the HKGEM is a unique market. Since at least 70 percent of the IPO stocks listed on the GEM are technology stocks, the ‘technology’ factor outweighs the hypotheses advocated by previous researchers to explain the poor performance of new stock listings. The Agency Cost hypothesis (Jensen and Meckling, 1976), Signaling hypothesis (Leland and Pyle, 1977) and Market Timing hypothesis (Jain and Kini, 1994) are not applicable to the HKGEM. Future research can focus on the intra-day data to understand the microstructural effects of market volatility, trading volume and liquidity for the observed underperformance of the GEM stocks.