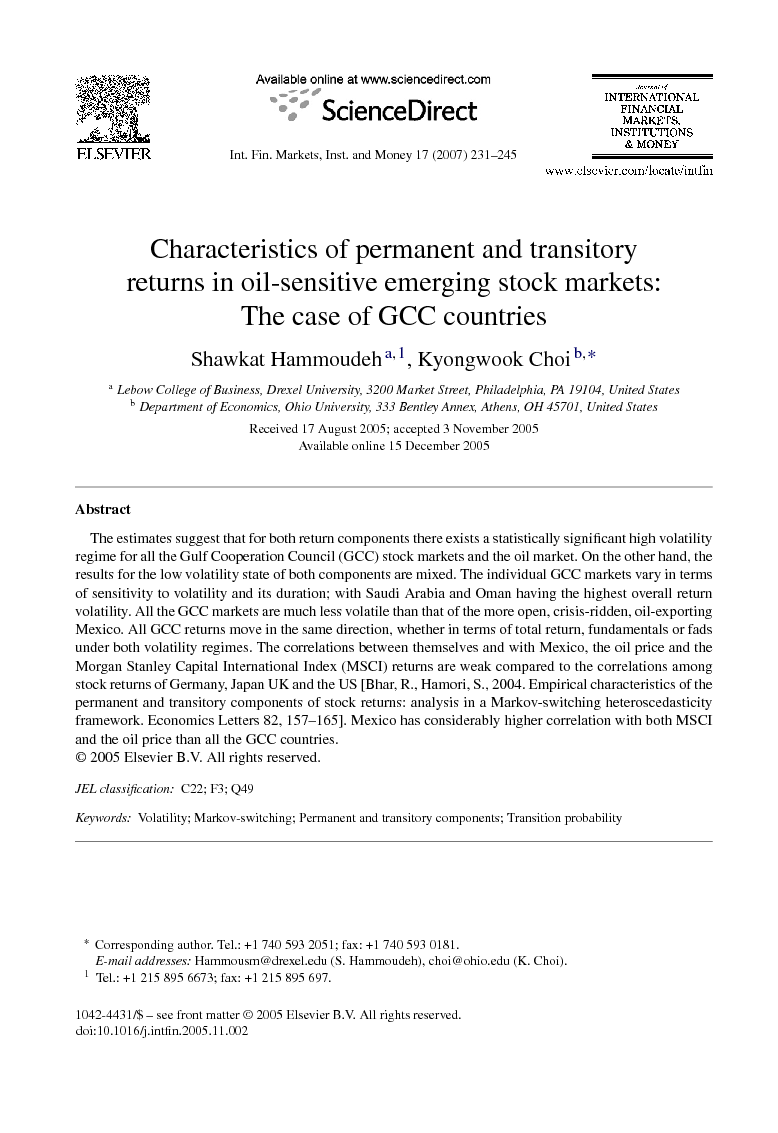 The estimates suggest that for both return components there exists a statistically significant high volatility regime for all the Gulf Cooperation Council (GCC) stock markets and the oil market. On the other hand, the results for the low volatility state of both components are mixed. The individual GCC markets vary in terms of sensitivity to volatility and its duration; with Saudi Arabia and Oman having the highest overall return volatility. All the GCC markets are much less volatile than that of the more open, crisis-ridden, oil-exporting Mexico. All GCC returns move in the same direction, whether in terms of total return, fundamentals or fads under both volatility regimes. The correlations between themselves and with Mexico, the oil price and the Morgan Stanley Capital International Index (MSCI) returns are weak compared to the correlations among stock returns of Germany, Japan UK and the US [Bhar, R., Hamori, S., 2004. Empirical characteristics of the permanent and transitory components of stock returns: analysis in a Markov-switching heteroscedasticity framework. Economics Letters 82, 157–165]. Mexico has considerably higher correlation with both MSCI and the oil price than all the GCC countries.

Fads or speculative attacks are short-lived phenomena that affect the world's stock and oil markets such as the 1982 Kuwait market crash, the 1987 US market crash, the 1994 Mexican crisis and the 1998 oil market collapse, among others. In these crashes or crises the markets experience a large drop in stock or oil prices and a dramatic jump in volatility. The fads or attacks can be caused by noisy traders who under price misperceptions bid stock or oil prices away from the fundamentals, leading to underpricing (De Long et al., 1990). Although the fad volatility usually reverts to normal levels quickly, this transitory volatility can cause tremendous damage to wealth and social well-being, as happened in the crashes and crises noted above. Therefore, it is important to consider an economic variable such as a stock and/or an oil return in terms of its permanent (or fundamental) component, and its transitory (or fad) component in order to determine the volatility and the expected volatility durability of the fad relative to that of the fundamental. The recent literature has studied the decomposition of the stock return within the state-space framework while allowing for volatility transition between regimes for the return itself and for each of its components. Several authors have proposed different methods of decomposing a time series into permanent and transitory components. Nelsson and Plosser (1982) matched a model consisting of transitory and permanent components to an autocorrelation function to determine the relative sizes of these two components. Watson (1986) and Clark (1987) used the conventional unobserved component model (without Markov-switching) to decompose GNP into these two constituents. Campbell and Mankiw (1987), employing an ARMA representation of a time series, estimated the impact of a shock on long-run forecasts to weigh up the relative importance of the two components. More recent methods examined the decomposition by focusing on the existence of mean reversion in stock returns. Fama and French (1988) used an autoregressive test and found mixed results on the existence of mean reversion in the transitory and permanent components. Kim and Kim (1996) and Kim and Nelson (1999) examined the relative importance of the two components within the framework of the state-space model with Markov-switching heteroskedasticity. Bhar and Hamori (2004) applied the Kim and Kim (1996) model to some of the OECD countries.1 Most of the research on volatility switching has focused on the stock markets of the developed countries. To our knowledge, this line of research has not been applied to many developing countries including the increasingly important stock markets of the Gulf Cooperation Council (GCC) which includes Bahrain, Kuwait, Qatar, Oman, Saudi Arabia and United Arab Emirates (UAE).2 Recent research on the GCC markets has used the error-correction model to examine co-movements and interactions of the stock returns (Hammoudeh and Elesia, 2004), and the standard GARCH model to analyze return volatility (Malik and Hammoudeh, 2006). However, no attempt has been made to examine the relative volatility and regime switching of the permanent and transitory components of the total returns of these oil-based emerging markets such as the GCC and Mexican markets. This study will use the empirical model of Kim and Kim (1996) and Bhar and Hamori (2004) to examine the volatility of the decomposed stock returns of the GCC returns and compare it to that of Mexico. The market capitalization of the GCC-5 markets as a group (not including Qatar) was about US$ 172 billion at the end of 2002. Since then it has risen rapidly to reach about $493 billion at the end of 2004 because of the recent high oil prices,3 high liquidity and increasing movements towards privatization and investing more domestically. The GCC markets have strong future potential gains because of their countries’ ownership of huge oil reserves. These countries together account for 16% of the world output and possess 47% of the world's oil reserves. The GCC markets are also different from those of the developing countries and from other emerging markets. In the GCC markets herding, fads, and speculative attacks do not occur because of capital flows quickly into and out of markets as is the case in other emerging markets. Volatility can be traced back to the types of companies that are publicly traded and dominate the stock markets—largely banks, and real estate, construction and communications companies. Herding, fads and speculative attacks exist in these companies because their returns are particularly uncertain, which also combined with lax information disclosure requirements, may cause problems of rash trading based on patchy news. The GCC markets’ component volatility and duration will be compared with those of Mexico, which is also a major oil exporter but is not a member of OPEC. Mexico has a more diversified and developed economy and stock market, and is also located in a different region in which it has closer economic relationships with the United States.4 It will be interesting to see the difference in the behavior of the fundamental and transitory volatilities between the GCC countries and Mexico under both low and high variance regimes. Therefore, the desired objectives of this paper are: 1. to decompose the stock returns of the GCC stock markets into permanent and transitory components in order to measure the switch in volatility between the high and low variance regimes for those components; 2. to measure the expected duration of the volatility, in terms of trading weeks for the high and low variance regimes of the transitory component which has implications for long-run return predictability; 3. to measure the correlations between the volatilities of the individual GCC stock markets and with the oil market to ascertain whether or not these markets move in the same or opposite direction; and 4. to compare the GCC volatility and duration with those for Mexico which is also an oil-exporter but has a more open, diversified and developed stock market and economy than the GCC countries, and is located in a completely different region. The paper is organized as follows. Section 2 describes the oil and financial data, and Section 3 presents the empirical model and casts the objectives into hypotheses. Section 4 analyzes the results and Section 5 concludes.

The conclusions are pertinent to both investors and policy makers. Since the study shows that there exist two possible volatility regimes in the two components of almost all stock returns of the GCC countries, then risk-averse investors should demand higher compensations when the economy enters into the high variance state regardless whether the increase in volatility is coming from a shock in the fundamental or in the transitory component. Moreover, volatility during fad times is much higher than volatility due to shocks in the fundamentals regardless of the state of the economy. It seems that at times of increases in fads and speculative attacks noisy traders experience changes in price misperceptions and that considerably increases the risk in all the GCC markets. Thus rational investors or speculators should ask for much higher premiums during fad times. The risk-averse investors in the Saudi Arabia market should particularly ask for the highest premium among the five GCC markets when the economy enters the high variance state of the fad component. The Omani market comes next. These two markets should particularly consider introducing safety valves and financial hedge instruments that can protect investors during the high variance state of the fad times. The spot oil market plays an important role in determining the returns of the GCC stocks during changes in the fundamentals and the fads. The additional oil variance (of the high variance state) for both components is particularly higher than the corresponding variance for most of the GCC stock markets. Diversifying away from oil should increase market efficiency and reduce volatility. The GCC markets also vary in the duration of volatility across regimes and for the two components. Oman and Saudi Arabia have the longest volatility durations as a result of shocks in the fundamentals such as the oil price, interest rates, profits and other economic policy variables. In this case, risk-averse investors and traders in these two countries should opt for longer term investments than in the other markets in order to ride out the fundamental volatility. Monetary authorities and financial policy-makers should also be aware of the longer-lasting volatility in both fundamental's states for those two markets. They should encourage the introduction of sophisticated financial instruments (e.g., options, futures) to reduce risk and volatility, and the establishment of investment funds (e.g., pensions funds) which should act as a support for the markets. 13 Governments should gradually liquidate their equity holdings which they rarely trade. At the pan-GCC level, amalgamation of the individual markets can increase efficiency at least through partial elimination of the problems related to thin trading ( Simpson, 2004). Bahrain has the longest duration in both the low and high variance states of the fads. In terms of movements of the returns, all GCC returns move in the same direction whether in terms of total return, fundamentals or fads under both volatility regimes, suggesting that they are commoved by a common factor such as political stability, liquidity and/or the oil price in the short- and long-runs. The highest movements are between Kuwait and Bahrain, and between Bahrain and Saudi Arabia, which makes these markets relatively the least eligible candidates for portfolio diversification among the GCC markets. There are also relatively high correlations between Kuwait and Saudi Arabia. Overall, the correlations among the GCC whether in terms of the return itself, the fundamental or the fad are low compared to those found for Germany, Japan, UK and the US by Bhar and Hamori (2004). Thus, investors should do their homework before investing in these countries. Compared to Mexico, the GCC countries have considerably weaker links with both the world capital and oil markets. Thus, they provide better equity portfolio diversification than Mexico.