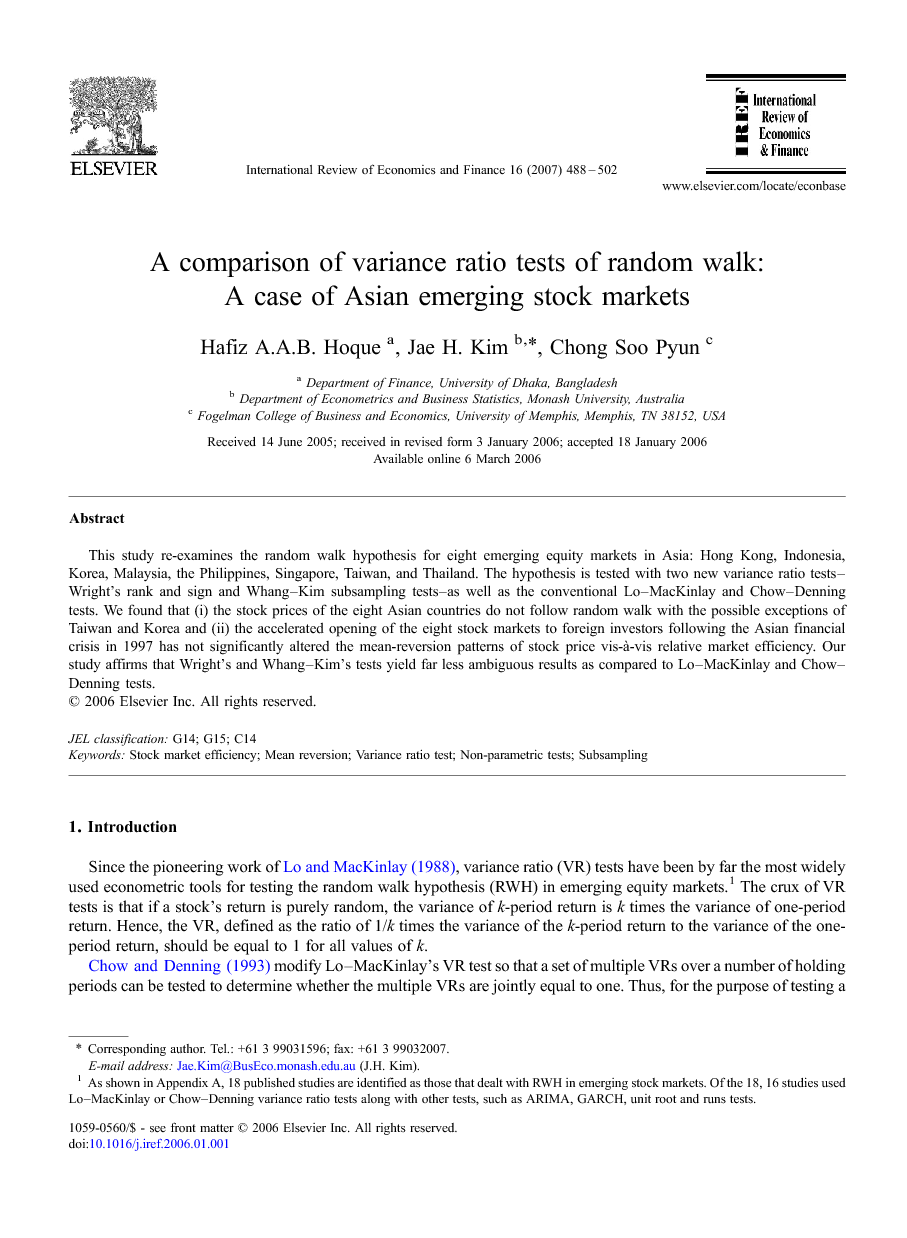 This study re-examines the random walk hypothesis for eight emerging equity markets in Asia: Hong Kong, Indonesia, Korea, Malaysia, the Philippines, Singapore, Taiwan, and Thailand. The hypothesis is tested with two new variance ratio tests–Wright's rank and sign and Whang–Kim subsampling tests–as well as the conventional Lo–MacKinlay and Chow–Denning tests. We found that (i) the stock prices of the eight Asian countries do not follow random walk with the possible exceptions of Taiwan and Korea and (ii) the accelerated opening of the eight stock markets to foreign investors following the Asian financial crisis in 1997 has not significantly altered the mean-reversion patterns of stock price vis-à-vis relative market efficiency. Our study affirms that Wright's and Whang–Kim's tests yield far less ambiguous results as compared to Lo–MacKinlay and Chow–Denning tests.

Since the pioneering work of Lo and MacKinlay (1988), variance ratio (VR) tests have been by far the most widely used econometric tools for testing the random walk hypothesis (RWH) in emerging equity markets.1 The crux of VR tests is that if a stock's return is purely random, the variance of k-period return is k times the variance of one-period return. Hence, the VR, defined as the ratio of 1/k times the variance of the k-period return to the variance of the one-period return, should be equal to 1 for all values of k. Chow and Denning (1993) modify Lo–MacKinlay's VR test so that a set of multiple VRs over a number of holding periods can be tested to determine whether the multiple VRs are jointly equal to one. Thus, for the purpose of testing a null hypothesis, Lo–MacKinlay VR test is an individual test while the multiple VR test of Chow and Denning is a joint test.2 Even though the multiple VR test is quite powerful testing for homoscedastic or heteroscedastic nulls (Smith, Jefferis, & Ryoo, 2002), it is critical to note that the multiple VR test as well as its forerunner–Lo–MacKinlay VR tes–are asymptotic tests in that their sampling distributions are approximated by their limiting distributions.3 Recently, Wright (2000) and Whang and Kim (2003), respectively, have proposed two alternatives to conventional asymptotic VR tests—Wright with his “rank and sign” VR tests and Whang and Kim with their “subsampling” version of the Chow and Denning (1993) test. Wright's (2000) tests are exact tests whose sampling distributions do not resort to asymptotic approximations. Although the validity of Whang and Kim (2003) test is based on asymptotic arguments, it is important to note that its critical values (p-values) are not obtained from asymptotic approximation to the sampling distribution: they are obtained from a small sample approximation. To the best of our knowledge, Buguk and Brorsen (2003) is the only study that employs Wright's (2000) rank and sign VR tests in evaluating the RWH for the Istanbul Stock Exchange. Wright's tests have not been applied to Asian emerging markets; while Whang and Kim's (2003) subsampling test has never been used in the evaluation of the RWH in any emerging stock markets. Three motivations for our study are indicated. Firstly, emerging stock markets in Asia have become increasingly important to the safety and vitality of the global financial markets as shown in recent studies (see Al-Khazali & Pyun, 2004, Khil & Lee, 2000 and Lima & Tabak, 2004). Secondly, since the Asian financial crisis in 1997, the structure and operations of Asian stock markets have been markedly strengthened and improved, and there has been a renewed interest on Asian emerging stocks among investors for higher returns through a global portfolio diversification.4 Lastly, findings on the RWH in Asian emerging markets to date are still tentative, often fraught with conflicting statistical inferences. For instance, Chang and Ting (2000) show that while the RWH cannot be rejected for the Taiwan Stock Exchange with monthly, quarterly and annual data, it is rejected with weekly returns. Huang (1995) reports the rejection of the RWH for the markets of Korea, Malaysia, Hong Kong, Singapore and Thailand while Ayadi and Pyun (1994), Malliaropulos and Priestley (1999), and Ryoo and Smith (2002) confirm that the stock prices of these Asian emerging markets are on balance mean-reverting.5 The purpose of this paper is twofold: (i) to compare inferential outcomes of Wright's and Whang–Kim VR test results with those of Lo–MacKinlay and Chow–Denning VR tests for the evaluation of the RWH in eight Asian emerging equity markets (Hong Kong, Indonesia, South Korea (hereinafter Korea), Malaysia, the Philippines, Singapore, Taiwan, and Thailand); and (ii) to ascertain any changes in the random walk patterns of stock prices at the eight individual Asian markets following the Asian crisis with the two new VR tests of Wright (2000) and Whang and Kim (2003). Our findings show that the stock prices of the eight emerging markets are mean-reverting, which means that these markets are not weak-form efficient with the possible exceptions of Taiwan and Korea, and that the accelerated opening of their respective stock markets to foreign investors in the aftermath of the Asian financial crisis in 1997 has not significantly altered the random walk patterns of stock price vis-à-vis market efficiency in the emerging market on balance. Our findings also support the notion that Wright's rank and sign and Whang–Kim's subsampling VR tests yield statistical results, which are less ambiguous as compared to the conventional VR tests, particularly when sample sizes are relatively small. The rest of the paper is organized as follows. Section 2 presents a brief literature survey, while Section 3 provides the data description. Section 4 discusses and compares conventional VR tests with the two new finite sample tests used in this study. Section 5 reports the empirical results, followed by a summary and our conclusions in the final section.

In this paper, we implemented alternative variance ratio tests to evaluate the issue of whether or not emerging stock markets follow a random walk: were stock prices in the eight emerging markets in Asia mean-reverting? The conventional tests implemented are the Lo–MacKinlay and the Chow–Denning tests, while Wright's (2000) rank and sign tests and Whang and Kim's (2003) subsampling test are fairly new. The main advantage of the latter over the former is that the latter does not rely on the asymptotic approximations to the sampling distributions of the statistic. This is because Wright's and Whang–Kim's methods use the exact distributions or data-intensive approximations to the sampling distribution of the statistic. Monte Carlo simulation results of these two tests, reported in Wright (2000) and Whang and Kim (2003), clearly show that the two new finite sample tests give rise to better size and power properties in their critical statistics. The major findings of our study are that during the period under study (from 1990 to 2004) five individual stock markets in emerging countries–Indonesia, Malaysia, the Philippines, Singapore and Thailand–show significant mean-reverting and predictable behavior in their weekly returns series, while two markets–Taiwan and Korea–exhibit some mean-reverting, but largely unpredictable patterns in the same series. These findings are in large part consistent with many recent studies,12 which show that the stock price behavior of many emerging markets are often inter-temporally predictable and that the pattern of their inter-temporal predictability can be exploited by astute investors. While it is more pronounced in emerging markets, the inter-temporal predictability of mean-reversion in stocks is also observed in the U.S. and European markets. The crux of the issue within the framework of the efficient market hypothesis is whether or not stock markets capture sufficient risk premium into future stock prices so that investors relying on past price information will be able to earn risk-adjusted abnormal returns. Even though it is generally agreed that equity markets in developed countries are weak-form efficient, the phenomena of inter-temporal predictability have been reported for both developed and emerging stock markets and the phenomena are still defined and implemented in the financial literature largely as empirical questions.13 It should be emphasized that this predictability of mean-reversion found in the Asian emerging markets may be exacerbated by two structural factors common to all emerging equity markets. Firstly, the markets may suffer from the effect of thinly traded stocks: not only are the sizes of many listed firms small, but also shares of these firms are thinly traded at times. Abraham et al. (2002) on Middle East stock markets show that when raw data are used, the RWH is rejected. When the data are corrected for thinly traded stocks, statistical inference is opposite to what they had found with the uncorrected data. Secondly, the effects of information asymmetry among various participants are widespread (Hahm & Mishkin, 2000) and their diverse financial institutions are still in an early stage of growth. In this respect, the mean-reverting patterns detected in many Asian emerging markets may strongly suggest inter-temporal inefficiency, which may be more structural in its origin than occasional, irrational behavior on the part of investors. In this respect, our results reinforce the findings by Van der Hart, Stagter, and van Dijik (2003) that inter-temporal inefficiency in emerging markets does exist and that the inefficiency may be exploitable by both domestic and foreign investors. Finally, our analysis with Asian data shows that Wright's (2000) rank and sign and Whang and Kim's (2003) subsampling tests yield inferential outcomes that are far less ambiguous as compared to the Lo–MacKinlay and Chow–Denning VR tests, particularly when sample size is small. We believe that the two new VR tests (Wright's and Whang–Kim's tests) constitute an experimental tool of sufficient quality worthy for the re-evaluation of the RWH reported in the literature on other emerging markets of the world.