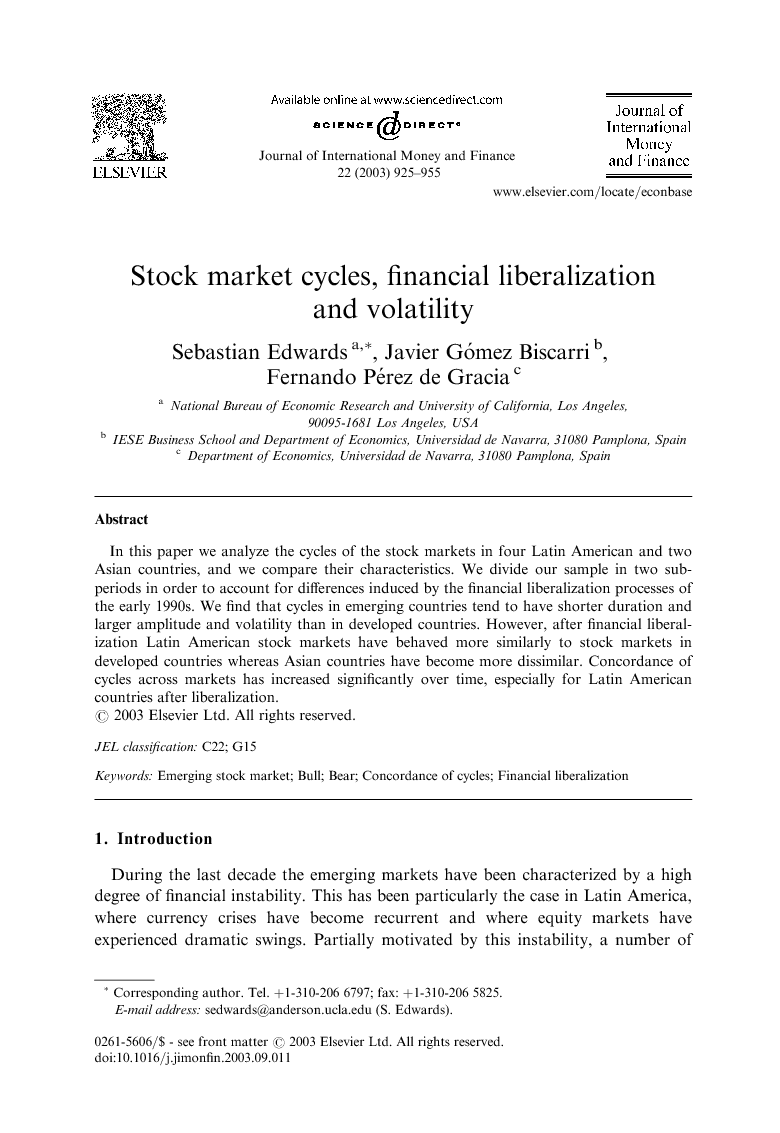 During the last decade the emerging markets have been characterized by a high degree of financial instability. This has been particularly the case in Latin America, where currency crises have become recurrent and where equity markets have experienced dramatic swings. Partially motivated by this instability, a number of authors have recently investigated the behavior of Latin American financial markets.1Fischer (2002), for example, has analyzed the implications of the Latin American currency crises for the future of the international monetary system. Eichengreen (2003), De Gregorio et al. (2000), and Edwards (1999) have investigated the role played by capital mobility in Latin America during the financial crises of 1990s. Goldstein (2003) has looked more specifically at the forces behind the financial turmoil in Brazil during 2002. Rigobon (2003) has focused on alternative volatility measures in both equity and bond markets in the period surrounding recent financial crises. Kaminsky and Reinhart (2002) have investigated how interest rates, equity returns and bond spreads behave in times of global financial stress. Their main interest was to analyze whether these variables exhibited co-movement across countries. Bekaert and Harvey (2000) analyzed equity returns in a group of emerging markets, including six Latin American countries, before and after the financial reforms. Edwards and Susmel (2003) investigated the time pattern of interest rate volatility in four Latin American countries, and compared them to that of Hong Kong. Other recent studies on financial volatility and contagion in the emerging markets, including Latin America, are Karolyi and Stulz, 1996, Janakiramanan and Lamba, 1998, Edwards, 2000, Eichengreen and Mody, 2000, Bekaert et al., 2002a, Bekaert et al., 2002b, Chakrabarti and Roll, 2002, Chen et al., 2002 and Forbes and Rigobon, 2002 and Bekaert et al. (2003). An important question, and one that we address in this paper, is whether stock markets have similar features in the emerging nations and in the advanced countries. The answer to this question is particularly germane to the current debate on the role of financial liberalization and macroeconomic instability in the emerging and transition economies. Some authors – including Krugman (2000) and Stiglitz (2002) – have argued that financial markets in emerging nations are poorly developed and thus they do not function properly – e.g. in the way that financial markets in advanced countries do. Under these circumstances, the argument goes, the emerging nations should not liberalize fully their capital markets; instead, they should impose some form of controls that regulate cross-border movements of portfolio capital. More specifically, in this paper we analyze stock market cycles in a group of Latin American countries: We investigate the characteristics of stock market cycles in Argentina, Brazil, Chile and Mexico during 1975–2001, and we focus on the behavior of “bear” and “bull” markets, as defined by Pagan and Sossounov (2003), among others: “Bull” and “bear” phases of stock markets are identified with periods of a generalized upward trend (positive returns) and periods of a generalized downward trend, respectively.2 We make a distinction between the pre- and post-financial reform periods of the 1980s and 1990s, and we concentrate on the following characteristics of stock market cycles: Duration, amplitude and volatility. In addition, we analyze the extent to which returns depart from a triangular representation, and we investigate the occurrence of big expansions and contractions. The results from this cycle analysis are then used to compare the behavior of these four Latin American equity markets with those of two Asian nations – South Korea and Thailand –, as well as with those of the US and Germany. The emerging stock markets analyzed in this paper – Argentina, Brazil, Chile, Mexico, South Korea and Thailand – represent a highly diverse sample: During the period under consideration they had different regulations regarding international capital mobility, different domestic supervisory systems and different exchange rate regimes.3 Moreover, all of them, with the exception of Chile, faced serious crises during the last few years. This diverse data set, then, allows us to investigate the behavior of bull and bear markets under different institutional settings and under different external environments. We are particularly interested in addressing the following questions: • Is it possible to (unequivocally) detect bull and bear markets in these Latin American and Asian countries? • Do bull and bear markets in emerging countries behave similarly to those in the more advanced nations? • Has stock market volatility been different across these countries? Has it changed through time? Is stock market volatility different in these countries than in the benchmarks represented by two advanced countries (the US and Germany)? • How do bear and bull market cycles compare across the emerging markets in our sample? What do these comparisons tell us – if anything – about the effects of financial liberalization? • Is it possible to explain the behavior of stock market cycles in our emerging markets using traditional models, including those in the “random walk” family? The rest of the paper is organized as follows: In Section 2 we present the methodology used to identify bull and bear markets. In Section 3 we discuss the results of our cycle analysis, and we conclude that bear and bull phases have behaved in a significantly different way in emerging and advanced countries, but the differences seem to diminish in the post-financial liberalization period. In Section 4 we deal with the issue of concordance or synchronicity of the cycles across countries. The main findings in this section point at an increased synchronicity of the stock markets in emerging countries, which move in a more parallel way during the 1990s than they did in earlier periods. Both the financial liberalization processes of the early 1990s and the financial crises of that decade seem to have contributed to this increased synchronicity. Section 5 complements the analysis in 3 and 4 by looking at a specific characteristic of the cycle that allows for formal significance tests on the shape, and some predictability features, of the cycle phases. Finally, in Section 6 we present a brief summary of the results and some concluding remarks regarding the directions for future research that our paper opens.