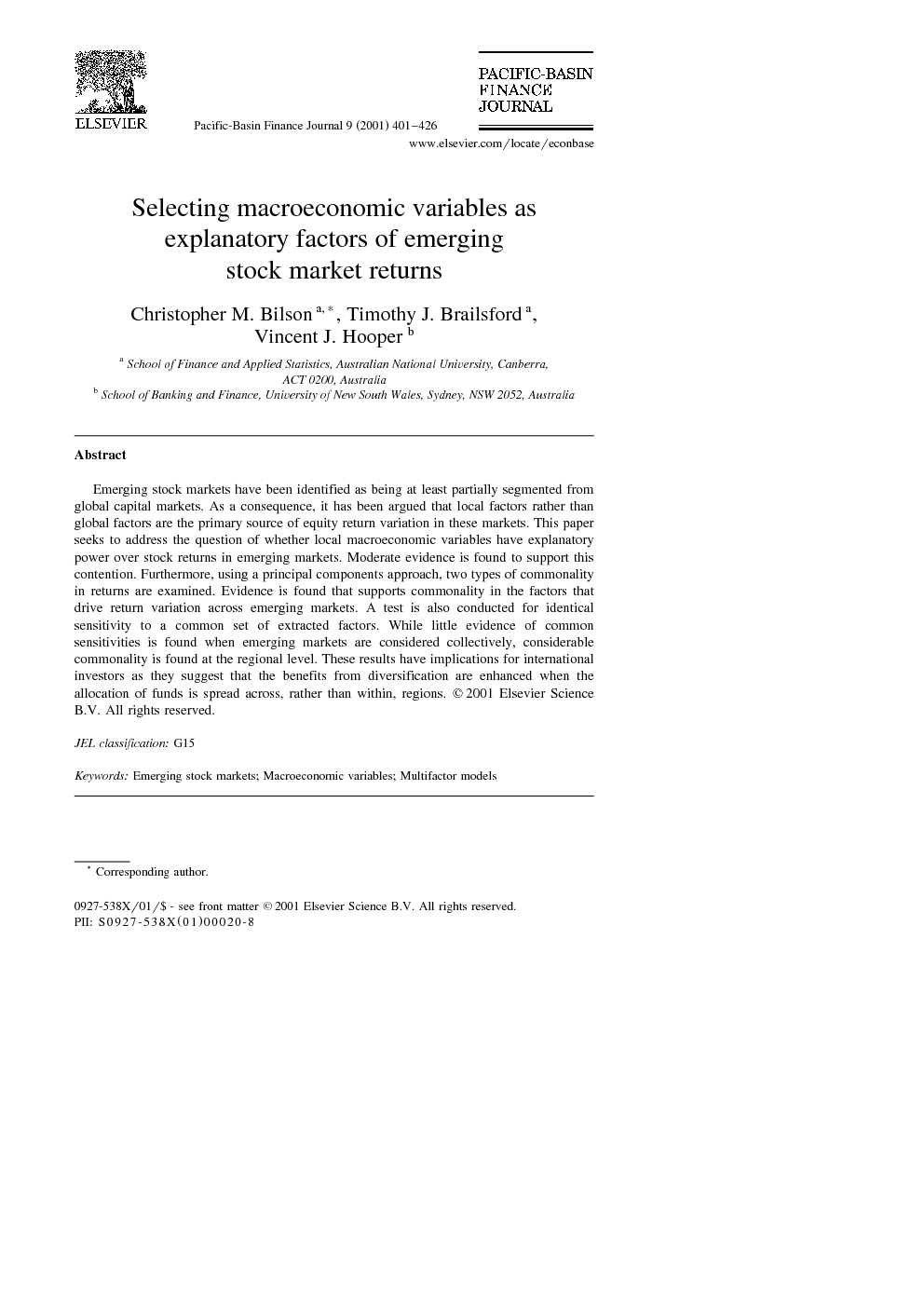 Emerging stock markets have been identified as being at least partially segmented from global capital markets. As a consequence, it has been argued that local factors rather than global factors are the primary source of equity return variation in these markets. This paper seeks to address the question of whether local macroeconomic variables have explanatory power over stock returns in emerging markets. Moderate evidence is found to support this contention. Furthermore, using a principal components approach, two types of commonality in returns are examined. Evidence is found that supports commonality in the factors that drive return variation across emerging markets. A test is also conducted for identical sensitivity to a common set of extracted factors. While little evidence of common sensitivities is found when emerging markets are considered collectively, considerable commonality is found at the regional level. These results have implications for international investors as they suggest that the benefits from diversification are enhanced when the allocation of funds is spread across, rather than within, regions.

A number of studies document that a relationship exists between macroeconomic variables and equity market returns. Furthermore, studies concerning multifactor models frequently incorporate macroeconomic variables as explanatory factors of the variation in equity returns. However, these studies have typically focused on developed markets. This paper extends this literature by considering the relationship in an emerging markets context. To date, the literature on multifactor models in emerging markets has focused primarily on either microeconomic effects such as dividend yields and price-to-earnings ratios or the impact of world influences such as the world equity portfolio. Generally, the literature has not examined the potential impact that macroeconomic variables may have on emerging stock market returns. Interest in emerging markets has grown considerably over the past decade. Given political and economic structures that previously existed, little was known about these markets and international investment levels were low, in part due to costly barriers to entry. However, since the 1980s, there have been substantial changes in political and economic environments in many regions, such as China, Eastern Europe, Latin America and Russia. As a result, emerging markets now represent a feasible investment alternative for international investors and the last decade has witnessed massive capital flows in and out of emerging stock markets.1 Emerging stock markets (ESMs) appear to have features that distinguish them from other stock markets. Returns and risks in ESMs have been found to be higher relative to developed markets2Errunza, 1983, Claessens et al., 1993 and Harvey, 1995a. Furthermore, the returns achievable from emerging stock markets appear more predictable than developed markets and exhibit stronger mean reversion properties Bekaert, 1995, Bekaert and Harvey, 1995 and Harvey, 1995a, with a higher degree of autocorrelation. There is evidence to suggest that emerging stock markets are segmented from world capital markets. Moreover, Bekaert and Harvey (1995) suggest that some emerging markets exhibit time-varying integration, as they appear to be more integrated than expected based on prior knowledge of investment restrictions. Other markets appear to be quite segmented even though foreigners have relatively free access to their capital markets. Recent evidence by Goetzmann and Jorion (1999) shows that emerging markets may go through several phases of ‘emergence’ and should not be viewed as static. A consequence of the segmented nature of these markets is that local information has increased importance (Harvey, 1995b). This feature potentially allows an international investor to enhance the mean-variance efficiency of their portfolio Errunza, 1977 and Divecha et al., 1992. However, the diversification benefits will be greatest when the factors driving return variation are uncorrelated across markets. In this paper, two questions are investigated. First, the paper investigates the extent to which macroeconomic variables are able to explain the variation in equity returns in emerging stock markets. The paper initially investigates whether a set of pre-determined global and local macroeconomic variables have explanatory power over emerging market returns. Moderate support is found to support significant association between some of the local macroeconomic variables and returns. Second, the degree of commonality between emerging market returns is examined. To accomplish this, the common variation in a combined macroeconomic and microeconomic variable set is extracted using Principal Components Analysis (PCA). The results show that while ESMs are segmented to a degree, there is significant commonality in return variation across markets. Furthermore, little evidence of common sensitivities to the extracted factors is found when the markets are considered in aggregate, but common sensitivity is found at the regional level. These findings imply that diversification benefits may be more efficiently achieved through concentrating on factor exposures rather than the markets themselves. As such, the findings have implications for international investors and the understanding of return variation across these markets. The paper is organised as follows. Section 2 presents a discussion of the role of macroeconomic factors in the context of ESMs and the models. Section 3 discusses the data used in the empirical tests. Section 4 analyses the results and Section 5 concludes the paper.

A number of studies have found that a relationship exists between macroeconomic variables and equity market returns. This paper extends the literature by considering the relationship within an emerging markets context. A multifactor model is proposed that incorporates both global and local factors, thus, recognising the partially segmented nature of emerging markets. Global factors are proxied by the world market return and local factors by a set of macroeconomic variables. The variables employed are money supply, goods prices, real activity and exchange rates. Some evidence is found that shows these variables are significant in their association with emerging equity returns above that explained by the world factor. When a larger set of variables is considered the explanatory power of the model substantially improves such that it is able to explain a large amount of the return variation for most emerging markets. The microeconomic effects of price-to-earnings and dividend yield are most apparent. This evidence appears to point to a model where local factors are most relevant. The paper then makes use of this set of variables to investigate the degree of commonality between emerging equity market returns. Principal components are extracted and returns for each market are regressed against each component. The results show that emerging market returns indeed have similar sensitivities to a number of these factors. Commonality is particularly evident when regions are considered. The finding of commonality in sensitivities across markets has implications for international investors as it suggests a limitation to diversification, concentrated particularly at the regional level. These results are relevant when it is considered that many investors gain access to emerging markets via portfolios (i.e. mutual funds). The findings suggest that investors should diversify across specialised regional funds. That is, the benefits from diversification are enhanced when the allocation of funds is spread across, rather than within, regions. Furthermore, models that seek to explain return variation should not only consider a country's level of integration with world financial markets, but should also cater for a country's level of regional integration.