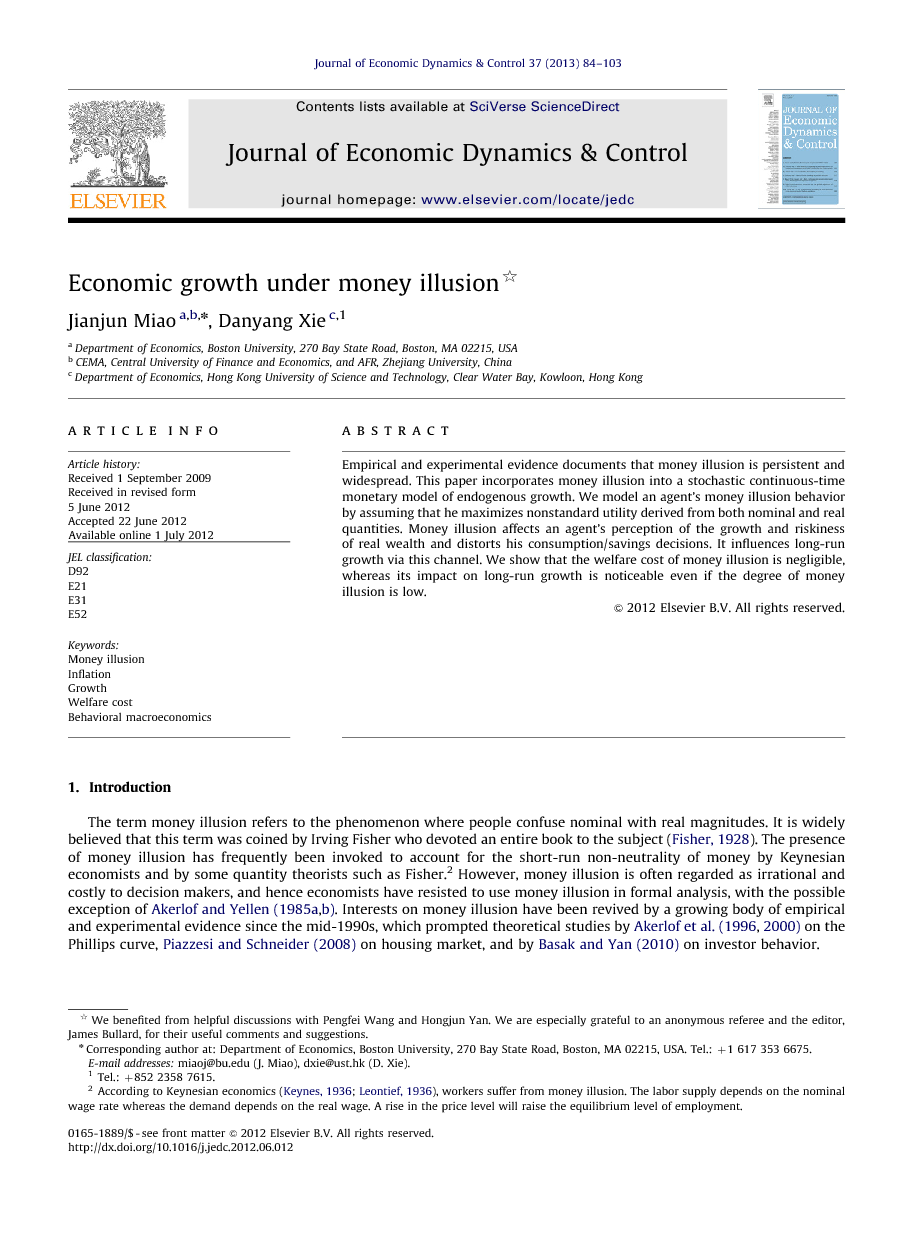 The term money illusion refers to the phenomenon where people confuse nominal with real magnitudes. It is widely believed that this term was coined by Irving Fisher who devoted an entire book to the subject (Fisher, 1928). The presence of money illusion has frequently been invoked to account for the short-run non-neutrality of money by Keynesian economists and by some quantity theorists such as Fisher.2 However, money illusion is often regarded as irrational and costly to decision makers, and hence economists have resisted to use money illusion in formal analysis, with the possible exception of Akerlof and Yellen, 1985a and Akerlof and Yellen, 1985b. Interests on money illusion have been revived by a growing body of empirical and experimental evidence since the mid-1990s, which prompted theoretical studies by Akerlof et al., 1996 and Akerlof et al., 2000 on the Phillips curve, Piazzesi and Schneider (2008) on housing market, and by Basak and Yan (2010) on investor behavior. In this paper, we extend the preference-based formulation of money illusion by Basak and Yan (2010) and incorporate this extension into an endogenous growth model. We study how the presence of money illusion affects the relationship between inflation and long-run economic growth. Endogenous growth is introduced by adopting the one-sector AK framework of Jones and Manuelli (1990) and Rebelo (1991). Money is introduced via the money-in-the-utility (MIU) function framework of Sidrauski, 1967a and Sidrauski, 1967b.3 We show that money illusion affects an agent's perception of the growth and riskiness of real wealth and hence distorts his consumption/savings decisions. Intuitively, real wealth includes real money balances. A money-illusioned agent values both real and nominal terms and hence both expected inflation and inflation uncertainty affect his decision rules. Our model is tractable and allows us to derive closed-form solutions. Yet, it is rich enough for calibration and quantitative assessments. We establish that the welfare cost of money illusion is second order, whereas the impact on long-run economic growth is first order in terms of the parameter that captures the degree of money illusion. When calibrating our model to the U.S. annual data from 1960 to 2006, we find that a small degree of money illusion, in the sense that the representative agent puts 5% weight on nominal quantities in utility evaluation, results in a negligible welfare loss of 0.06% of real income, whereas it lowers the rate of economic growth by a noticeable 0.11 percentage point. This result complements the one in Basak and Yan (2010),4 and is reminiscent of the Keynesian proposition that small deviations from rationality have small welfare losses, but can have a significant impact on economic outcomes (Akerlof, 2002, Akerlof and Yellen, 1985b and Mankiw, 1985). We show that in theory, the monetary authority can choose a growth rate of the money supply to eliminate the cost of money illusion by correcting the distortions on consumption/savings decisions. This monetary policy implements a specific nonzero expected inflation rate or a constant nominal interest rate such that the distortions arising from the agent's misperception of the growth and riskiness of real wealth offset each other. One may argue that money illusion should not persist in the long run as agents can learn. However, as argued by Shafir et al. (1997), money illusion arises in large part because it is considerably easier and more natural for individuals to think in nominal rather than in real terms. This tendency is likely to persist despite economists’ attempts to educate the public. Akerlof et al. (2000) use a variety of psychological evidence to argue that high inflation, not the passage of time, may dissipate money illusion. High inflation is salient so that people may take into account the difference between nominal and real values. Our quantitative results provide support for this psychological argument. We find that the welfare cost of money illusion is small for low inflation. It rises nonlinearly with the expected inflation rate and becomes large for high inflation. Our model can shed light on the growth and inflation relationship.5 While some researchers find evidence for a negative relationship (e.g., Barro, 1996 and Chari et al., 1995), other empirical studies show that this relationship is not robust (e.g., Bullard and Keating, 1995, Sarel, 1996, Bruno and Easterly, 1998, Dotsey and Sarte, 2000, Fischer et al., 2002 and Khan and Senhadji, 2001). We prove that this relationship depends on the representative agent's risk attitudes or the elasticity of intertemporal substitution.6 In particular, growth and inflation are negatively (positively) related if the degree of relative risk aversion is greater (less) than unity. They are independent if the degree of relative risk aversion is equal to unity. The rest of the paper is organized as follows. In Section 2, we survey the related literature and provide justification to our formulation. In Section 3, we study a MIU model of endogenous growth in the presence of money illusion. In Section 4, we analyze the quantitative effects of money illusion and discuss the monetary policy that eliminates the welfare cost of money illusion. We conclude in Section 5. Proofs and technical details are relegated to appendices.

In this paper, we have presented a tractable stochastic continuous-time monetary model of endogenous growth in which the representative agent suffers from money illusion. Our paper provides a first study on the relationship between money illusion and inflation as related to economic growth and policy. Our analysis has demonstrated that money illusion distorts an agent's perception of the growth and riskiness of real wealth and thus his consumption/savings choice. Its impact on long-run growth is via this channel. We have shown that the welfare cost of money illusion is second order, whereas its impact on long-run growth is first order in terms of the degree of money illusion. Our model has implications for the empirical relationship between growth and inflation. Our results suggest this relationship crucially depends on the risk aversion parameter. Our model can be varied in a number of dimensions. First, although we have shown in theory that the monetary authority can choose a growth rate of the money supply to eliminate the cost of money illusion by correcting the distortions on consumption/savings decisions, more needs to be done to study what procedures are required for an effective implementation. Second, we may introduce labor-leisure choice and consider a type of the Lucas (1988) human-capital model. Third, we may separate risk aversion and intertemporal substitution in the utility specification as in Epstein and Zin (1989). We can then analyze how they interact with money illusion in an agent's consumption/savings decision problem. Finally, we may use our modeling of money illusion to study price and wage rigidities in a multi-agent or multi-firm model. We can then examine business cycle implications.