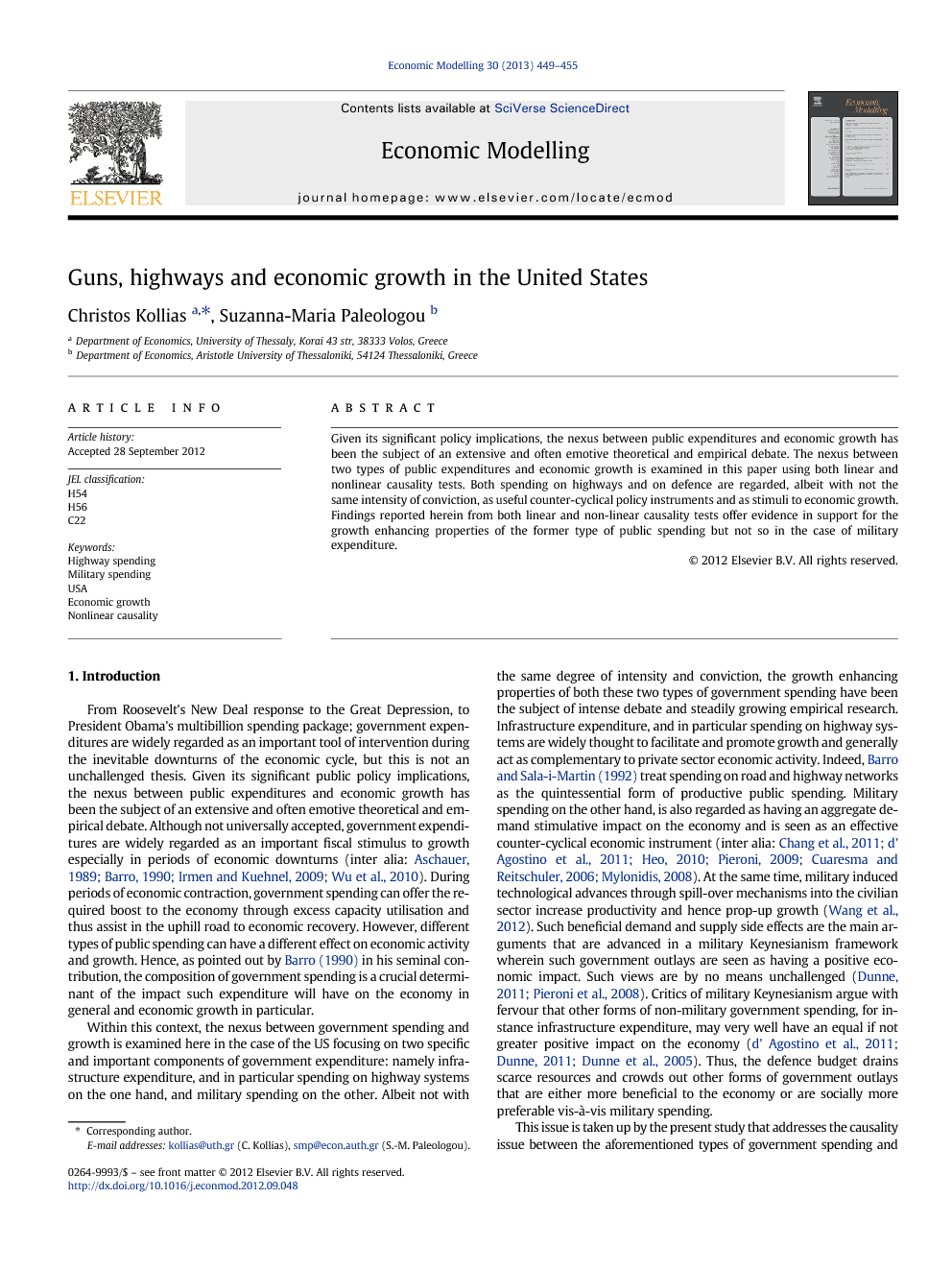 Given its significant policy implications, the nexus between public expenditures and economic growth has been the subject of an extensive and often emotive theoretical and empirical debate. The nexus between two types of public expenditures and economic growth is examined in this paper using both linear and nonlinear causality tests. Both spending on highways and on defence are regarded, albeit with not the same intensity of conviction, as useful counter-cyclical policy instruments and as stimuli to economic growth. Findings reported herein from both linear and non-linear causality tests offer evidence in support for the growth enhancing properties of the former type of public spending but not so in the case of military expenditure.

From Roosevelt's New Deal response to the Great Depression, to President Obama's multibillion spending package; government expenditures are widely regarded as an important tool of intervention during the inevitable downturns of the economic cycle, but this is not an unchallenged thesis. Given its significant public policy implications, the nexus between public expenditures and economic growth has been the subject of an extensive and often emotive theoretical and empirical debate. Although not universally accepted, government expenditures are widely regarded as an important fiscal stimulus to growth especially in periods of economic downturns (inter alia: Aschauer, 1989, Barro, 1990, Irmen and Kuehnel, 2009 and Wu et al., 2010). During periods of economic contraction, government spending can offer the required boost to the economy through excess capacity utilisation and thus assist in the uphill road to economic recovery. However, different types of public spending can have a different effect on economic activity and growth. Hence, as pointed out by Barro (1990) in his seminal contribution, the composition of government spending is a crucial determinant of the impact such expenditure will have on the economy in general and economic growth in particular. Within this context, the nexus between government spending and growth is examined here in the case of the US focusing on two specific and important components of government expenditure: namely infrastructure expenditure, and in particular spending on highway systems on the one hand, and military spending on the other. Albeit not with the same degree of intensity and conviction, the growth enhancing properties of both these two types of government spending have been the subject of intense debate and steadily growing empirical research. Infrastructure expenditure, and in particular spending on highway systems are widely thought to facilitate and promote growth and generally act as complementary to private sector economic activity. Indeed, Barro and Sala-i-Martin (1992) treat spending on road and highway networks as the quintessential form of productive public spending. Military spending on the other hand, is also regarded as having an aggregate demand stimulative impact on the economy and is seen as an effective counter-cyclical economic instrument (inter alia: Chang et al., 2011, d' Agostino et al., 2011, Heo, 2010, Pieroni, 2009, Cuaresma and Reitschuler, 2006 and Mylonidis, 2008). At the same time, military induced technological advances through spill-over mechanisms into the civilian sector increase productivity and hence prop-up growth (Wang et al., 2012). Such beneficial demand and supply side effects are the main arguments that are advanced in a military Keynesianism framework wherein such government outlays are seen as having a positive economic impact. Such views are by no means unchallenged (Dunne, 2011 and Pieroni et al., 2008). Critics of military Keynesianism argue with fervour that other forms of non-military government spending, for instance infrastructure expenditure, may very well have an equal if not greater positive impact on the economy (d' Agostino et al., 2011, Dunne, 2011 and Dunne et al., 2005). Thus, the defence budget drains scarce resources and crowds out other forms of government outlays that are either more beneficial to the economy or are socially more preferable vis-à-vis military spending. This issue is taken up by the present study that addresses the causality issue between the aforementioned types of government spending and economic growth in the case of the US. To the best of our knowledge, such a comparative causal analysis involving these two budgetary components has not been attempted before for the US. To this effect, both linear and nonlinear Granger causality tests are employed here. The use of nonlinear causality tests was prompted by the growing empirical evidence that suggests the existence of nonlinearities in GDP and the notion that government expenditures can potentially affect growth in a non-linear way as noted by Cuaresma and Reitschuler, 2004 and Cuaresma and Reitschuler, 2006. Thus, if non-linearities are involved, the power of the traditional Granger tests against nonlinear causal relations can be low, as demonstrated by Baek and Brock (1992), Hiemstra and Jones (1993) and Conway et al. (1997). Traditional Granger causality tests (Granger, 1988, Granger, 2003 and Granger and Newbold, 1974) might overlook a significant nonlinear relation between the two types of expenditures used in this paper and GDP growth. The nonlinear Granger causality test employed here is a modified version of Baek and Brock (1992) by Hiemstra and Jones (1994). This testing procedure is based on nonparametric estimators of temporal relations within and across time series. Nonparametric modelling of time series does not require an explicit model a priori. This may be particularly useful given that the range of nonlinear models is very wide and that there has not been sufficient experience accumulated to decide which of these models is most appropriate in empirical studies.

Given the recently available data from the US Congressional Budget Office on highway expenditures, this paper sets out to comparatively examine the nexus between this type of public spending and growth on the one hand, and military spending and growth on the other. Both types of government spending are regarded as effective counter-cyclical policy instruments and as having a stimulative effect, thus propping-up economic growth. The former, in Barro's (1990) categorisation of public spending between productive and non-productive, is widely regarded as the archetypal form of productive public expenditure (Barro and Sala-i-Martin, 1995). The latter, i.e. military spending, in a military Keynesianism context, is also regarded as having a positive impact on the economy through a number of different channels (d' Agostino et al., 2011 and Pieroni et al., 2008). Both linear and nonlinear causality tests were used to investigate the causal ordering between these two types of public spending and economic growth in the US. The nonlinear causality tests revealed bidirectional causality between highway expenditures and growth rates but not so in the case of military spending where a unidirectional nonlinear causal relationship was established running from growth to military spending. This finding was persistent for the whole sample period as well as the Cold War sub-period and is in line with findings reported in other studies (Dunne, 2011, Heo, 2010 and Smith and Tuttle, 2008). Despite the limitations of the approach adopted here (Dunne and Smith, 2010), the results reported herein indicate that military expenditure may prove to be less of an effective stimulus to the US economy in periods of economic downturns vis-à-vis spending on infrastructures such as highways with the concomitant beneficial spillovers for society. Nevertheless, more systematic scrutiny of the proposed approach for studying the interaction between growth and the two types of government spending, used here within the context of a structural model, may shed more light into the relationship between the variables concerned and thus yield statistically more robust findings. Such a methodology overcomes the inherent weaknesses of causality testing as argued by Dunne and Smith (2010) and therefore seems to be the natural step forward in comparatively examining in a more comprehensive manner the economic impact of the two types of public expenditures.