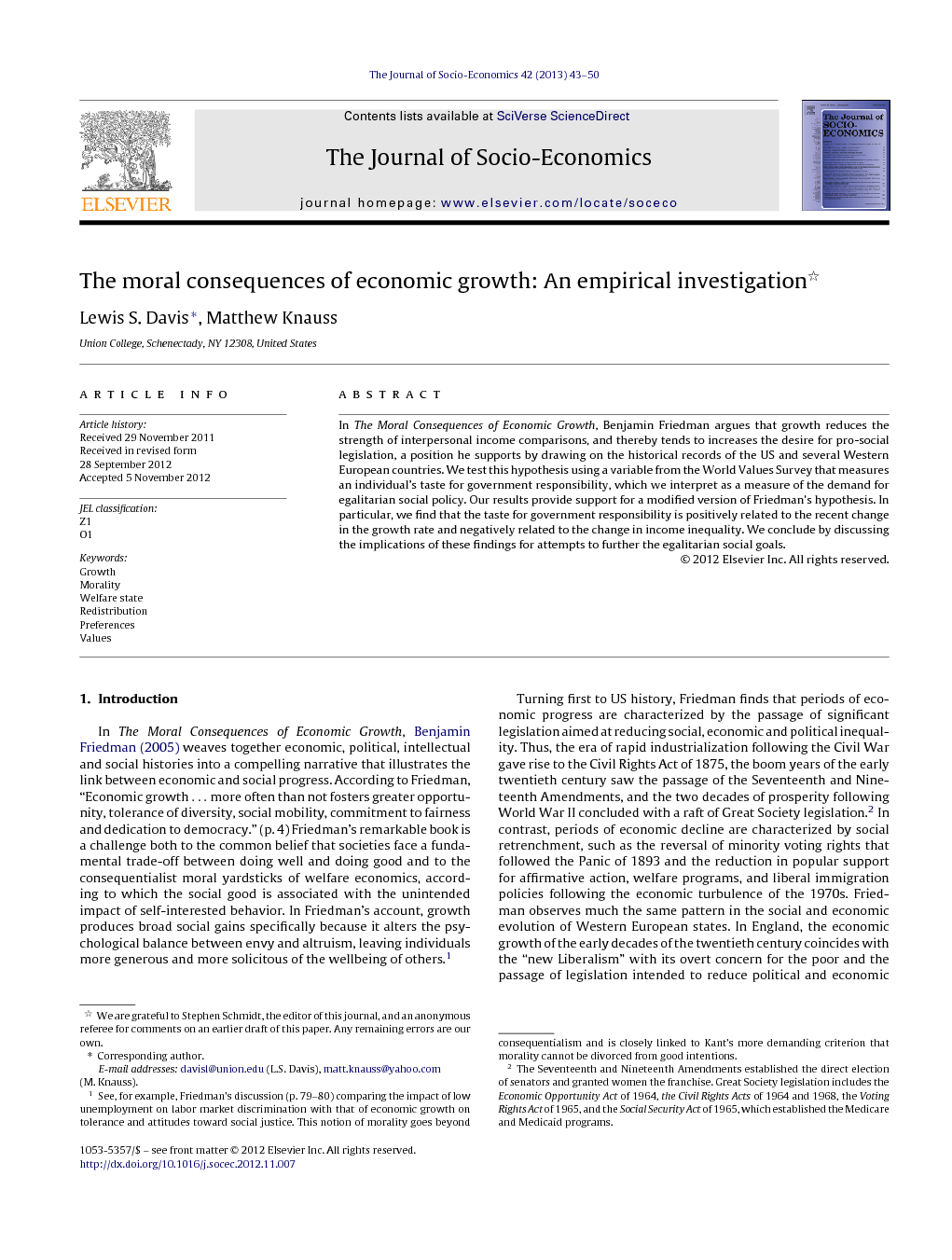 In The Moral Consequences of Economic Growth, Benjamin Friedman argues that growth reduces the strength of interpersonal income comparisons, and thereby tends to increases the desire for pro-social legislation, a position he supports by drawing on the historical records of the US and several Western European countries. We test this hypothesis using a variable from the World Values Survey that measures an individual's taste for government responsibility, which we interpret as a measure of the demand for egalitarian social policy. Our results provide support for a modified version of Friedman's hypothesis. In particular, we find that the taste for government responsibility is positively related to the recent change in the growth rate and negatively related to the change in income inequality. We conclude by discussing the implications of these findings for attempts to further the egalitarian social goals.

To the best of our knowledge, this is the first paper to test Friedman's claim that economic progress leads to social progress by increasing the demand for egalitarian social policy. Using data from the World Values Survey, we consider the relationship between economic growth and the taste for government responsibility in a panel of 84 countries. In addition to providing econometric evidence on the validity of Friedman's hypothesis, the use of a broad sample of countries allows us to consider the degree to which Friedman's hypothesis holds within a diverse set of countries from different regions and at different levels of development. Our findings do not support Friedman's claims that the taste for government responsibility is increasing in the rate of growth and decreasing in the level of inequality. Instead, we find support for a modified version of Friedman's hypothesis in which an increase in the rate of growth is positively related to the taste for government responsibility. This result is robust to a variety of controls and sample restrictions. An important exception is that the relationship between the change in growth and the taste for government responsibility is not significant when the sample is restricted to the richer countries. More evidence is required to determine whether this result reflects the weakness of the data we employ or a systematic relationship between a country's level of development and the determinants of individual preferences. Moreover, the interpretation of our results requires some caution, as we cannot rule out existence of bias due to unobserved heterogeneity at the country-level, and we cannot claim to have identified causal effects. Momentarily setting these caveats aside, it is worth considering the implications of our findings in the case that they do identify causal relationships. First, from a positive point of view, our results suggest that attempts to implement counter-cyclical macroeconomic policy may face significant resistance. For example, because recessions are characterized by a decline in economic growth, they will tend to be accompanied by a decrease in the taste for government responsibility and, thus, by a decrease in public support for counter-cyclical policies involving increased government spending. In contrast, the use of tax policy to stimulate aggregate demand may be more acceptable. This discussion suggests gains to the development of an institutionalized response to crises that by-passes legislative action. Second, our results suggest that the literature on the political economy of inequality might usefully be expanded to consider the roles of growth and inequality in the formation of policy preferences. In particular, the relationship between changes in income inequality and the taste for government responsibility might generate a feedback loop with the potential to exacerbate the effect of inequality shocks. For example, an exogenous increase in income inequality would tend reduce public support for redistributive public policies, leading to policy changes that further increase the level of income inequality. Such a pattern of self-reinforcing changes in inequality levels and redistributive policies could support multiple policy-inequality equilibria, such as Benabou (2000) and Benabou and Tirole (2006) argue exist for the US and Western Europe. Finally, from a normative point of view, the evidence presented here indicates a certain caution regarding the claim that economic progress can be expected to lead to social progress. While Friedman suggests that a permanent increase in the rate of economic growth would lead to an enduring increase in popular support for egalitarian social policy, our results indicate that the shift in public attitudes would characterized by a temporary rise, occurring directly following the rise to the higher rate of growth. Taken at face value, the evidence presented here indicates that to generate a sustained increase in support for egalitarian social policies, an accelerating growth rate would be necessary. Thus our analysis suggests that, in and of themselves, growth promoting policies may be a relatively blunt instruments for promoting social equality.