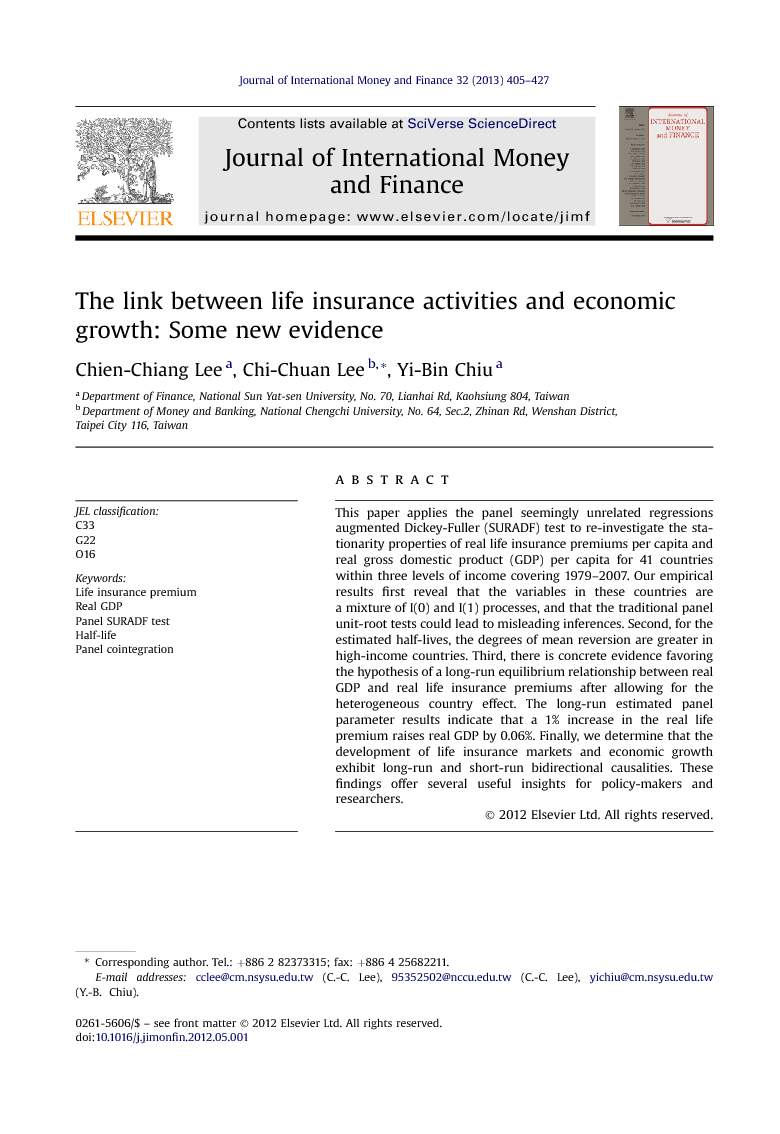 This paper applies the panel seemingly unrelated regressions augmented Dickey-Fuller (SURADF) test to re-investigate the stationarity properties of real life insurance premiums per capita and real gross domestic product (GDP) per capita for 41 countries within three levels of income covering 1979–2007. Our empirical results first reveal that the variables in these countries are a mixture of I(0) and I(1) processes, and that the traditional panel unit-root tests could lead to misleading inferences. Second, for the estimated half-lives, the degrees of mean reversion are greater in high-income countries. Third, there is concrete evidence favoring the hypothesis of a long-run equilibrium relationship between real GDP and real life insurance premiums after allowing for the heterogeneous country effect. The long-run estimated panel parameter results indicate that a 1% increase in the real life premium raises real GDP by 0.06%. Finally, we determine that the development of life insurance markets and economic growth exhibit long-run and short-run bidirectional causalities. These findings offer several useful insights for policy-makers and researchers.

This paper's techniques are econometrically a significant improvement over existing studies on the link between life insurance activities and economic growth. This paper adopts the panel SURADF unit-root test of Breuer et al. (2001, 2002) to re-examine 41 countries' life insurance premiums and real GDP within high-, middle-, and low-income panel sets following the classification criterion of the World Bank and covering 1979–2007. Our results illustrate that the per capita real insurance premiums and real GDP per capita in the sample countries are a mixture of I(0) and I(1) processes, and that the generally used panel root tests could lead to misleading inferences. For the persistence measures, the half-lives of real insurance premiums per capita tend to cluster in the range of 1.24–6.40 years among high-income level countries, or much slower than the range of 3.99–4.98 years among middle-income level countries. For real GDP per capita the half-lives in Italy and Japan are respectively 4.81 and 7 years. These results suggest that high-income countries' economies grow slower, which is consistent with the convergence hypothesis. The panel cointegration test results herein provide substantive evidence of a fairly strong long-run cointegration relationship between real GDP and real life insurance premiums. The long-run estimated panel regression parameter results indicate that a 1% increase in real life premium raises real GDP by 0.06%. Finally, the causality results signify that there is a positive bi-causal relationship between the level of economic activity and life insurance markets in the long-run. In this sense, a high level of economic growth leads to a high insurance premium level and vice versa. In high-income countries, there seems to be a tendency to depend on insurance markets and that a sufficiently large amount of insurance activity seems to ensure a higher level of economic growth. This paper provides an empirical justification for strengthening both the insurance market and economic development. First, to achieve sustainable economic growth, it is advantageous to further reform the insurance market in order to improve information flow and to enhance competition. Second, to take advantage of the positive interaction between insurance market activities and economic growth, authorities should liberalize the economy while liberalizing the insurance sector – that is to say, strategies that promote development in the real economy should also be emphasized (Calderon and Liu, 2003 and Lee, forthcoming). If policy-makers wish to promote economic growth, they should focus attention on long-run policies – for example, the creation of modern financial institutions, i.e. banks, insurance firms, and so on, that will foster the most efficient allocation of resources through better risk management. Countries will benefit from strengthening their regulatory framework by creating a sound environment that facilitates insurance markets' development, which further stimulates economic growth.