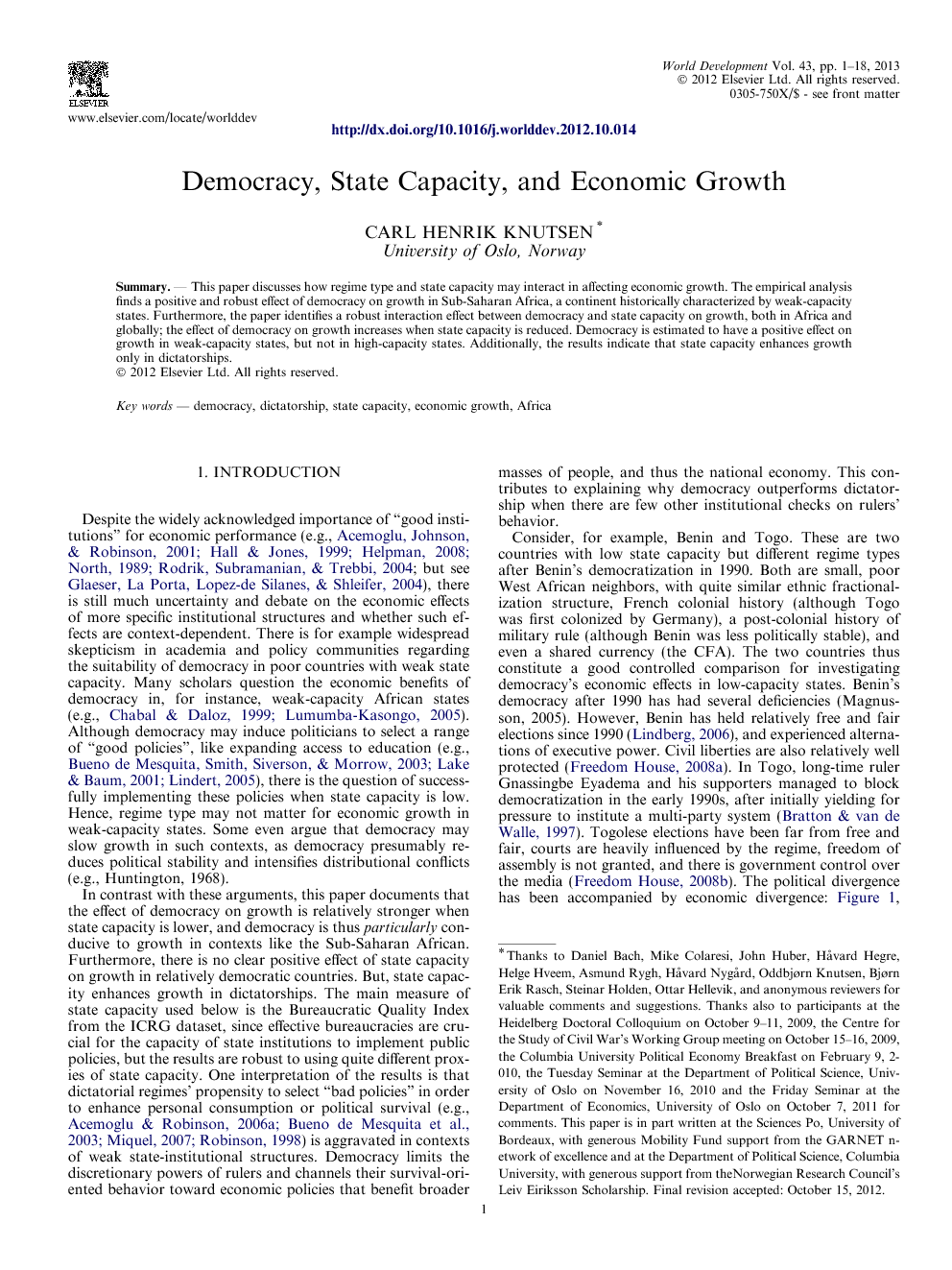 Despite the widely acknowledged importance of “good institutions” for economic performance (e.g., Acemoglu et al., 2001, Hall and Jones, 1999, Helpman, 2008, North, 1989 and Rodrik et al., 2004; but see Glaeser, La Porta, Lopez-de Silanes, & Shleifer, 2004), there is still much uncertainty and debate on the economic effects of more specific institutional structures and whether such effects are context-dependent. There is for example widespread skepticism in academia and policy communities regarding the suitability of democracy in poor countries with weak state capacity. Many scholars question the economic benefits of democracy in, for instance, weak-capacity African states (e.g., Chabal and Daloz, 1999 and Lumumba-Kasongo, 2005). Although democracy may induce politicians to select a range of “good policies”, like expanding access to education (e.g., Bueno de Mesquita et al., 2003, Lake and Baum, 2001 and Lindert, 2005), there is the question of successfully implementing these policies when state capacity is low. Hence, regime type may not matter for economic growth in weak-capacity states. Some even argue that democracy may slow growth in such contexts, as democracy presumably reduces political stability and intensifies distributional conflicts (e.g., Huntington, 1968). In contrast with these arguments, this paper documents that the effect of democracy on growth is relatively stronger when state capacity is lower, and democracy is thus particularly conducive to growth in contexts like the Sub-Saharan African. Furthermore, there is no clear positive effect of state capacity on growth in relatively democratic countries. But, state capacity enhances growth in dictatorships. The main measure of state capacity used below is the Bureaucratic Quality Index from the ICRG dataset, since effective bureaucracies are crucial for the capacity of state institutions to implement public policies, but the results are robust to using quite different proxies of state capacity. One interpretation of the results is that dictatorial regimes’ propensity to select “bad policies” in order to enhance personal consumption or political survival (e.g., Acemoglu and Robinson, 2006a, Bueno de Mesquita et al., 2003, Miquel, 2007 and Robinson, 1998) is aggravated in contexts of weak state-institutional structures. Democracy limits the discretionary powers of rulers and channels their survival-oriented behavior toward economic policies that benefit broader masses of people, and thus the national economy. This contributes to explaining why democracy outperforms dictatorship when there are few other institutional checks on rulers’ behavior. Consider, for example, Benin and Togo. These are two countries with low state capacity but different regime types after Benin’s democratization in 1990. Both are small, poor West African neighbors, with quite similar ethnic fractionalization structure, French colonial history (although Togo was first colonized by Germany), a post-colonial history of military rule (although Benin was less politically stable), and even a shared currency (the CFA). The two countries thus constitute a good controlled comparison for investigating democracy’s economic effects in low-capacity states. Benin’s democracy after 1990 has had several deficiencies (Magnusson, 2005). However, Benin has held relatively free and fair elections since 1990 (Lindberg, 2006), and experienced alternations of executive power. Civil liberties are also relatively well protected (Freedom House, 2008a). In Togo, long-time ruler Gnassingbe Eyadema and his supporters managed to block democratization in the early 1990s, after initially yielding for pressure to institute a multi-party system (Bratton & van de Walle, 1997). Togolese elections have been far from free and fair, courts are heavily influenced by the regime, freedom of assembly is not granted, and there is government control over the media (Freedom House, 2008b). The political divergence has been accompanied by economic divergence: Figure 1, showing Benin’s and Togo’s GDP per capita in constant US$ (measured in 2000 prices) from 1960 to 2008, illustrates how Benin has outgrown Togo after 1990.According to World Development Indicators (WDI) data, the divergence is even clearer for PPP-adjusted income: an average Beninese was 30% wealthier than a Togolese in 1990. In 2008, however, he or she was 77% wealthier. Also other indicators point to different development paths after 1990. For example, the population-share with access to “improved sanitation facilities” in Benin increased from 12% to 30% during 1990–2006, whereas in Togo the percentage-share sank from 13 to 12. The developments in Benin are arguably related to noticeable policy-changes after democratization; for example, policies on water supply and sanitation in rural areas shifted in 1992 from more centralized programs with lacking user participation toward more effective programs based on communal participation and decentralization of decision making (World Bank, 2004). Furthermore, the educational policies pursued in post-democratization Benin are contributing to better skilled cohorts currently entering the workforce. As one recent report stated: “[T]he expansion of access to basic education in Benin is an impressive example of what can be achieved in a resource-constrained country with relatively low levels of institutional and planning capacity, if there is sufficient political support to prioritise and resource a sector” (Engel, Cossou, & Ross, 2011, p. 5). Access to education for the broad masses—i.e., the children of the majority of voters—was rapidly expanded after 1990, expenditure per student has increased, unpopular school fees have been abolished, and several less costly policies and reforms encouraging enrollment and discouraging drop-out have been pursued (see Engel et al., 2011 and World Bank, 2004). Consequently, Benin’s gross secondary school enrollment ratio improved from 9% to 32% during 1990–2005, whereas the primary enrollment ratio doubled from 48% to 96% according to WDI data. Is Benin’s progress relative to Togo due to the former’s more democratic regime? If yes, do the positive economic effects of democracy hold more generally in low-capacity states? Below, I first discuss literatures on regime type, state capacity, and economic growth, and elaborate on potential interaction effects. I present an argument for why dictatorship is ill-suited for generating growth in weak-capacity states, with empirical illustrations from Africa. Thereafter, I conduct an empirical analysis which finds strong support for various empirical implications of the argument, for example that democracy enhances growth in Sub-Saharan Africa, a region characterized by low state capacity, and that democracy’s effect on growth is higher when state capacity is lower.

Can democracy contribute to economic development in countries with weak state-capacity, such as many African countries? Indeed, this study finds that African democracies outperform their dictatorial counterparts in terms of economic growth. Moreover, both within Africa and globally, democracy’s effect on growth is higher when level of state capacity is lower. The analysis above provided indications that democracy may mitigate what is traditionally considered an economic advantage of autocracies, the propensity to accumulate physical capital (Przeworski & Limongi, 1993), in low-capacity states. Another, and more robust, result is that the “democracy-advantage” in enhancing human capital (Lake & Baum, 2001) is further strengthened when state capacity is low. At least until recent years, one “conventional wisdom” in many academic and policy communities was that democracy is unsuitable in poor countries and countries where state institutions are weak; democracy might induce political instability and short-sighted economic management, and intensify redistributive conflicts (e.g., Huntington, 1968). This is reflected also in the Africa-specific literature; democracy may either exacerbate economic problems, for example related to clientilistic practices, or simply do not matter much for economic performance on the continent (e.g., Chabal & Daloz, 1999). In the political-economic literature, the lack of robust statistical results have also made many researchers question whether there is any positive effect of democracy on growth (e.g., Przeworski et al., 2000). Some scholars have responded by arguing that state capacity, rather than regime type, is the key political variable in terms of affecting economic development (e.g., Leftwich, 2000; Fukuyama, 2005 and Kohli, 2004) Others have responded by investigating whether the effect of regime type on growth is contingent on other factors, such as electoral system in democracies (e.g., Persson & Tabellini, 2006) or existence of parties or legislatures in dictatorships (e.g., Gandhi, 2008 and Wright, 2008). This paper could be considered an extension of the latter literature, as it highlights the contingent effect of regime type on growth. However, the paper also speaks to the other literatures mentioned: The hypothesis that state capacity is a strong determinant of growth is backed up by plausible arguments, but has not been put to the same kind of stringent testing as the effect of democracy on growth has. The results presented here indicate the effect of state capacity may not be as unambiguous as often argued; importantly, state capacity seemingly matters far less for growth in democracies than in dictatorships. Finally, this paper’s results contrast starkly with the Africa-specific and more general literature arguing that democracy either inhibits or does not matter for economic performance in weak-capacity states. Rather, I propose that countries with low state capacity are in particular need of democratic institutions, in order to provide a minimum of constraints on and incentivize rulers to steer their policies toward productive public-goods provision and decent economic management. Left unconstrained, dictators in pursuit of staying in office or pocketing private wealth often wreak havoc to their economies. This is likely an important explanation for why so many African countries have experienced such miserable economic fortunes. Luckily, as indicated by the histories of Botswana and Mauritius, African and other low-capacity states can prosper if they switch to more accountable forms of government. In the longer run, state capacity may be endogenous to economic growth and regime type (e.g., Acemoglu et al., 2011, Besley and Persson, 2009, Besley and Persson, 2010 and Charron and Lapuente, 2010). For example, rulers in dictatorial regimes may in some instances have incentives to build down the quality of state bureaucracies and capacity of state institutions gradually (Acemoglu et al., 2011), thus exacerbating the negative effects of dictatorship over time. The literature on African political economies suggests rulers may have interests in “informalizing politics” (e.g., Chabal and Daloz, 1999 and Jackson and Rosberg, 1982), as this may enhance the ruler’s personal consumption and chances of political survival. However, whether such incentives exist may depend on different factors; Besley and Persson (2009), for example, highlight how ruling actors’ investments in state capacity may depend on prospects of interstate war. In the presence of grave external security threats, dictatorial elites may appreciate the need for strong states, economies, and armies ( Knutsen, 2011b). Furthermore, rulers’ abilities to debase the capacity of state institutions could depend on initial level of state capacity not being too high; when state bureaucracies are strong and autonomous they may resist attempts from rulers to alter their structures. If so, one could expect a long-run “multiple-equilibrium scenario” where state capacity either is relatively high or very low in dictatorships. Hence, the long-run dynamics of the regime type–state capacity–economic growth nexus, and its complexities, need to be explored in further detail.