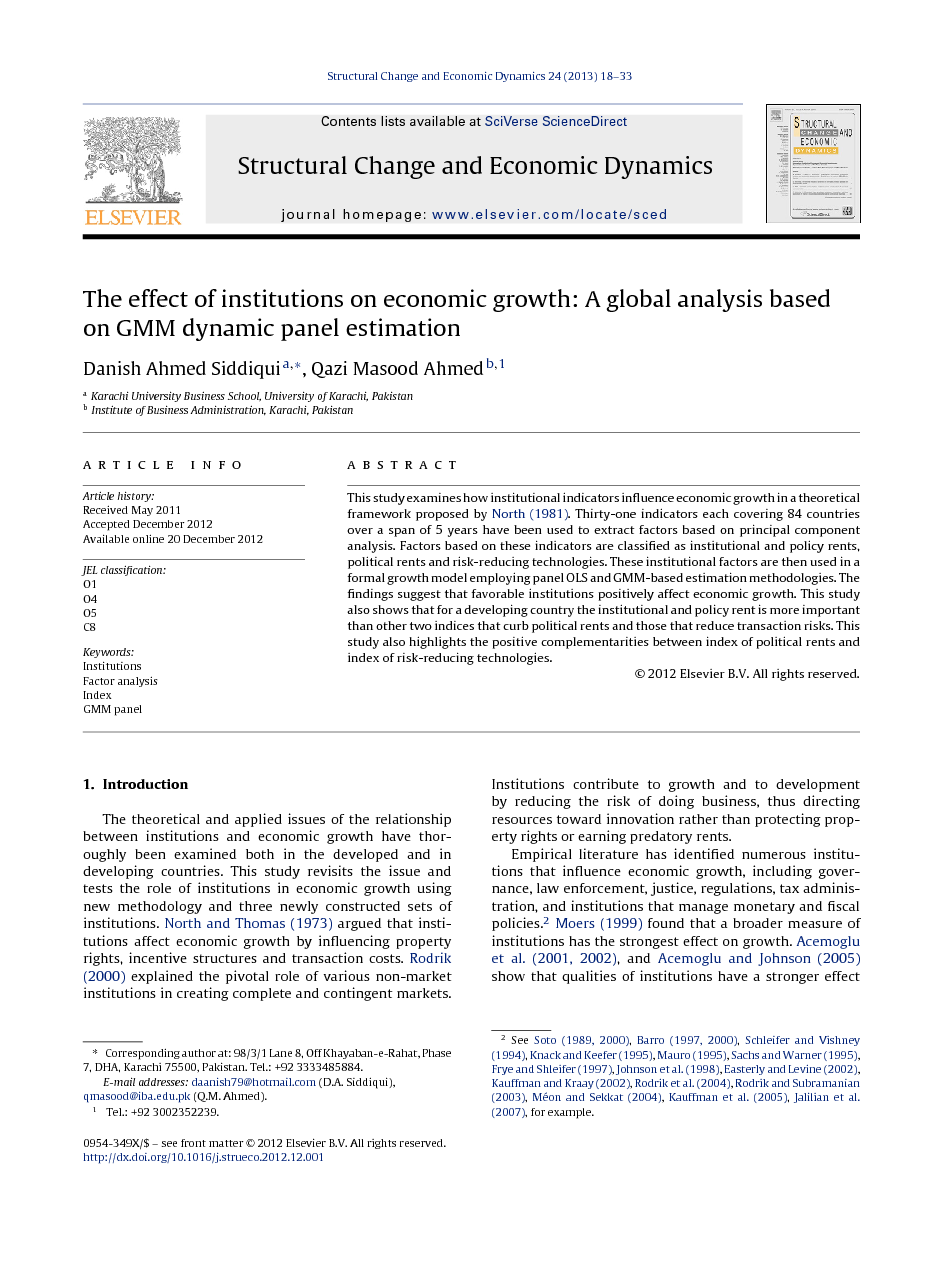 This study examines how institutional indicators influence economic growth in a theoretical framework proposed by North (1981). Thirty-one indicators each covering 84 countries over a span of 5 years have been used to extract factors based on principal component analysis. Factors based on these indicators are classified as institutional and policy rents, political rents and risk-reducing technologies. These institutional factors are then used in a formal growth model employing panel OLS and GMM-based estimation methodologies. The findings suggest that favorable institutions positively affect economic growth. This study also shows that for a developing country the institutional and policy rent is more important than other two indices that curb political rents and those that reduce transaction risks. This study also highlights the positive complementarities between index of political rents and index of risk-reducing technologies.

Institutions undoubtedly are important for economic growth but earlier studies have not exposed which institutions matter the most and how they affect growth. This study investigated the same issue by using larger datasets and more robust techniques. It presented an Index of Institutionalized Social Technologies for the period 2002–2006 along with its sub-indices (Institutional and policy rents, political rents and risk reducing institutions), as measures of institutions. These indices captured institutions’ effects on growth in a formal model along with variables such as human capital, savings, and trade openness. It also factored in initial conditions to measure signs of convergence. Overall results of dynamic panel difference estimation and panel OLS estimations suggest that institutions exert a large and positive influence on economic growth. We found evidence that institutions of Institutional and policy rents (RiiF1) substantially influence long-run economic growth, whereas institutions that reduce risk and inhibit political rent (SiiF3 and RpiF2) were not statistically significant in some cases. A similar conclusion is reached by Acemoglu and Johnson (2005). They argue that in the absence of formal risk-reducing institutions, informal arrangements develop to provide protection in their place. As in earlier times, when formal institutions like courts and police did not exist or were ineffective, people resorted to living in groups where contracts are honored through informal pressure and risk of expulsion from the group. Hence, their rights are secured in other ways. Otherwise, protection from rent-seeking behavior would depend only upon the behavior of the State toward its people. If government's behavior promotes corruption, inefficiency, or predatory rents for privileged classes then all those people who do not have a level playing field cannot enter into similar contracts, and this would largely diminish long-run growth prospects. When all institutional measures were combined in one index, the effects on growth were more pronounced, which revealed a high degree of complementarity among institutions generally and between the institutions that protect property rights and those that inhibit political rent seeking, particularly. As political institutions improve, the measures such as improvement in law and order conditions would yield immediate results in the form of economic development. Other control variables showed that human capital, savings, and international trade have significant influence on growth as theory predicts. The results also confirm the conditional convergence predicted in modern theories of growth. From the policy perspective the emphasis should be given to the strengthening of all forms of institutions. Elimination of corruption and bureaucratic inefficiencies and provision of competitive market systems may promote economic prosperity but relying only on risk-reducing institutions for that purpose may not be very fruitful. Nonetheless, enforcing law and order and strengthening justice systems would be effective only if supported by strengthening political rights, competition and civil liberties.