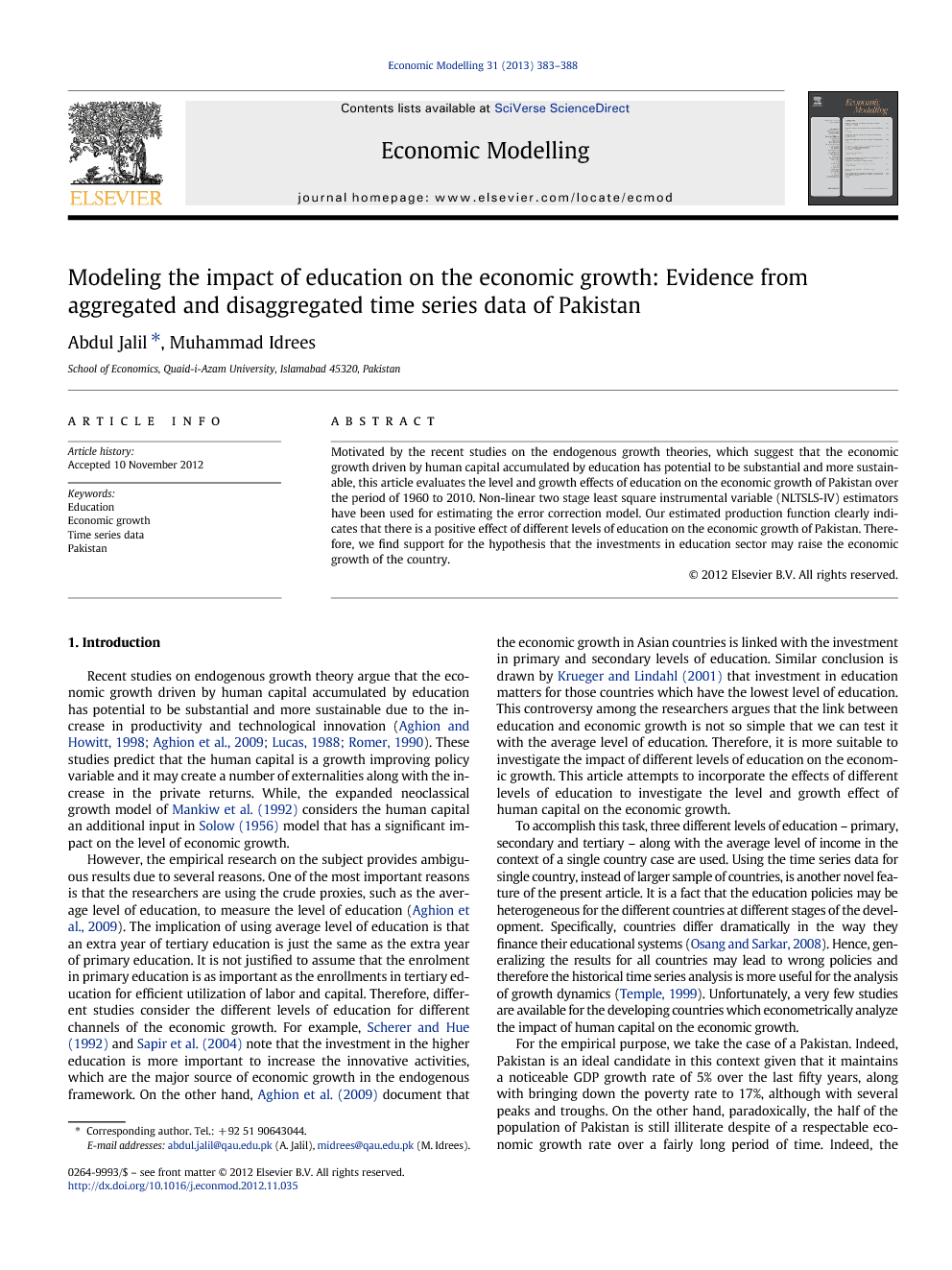 Recent studies on endogenous growth theory argue that the economic growth driven by human capital accumulated by education has potential to be substantial and more sustainable due to the increase in productivity and technological innovation (Aghion and Howitt, 1998, Aghion et al., 2009, Lucas, 1988 and Romer, 1990). These studies predict that the human capital is a growth improving policy variable and it may create a number of externalities along with the increase in the private returns. While, the expanded neoclassical growth model of Mankiw et al. (1992) considers the human capital an additional input in Solow (1956) model that has a significant impact on the level of economic growth. However, the empirical research on the subject provides ambiguous results due to several reasons. One of the most important reasons is that the researchers are using the crude proxies, such as the average level of education, to measure the level of education (Aghion et al., 2009). The implication of using average level of education is that an extra year of tertiary education is just the same as the extra year of primary education. It is not justified to assume that the enrolment in primary education is as important as the enrollments in tertiary education for efficient utilization of labor and capital. Therefore, different studies consider the different levels of education for different channels of the economic growth. For example, Scherer and Hue (1992) and Sapir et al. (2004) note that the investment in the higher education is more important to increase the innovative activities, which are the major source of economic growth in the endogenous framework. On the other hand, Aghion et al. (2009) document that the economic growth in Asian countries is linked with the investment in primary and secondary levels of education. Similar conclusion is drawn by Krueger and Lindahl (2001) that investment in education matters for those countries which have the lowest level of education. This controversy among the researchers argues that the link between education and economic growth is not so simple that we can test it with the average level of education. Therefore, it is more suitable to investigate the impact of different levels of education on the economic growth. This article attempts to incorporate the effects of different levels of education to investigate the level and growth effect of human capital on the economic growth. To accomplish this task, three different levels of education – primary, secondary and tertiary – along with the average level of income in the context of a single country case are used. Using the time series data for single country, instead of larger sample of countries, is another novel feature of the present article. It is a fact that the education policies may be heterogeneous for the different countries at different stages of the development. Specifically, countries differ dramatically in the way they finance their educational systems (Osang and Sarkar, 2008). Hence, generalizing the results for all countries may lead to wrong policies and therefore the historical time series analysis is more useful for the analysis of growth dynamics (Temple, 1999). Unfortunately, a very few studies are available for the developing countries which econometrically analyze the impact of human capital on the economic growth. For the empirical purpose, we take the case of a Pakistan. Indeed, Pakistan is an ideal candidate in this context given that it maintains a noticeable GDP growth rate of 5% over the last fifty years, along with bringing down the poverty rate to 17%, although with several peaks and troughs. On the other hand, paradoxically, the half of the population of Pakistan is still illiterate despite of a respectable economic growth rate over a fairly long period of time. Indeed, the educational sector has undergone the significant reforms in the recent years and the literacy rate rises from 10% to 53% over the period of 1950 to 2010. It is also equally important to mention that the expenditure on education as a percentage of GDP is the lowest as compared to other emerging economies in the region. While Behrman (1995) estimates that the returns to expanding years of education in Pakistan are 20%. Similarly, Shabbir (1994) estimates the social rate of return of 13% for reinvestment in primary school. This implies that the assets may be doubled within six years. Birdsall et al. (1993) also notes that the income of Pakistan in 1985 would have been 25% higher if Pakistan had primary enrolment rate of 67%. Husain (2005) documents that the income of Pakistan may be double than the actual if we extend these projections to 2005. The results of these studies indicate that Pakistan misses economic returns by not properly increasing the investment in the education sector. However, look at Fig. 1. It is evident that expenditure on education has never been higher than 2.5% of GNP over the last four decades. Ironically, the expenditure on education as a percentage of GNP is decreasing for the last four or five years.1 Therefore, this article intends to motivate the policy makers for mobilizing the available resources in the education sector of Pakistan. To the best of our knowledge, there is none for Pakistan which uses a historical series of disaggregated data of education to investigate both level and growth effect of human capital on the economic growth. The present article is an attempt to fill this gap.The rest of the article is distributed into five main sections. Section 2 provides a brief literature review on the subject. The model and econometric strategy are discussed in Section 3. The construction of variables and data sources is presented in Section 4. The empirical results have been reported in Section 5, and finally in Section 6 conclusions have been drawn.

This article takes the first step, motivated by the recent developments in the endogenous growth theories which document the important role of education on the economic growth, in estimating the impact of different levels of education on the economic growth of Pakistan. Specifically, we evaluate the level and growth effect of education on the economic growth of Pakistan over the period of 1960 to 2010. Education was measured at three levels: primary, secondary and tertiary. This work uses the non-linear two stage instrumental variable estimator for estimating the error correction model which is based on the Hendry's (1995) concept of general-to-specific modeling. We clearly find that education has a positive impact on the economic growth of Pakistan. The result is also robust to the inclusion of primary, secondary and tertiary education as separate regressors in the growth equation. Therefore, we support the hypothesis that the investments in education sector raise the economic growth. The coefficients for the different levels of education suggest to researchers the use of disaggregate education data in order to get the factual effects of education on economic growth. Only using the average level of education, the aggregate measure of education, is likely to cause the aggregation bias. Importantly, this disaggregated analysis will provide better guidance to policy makers in order to mobilize the public expenditure in the specific level of education. In a nutshell, the outcome of this paper provides a reasonable support for the policy of investing in educational activities along with the accumulation of physical capital. Pakistan will need to maintain her investment in both physical and human capital now and in the coming years in order to achieve industrial level of development. Specifically, the positive and significant coefficient for all levels of the coefficient suggests that the country, like Pakistan, which has a limited social resources for human capital should allocate all levels of education for the better performance of the economy.