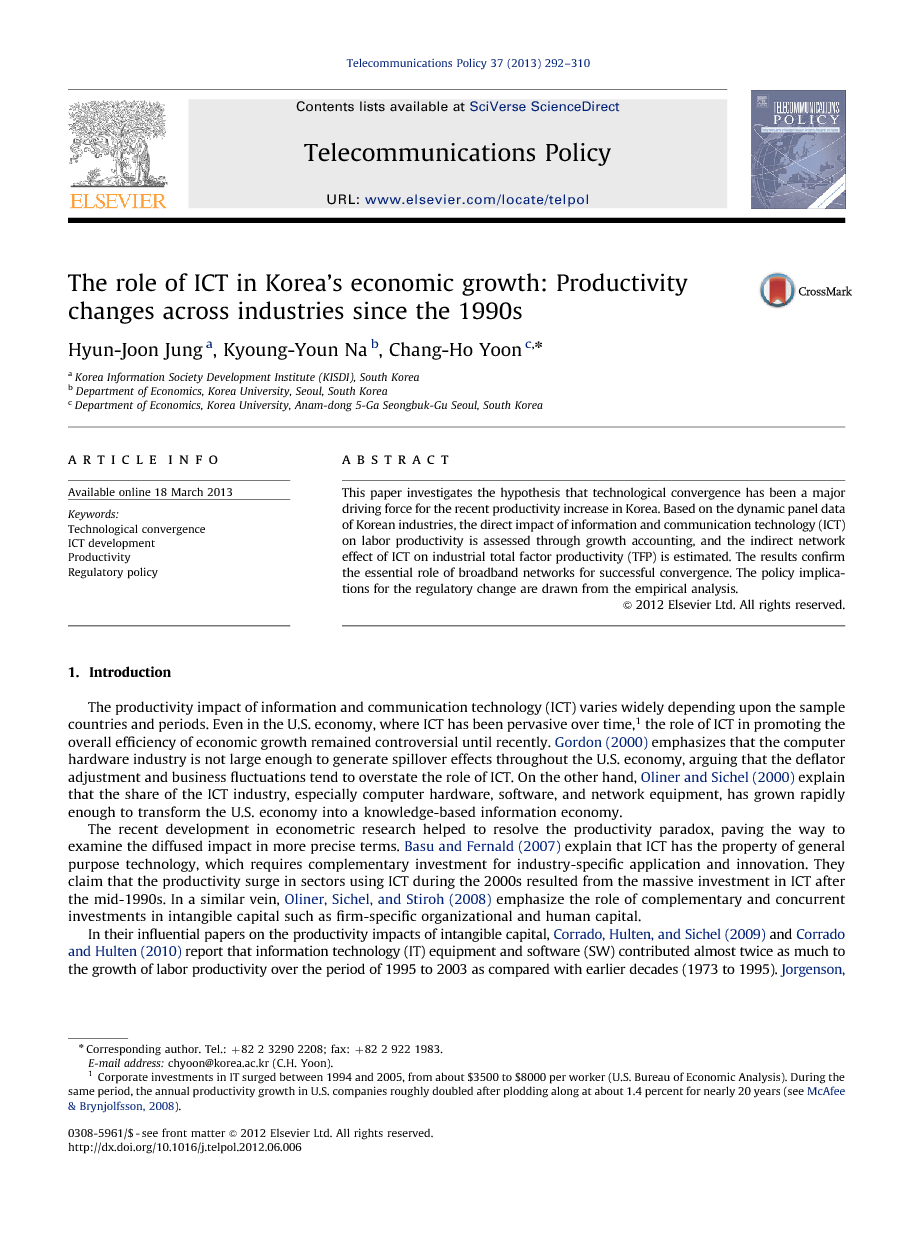 This paper investigates the hypothesis that technological convergence has been a major driving force for the recent productivity increase in Korea. Based on the dynamic panel data of Korean industries, the direct impact of information and communication technology (ICT) on labor productivity is assessed through growth accounting, and the indirect network effect of ICT on industrial total factor productivity (TFP) is estimated. The results confirm the essential role of broadband networks for successful convergence. The policy implications for the regulatory change are drawn from the empirical analysis.

The productivity impact of information and communication technology (ICT) varies widely depending upon the sample countries and periods. Even in the U.S. economy, where ICT has been pervasive over time,1 the role of ICT in promoting the overall efficiency of economic growth remained controversial until recently. Gordon (2000) emphasizes that the computer hardware industry is not large enough to generate spillover effects throughout the U.S. economy, arguing that the deflator adjustment and business fluctuations tend to overstate the role of ICT. On the other hand, Oliner and Sichel (2000) explain that the share of the ICT industry, especially computer hardware, software, and network equipment, has grown rapidly enough to transform the U.S. economy into a knowledge-based information economy. The recent development in econometric research helped to resolve the productivity paradox, paving the way to examine the diffused impact in more precise terms. Basu and Fernald (2007) explain that ICT has the property of general purpose technology, which requires complementary investment for industry-specific application and innovation. They claim that the productivity surge in sectors using ICT during the 2000s resulted from the massive investment in ICT after the mid-1990s. In a similar vein, Oliner, Sichel, and Stiroh (2008) emphasize the role of complementary and concurrent investments in intangible capital such as firm-specific organizational and human capital. In their influential papers on the productivity impacts of intangible capital, Corrado, Hulten, and Sichel (2009) and Corrado and Hulten (2010) report that information technology (IT) equipment and software (SW) contributed almost twice as much to the growth of labor productivity over the period of 1995 to 2003 as compared with earlier decades (1973 to 1995). Jorgenson, Ho, and Stiroh (2008) estimate the contribution of ICT to labor productivity growth in the U.S. economy2 and claim that productivity growth has been extended to both non-ICT and ICT-using sectors. In contrast to earlier research using data from the 1990s, ICT-producing industries show a smaller increase in TFP than industries that use ICT.3 The positive impact of ICT on productivity growth is not limited to the U.S. economy. As the price of sophisticated ICT equipment and SW became more affordable, the diffusion process accelerated over time in most developed economies. Technological convergence between ICT and other industrial technologies has been further stimulated by the convergence of ICT technologies (ICT convergence) such as the mobile Internet.4 The rapid expansion of broadband Internet and mobile infrastructure brings forth network economies and mediates ICT applications across various segments of the growing economy. Moreover, once the technological convergence strengthens the competitiveness of sectors that use ICT, the demand for ICT-intensive investment goods grows, building a virtuous circle of cumulative effects between the two sectors.5 According to the OECD report,6 Korea has built extensive broadband Internet networks and become one of the leading countries in ICT development. Over the past decade, the average GDP and export share of ICT-producing industries in Korea amounted to 8 and 35 percent, respectively. Although Korea’s growth rate decreased from 8 to 4 percent per annum after the financial crises starting in the late 1990s, the leading export industries such as automobile, shipbuilding, steel products, and chemicals, not to mention the ICT-producing industries such as semiconductors and mobile handset equipment, have greatly strengthened their international competitiveness in the past decade. In the absence of an underlying driving force that stimulates technological convergence and a productivity increase, such a gain in international competitiveness might not have been realized during the mid-2000s when the Korean won appreciated substantially against the Japanese yen and U.S. dollar threatening export markets. The Korean government recently began to acknowledge the importance of ICT diffusion and technological convergence. The government announced the so-called Future Strategy for IT Korea, which coordinates the ICT policy directives of the Ministry of Knowledge and Economics and Korea Communications Commission. It outlines a set of candidate industries that will benefit the most from technological convergence, emphasizing the role of the software industry as a vehicle for industrial competitiveness. The policy priority also includes the security and speed of Internet service. 7 The shift of the policy directive from the network infrastructure to the application of ICT, however, is likely to bring important changes in the regulatory regime of the network industry and requires a comprehensive assessment of the source and impact of technological convergence. In the current paper, the authors estimate the determinants and impacts of technological convergence using the industry panel data of Korea starting in the late 1990s, when Korea launched both its stabilization policy and structural adjustment process to overcome financial turmoil. Despite financial difficulties in the 1990s, Korea managed to invest heavily in ICT infrastructure to build a dynamic comparative advantage for the coming decades.8 The success of such a policy mix was bound to be dependent on the broad, efficient diffusion of ICT throughout the economy. This paper begins with an explanation of the concept of technological convergence and recent examples of ICT applications in the automobile and shipbuilding industries. These examples illustrate the important role of the network infrastructure in technological convergence. This paper then assesses the productivity growth across industries through growth accounting and finds that the capital deepening of ICT equipment and SW has positively impacted labor productivity in Korea. The spillover effect of ICT development is examined through its impact on TFP growth. The sensitivity analysis confirms that the TFP growth of industries that use ICT is favorably affected by technological convergence. In the final section, the authors present the concluding remarks and draw policy implications.

This paper has examined the concept of technological convergence, explaining how it enhances industrial productivity. After providing examples of technological convergence in ICT-using industries, this paper examines the impact of ICT on labor productivity in both ICT-using and ICT-producing sectors between the 1990s and 2000s. The growth accounting shows that the contribution of ICT, especially SW capital, to labor productivity growth has increased over time. The sensitivity analysis, which takes into account the productivity influences of human capital and the export environment, confirms the significant spillover effects of ICT on TFP growth. Although the analysis in the current paper depends on a sample period that ends in 2007 and does not cover the period after the global financial crisis, the results confirm that the network infrastructure produces strong externalities through technological convergence. Korea was one of the forerunners in introducing facility-based competition in the telecommunications market in the 1990s. As a result, Korea has managed to build premier mobile and broadband networks that connect virtually all households and industries. The broadband policy to build a nationwide quality network seems to have worked as a vehicle for technological convergence and has laid the foundation for technology-led growth in the ensuing decades. The telecommunications industry in Korea is now liberalized. Dominant operators are privatized and own both mobile and fixed networks offering a variety of packaged services. A large number of vendors manage to compete with dominant operators at various segments of the media markets, which have been growing rapidly after liberalization.36 The competitive process is monitored by the competition authority (the Korea Fair Trade Commission), while the traditional regulatory agency (the Korea Communications Commission) intervenes in pricing, licensing, and spectrum allocation. The two agencies reached an agreement on the proper division of regulatory roles in 2008 (Yoon & Jung, 2011). In addition, the Ministry of Knowledge and Economics is responsible for industrial policy to facilitate diffusion of ICT and technological convergence. Compared to the early phase of broadband development, the regulatory system has become more fragmented. Unlike the previous Broadband Convergence Network (BCN) project which was led by the national government, private incentives for investment and innovation through facility-based competition are likely to lead broadband development in Korea in the future. The Korean government has recently promulgated a new strategy for IT development that emphasizes the need to build social potential for technological convergence. The government has presented a persuasive vision for coordinated investments in SW, system semiconductors, mobile Internet, and cloud computing technology, all of which are expected to enhance the global competitiveness of traditional industries such as shipbuilding, automobile, machinery, chemicals, and textile industries. The results of the present paper indicate that successful convergence requires both industry-specific ICT capital and broadband network infrastructure, while private entrepreneurial incentives to accumulate industry-specific ICT capital depend on the availability of a high-quality information network. A new strategy for IT development needs to be based on the economic assessment of traffic requirements for technological convergence and must include incentives to invest in the future need for premier networks. The regulatory authorities of the telecommunications industry must coordinate their efforts to resolve issues related to Internet pricing and network neutrality, as these may deteriorate the investment incentives of telecom operators to enhance the broadband infrastructure. Although technological convergence seems to have taken place in recent decades, the growth accounting of the current paper indicates relatively slow growth of the ICT-producing sector in recent years. The recent slow-down in the ICT-producing industry is likely to reduce the efficiency of technological convergence and can burden the rest of the economy in the long run. It would be an interesting extension of the current research to examine the role of ICT in Korea after the global financial crisis and to reassess the impact of ICT during the recent global recession.