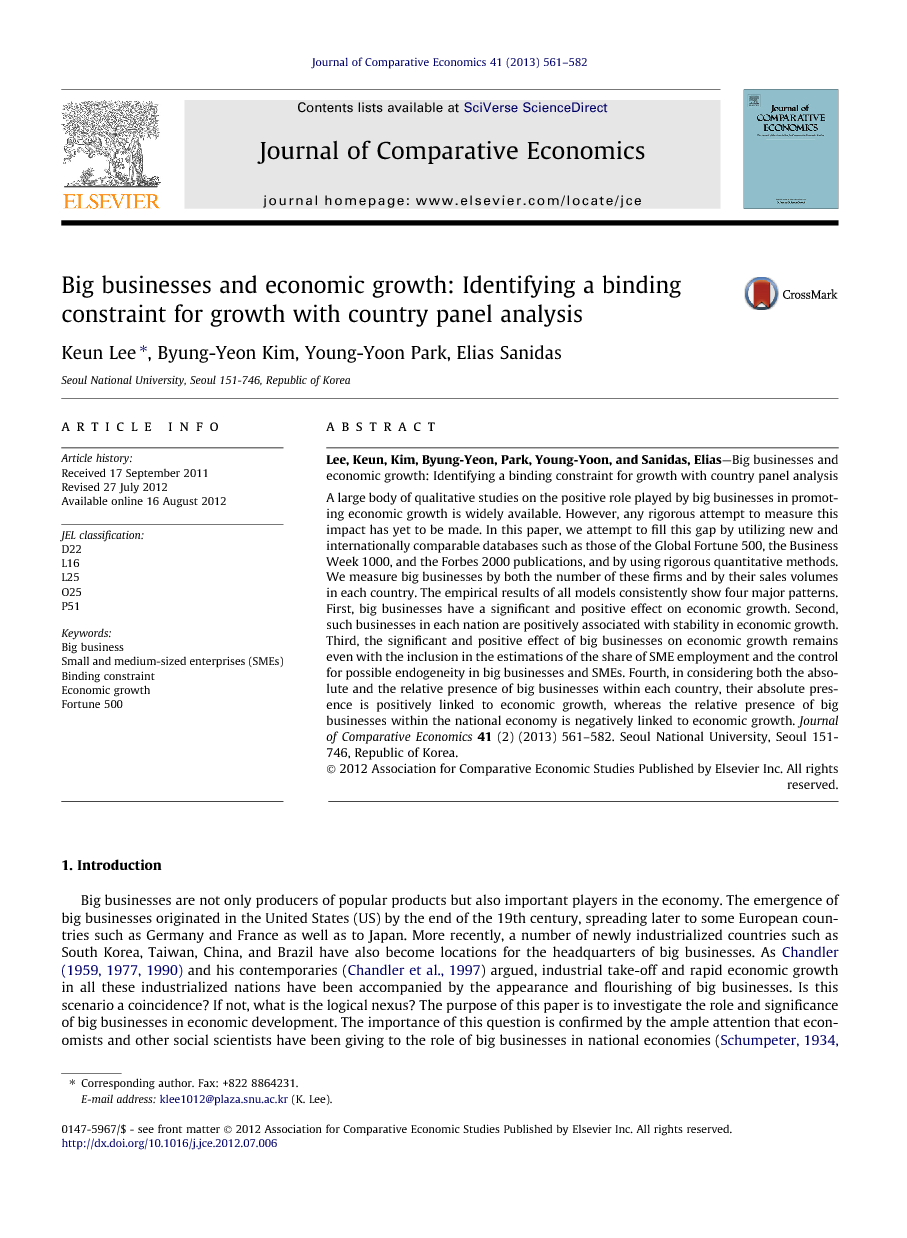 Big businesses are not only producers of popular products but also important players in the economy. The emergence of big businesses originated in the United States (US) by the end of the 19th century, spreading later to some European countries such as Germany and France as well as to Japan. More recently, a number of newly industrialized countries such as South Korea, Taiwan, China, and Brazil have also become locations for the headquarters of big businesses. As Chandler, 1959, Chandler, 1977 and Chandler, 1990 and his contemporaries (Chandler et al., 1997) argued, industrial take-off and rapid economic growth in all these industrialized nations have been accompanied by the appearance and flourishing of big businesses. Is this scenario a coincidence? If not, what is the logical nexus? The purpose of this paper is to investigate the role and significance of big businesses in economic development. The importance of this question is confirmed by the ample attention that economists and other social scientists have been giving to the role of big businesses in national economies (Schumpeter, 1934, Schumpeter, 1942, Kozul-Wright and Rowthorn, 1998, Pagano and Schivardi, 2003, Blackford, 1998, Cassis, 1997, Wardley, 1991 and Fogel et al., 2008). The literature on the determinants of economic growth and development is massive, and many factors or variables have been suggested theoretically and empirically. For example, Acemoglu et al., 2001, Acemoglu et al., 2002, Rodrik et al., 2004 and Rodrik, 1999, and Glaeser et al. (2004) analyzed factors such as the economic role of institutions, policies, domestic social conflicts, or geography. The purpose of the present study is not to enumerate and review the literature but to highlight some new directions. In response to the World Bank’s (2005) review of the economic growth experience around the globe in the 1990s, Rodrik (2006) emphasized the importance of identifying the “binding constraints” on growth. According to Rodrik, the most urgent task for economists is to undertake a diagnostic analysis to detect where the most significant constraints on economic growth are (and hence where the greatest return is). We follow Rodrik’s emphasis on “finding the binding constraints” as we examine the role of big businesses in economic growth.1 We claim that having or not having a certain number of big businesses is one of the important binding constraints that various nations are facing in their recent economic development, especially in countries that are presently in the so-called middle-income trap (World Bank, 2010 and Yusuf and Nabeshima, 2009).2 Whereas Hausmann et al. (2008) diagnosed specific binding constraints for each specific country, we think that such constraints can also be identified for groups of countries. One of the crucial differences between high- and middle-income countries might be that the latter lack the big businesses that can compete globally. We investigate the specific role of big businesses after controlling for usual variables in growth modeling such as capital, education, technology and small and medium enterprises (SMEs). In other words, we hypothesize that ignoring the significant role of big businesses in economic growth is similar to ignoring other “economic distortions whose removal would make the largest contribution to alleviating the constraints on growth …” (Hausmann et al., 2008, p. 331). This approach is also aligned with that by Lee and Kim (2009), who claimed that some factors are more important or more binding, depending on the stage of economic development. In the next section, we present the theoretical case for analyzing the contribution of big businesses to economic growth and contrast their role with that played by SMEs. We then gather systematic, empirical evidence on the roles that big businesses play for a large group of middle- and high-income countries. To the best of our knowledge, this approach to gathering and applying empirical evidence has not been carried out before in a rigorous and systematic way. Our empirical investigation uses internationally comparable data on big businesses for a range of relevant countries. The three main databases this paper draws on are the Fortune 500, Business Week 1000, and the Forbes 2000 surveys of the largest companies in the world. We apply panel data econometric techniques such as fixed effects (FE) and generalized method of moments (GMM). These techniques are necessary to control for endogeneity or two-way causality, because a priori, we cannot be certain whether big businesses cause national growth, or whether national growth causes big businesses to expand. We test a set of related hypotheses, which are as follows: (i) big businesses (represented by either their numbers or by their sales volumes) significantly contribute to a country’s per capita GDP growth; (ii) big businesses contribute to GDP stability; (iii) big businesses contribute to economic growth in a more robust and definite way than SMEs; and (iv) excessive reliance on big businesses hinders economic growth. In other words, we can verify that increases in the relative predominance of big businesses in a nation’s economy have negative implications for growth despite the positive link of expansion in the absolute size and number of big businesses to national growth and GDP stability. Such verification can be achieved by examining the effect of both the absolute and the relative presence of big businesses in each country. All the hypotheses are discussed in our theoretical considerations in the next section. This paper is organized as follows. Section 2 discusses several theoretical issues on the role of big businesses in economic growth. Section 3 explains the methodology of our analysis. Section 4 presents the data and variables. Section 5 discusses the main findings from the empirical investigation. Section 6 checks the robustness of our results with the use of additional control variables and deals with the issues of sample selection bias. This section also looks at the effect of SMEs compared with that of big businesses. Section 7 extends our discussion by focusing on the contribution of big businesses in stabilizing growth, and on the issues surrounding the absolute and relative presence of big businesses in a national economy. In Section 8, we present our conclusions and final remarks.