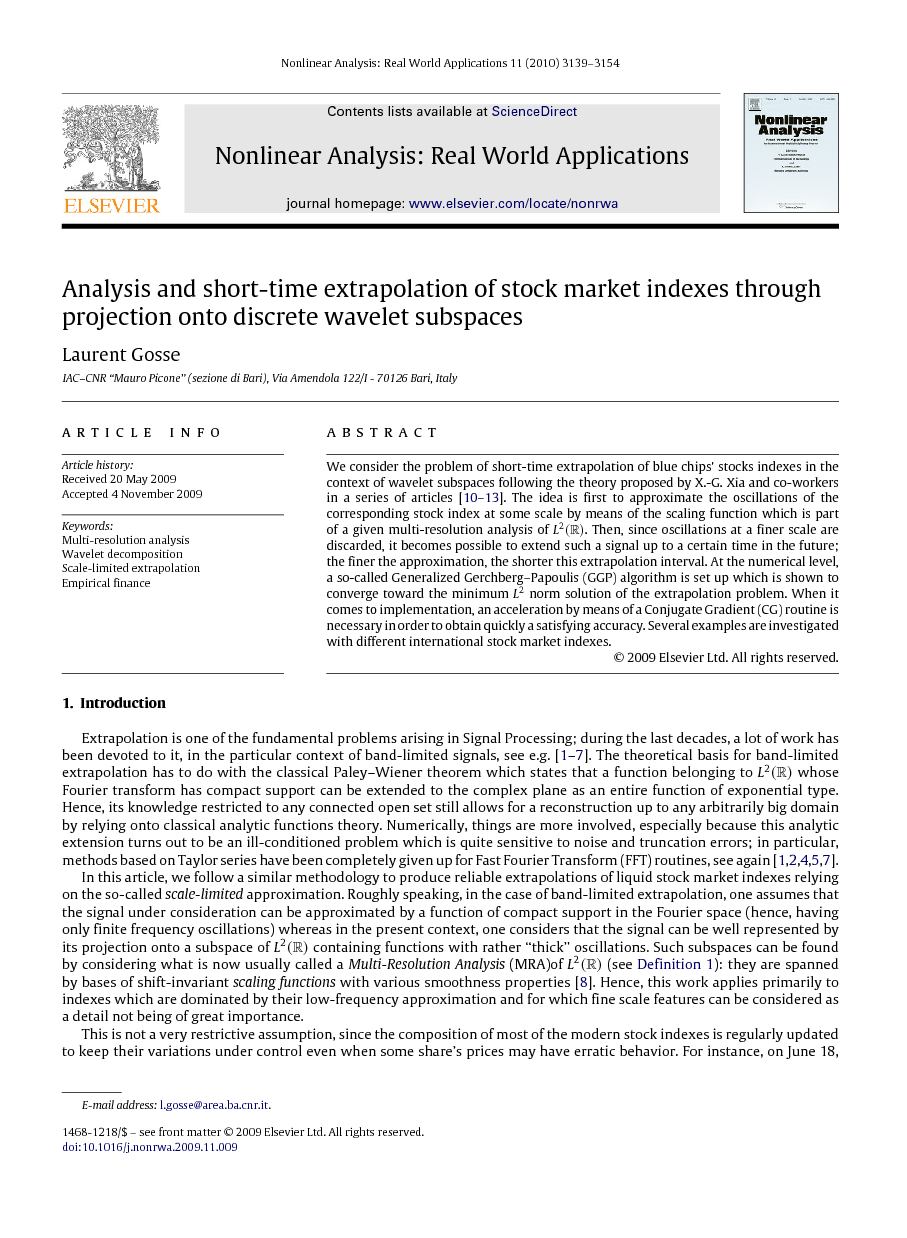 We consider the problem of short-time extrapolation of blue chips’ stocks indexes in the context of wavelet subspaces following the theory proposed by X.-G. Xia and co-workers in a series of articles [10], [11], [12] and [13]. The idea is first to approximate the oscillations of the corresponding stock index at some scale by means of the scaling function which is part of a given multi-resolution analysis of L2(R)L2(R). Then, since oscillations at a finer scale are discarded, it becomes possible to extend such a signal up to a certain time in the future; the finer the approximation, the shorter this extrapolation interval. At the numerical level, a so-called Generalized Gerchberg–Papoulis (GGP) algorithm is set up which is shown to converge toward the minimum L2L2 norm solution of the extrapolation problem. When it comes to implementation, an acceleration by means of a Conjugate Gradient (CG) routine is necessary in order to obtain quickly a satisfying accuracy. Several examples are investigated with different international stock market indexes.

We presented in this article a quite general methodology to handle a standard problem in Empirical Finance, that is, trying to extrapolate stock market indexes during the periods of mild volatility relying on the nowadays well-known theory of multi-resolution and discrete wavelet subspaces of L2(R)L2(R). The numerical results obtained on real-life data coming from daily quotations indicate that this process can be considered as a reliable one, as long as the basic assumption of the relevance of a scale-limited approximation PVjIPVjI of the index II holds. Especially, during strong corrections (like e.g. in October 2008), one notices rather easily that I−PVjII−PVjI ceases to be small and is even not distributed like a standard Gaussian density of the same average and variance. When this “empirical density” is very peaked (like in Fig. 7), the scale-limited extrapolation cannot be taken as a meaningful possible forecast for the index. Concerning the size of the extrapolation interval, it depends on the level of resolution jj of the scale-limited approximation (a lower jj gives a longer extrapolation, but at the price of a poorer accuracy) and on the smoothness of the scaling function (smoother yields a bigger interval). The extreme case being the one of analytic functions from which one can theoretically extrapolate onto the whole real line RR).