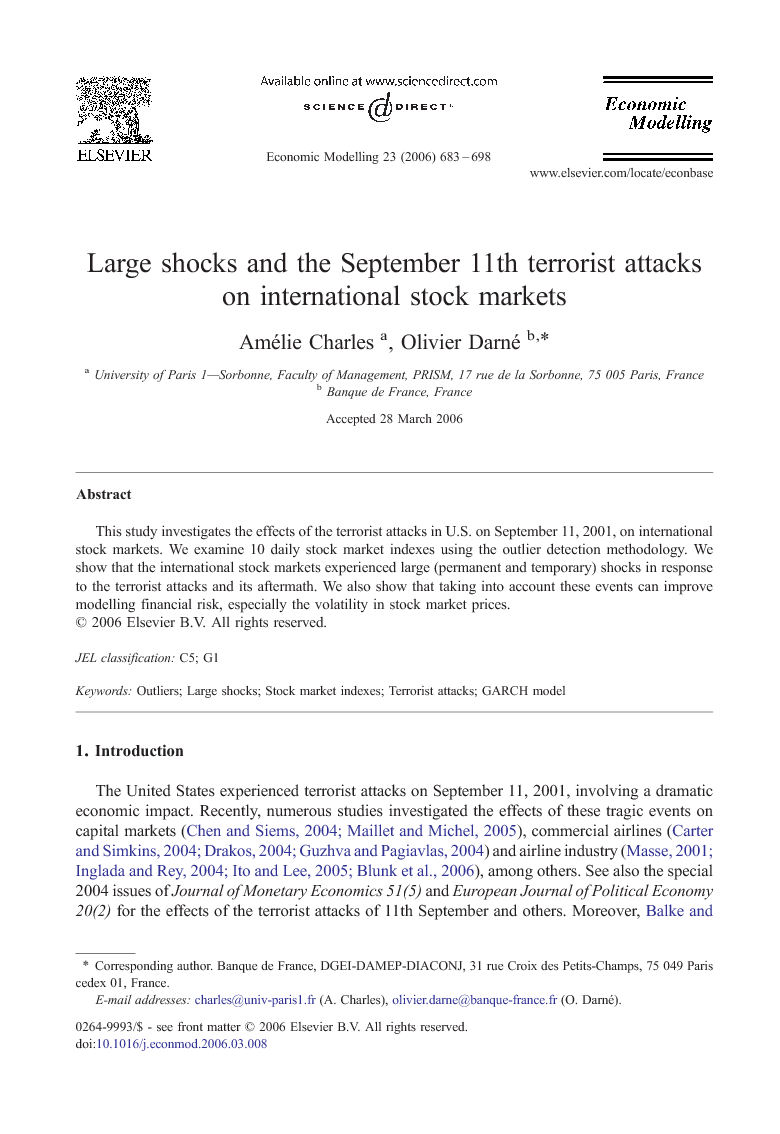 The United States experienced terrorist attacks on September 11, 2001, involving a dramatic economic impact. Recently, numerous studies investigated the effects of these tragic events on capital markets (Chen and Siems, 2004 and Maillet and Michel, 2005), commercial airlines (Carter and Simkins, 2004, Drakos, 2004 and Guzhva and Pagiavlas, 2004) and airline industry (Masse, 2001, Inglada and Rey, 2004, Ito and Lee, 2005 and Blunk et al., 2006), among others. See also the special 2004 issues of Journal of Monetary Economics 51(5) and European Journal of Political Economy 20(2) for the effects of the terrorist attacks of 11th September and others. Moreover, Balke and Fomby, 1991 and Balke and Fomby, 1994, Bradley and Jansen (1995), and Darné and Diebolt (2004) showed that specific events have a dramatic impact on modelling macroeconomic and financial time series. This type of event includes, for example, oil shocks, wars, financial slumps, changes of political regime, natural catastrophes, etc. They applied outlier detection methodology to detect the shocks that affected the economic time series. In this investigation, we study the effects of the September 11, 2001 terrorist attacks on 10 daily stock market indexes using an outlier detection methodology. This methodology allows us to associate the (positive or negative) large shocks due to these events to the presence of outliers, and to seek the type of effects in the form of outliers: immediate, temporary or permanent. We show that the international stock markets experienced large (permanent and temporary) shocks in response to the terrorist attacks and its aftermath, involving abnormal returns.1 This result confirms the tight linkages between the stock markets and the contagion effects of news (Hamao et al., 1990, Arshanapalli and Doukas, 1993 and Hon et al., 2004). As shown recently by Kim, McKenzie and Faff (2004), Flannery and Protopapadakis (2002) and Nikkinen and Sahlström, 2001 and Nikkinen and Sahlström, 2004, we also found that U.S. macroeconomic news announcements can have a great impact on the U.S. and European stock markets by detecting large shocks. These empirical findings give evidence for international transmission of stock prices shocks. Two explaining factors can be highlighted for this increasing international transmission in recent years: (i) the substantial development of technology, which allows traders to transmit information more quickly from one financial market to another, and (ii) the increased flow of capital between countries as a consequence of less restrictive controls on asset market transactions (Booth et al., 1997 and Fernandez-Izquierdo and Lafuente, 2004).2 We also investigate the effects of these events in the form of outliers on the diagnostics of normality from linear and nonlinear modelling. Indeed, high-frequency time series of returns on financial assets typically exhibit excess kurtosis and volatility clustering.3 The Generalized Autoregressive Conditional Heteroskedasticity [GARCH] model introduced by Bollerslev (1986) is frequently applied to describe these two stylized facts (Bollerslev et al., 1992). However, it is often observed that the estimated residuals from a GARCH model still have excess kurtosis (Baillie and Bollerslev, 1989 and Teräsvirta, 1996). One possible cause for this outcome is the presence of outliers that are not captured by a GARCH model (Balke and Fomby, 1994 and Fiorentini and Maravall, 1996). Furthermore, Johansen and Sornette (1998) showed that the largest stock market crashes are outliers and therefore they stressed the danger of amalgamating the existence of large crashes with the existence of a fat tail in the distribution of stock market prices. Moreover, the presence of outliers may have also undesirable effects on the tests of homoskedasticity (van Dijk et al., 2002 and Carnero et al., 2001). The outline of this paper is as follows. In Section 2 we describe the outlier detection methodology. In Section 3 we present empirical results for the 10 daily financial time series. We associate the shock dates with specific events. We examine the effects of outliers on the diagnostics of normality from linear and nonlinear modelling in Section 4. Section 5 concludes.

This study investigated the effects of the terrorist attacks in U.S. on September 11, 2001, on international stock markets. We examined 10 daily stock market indexes using an outlier detection methodology. We showed that the international stock markets experienced large (permanent and temporary) shocks in response to the terrorist attacks and its aftermath. We also found that U.S. macroeconomic news announcements can have a great impact on the U.S. and European stock markets by detecting large shocks. We showed that these large shocks in the form of outliers affected the normality coefficients, and mostly, the evidence for non-normality is reduced after correcting for outliers. Indeed, after correcting the outliers and modelling with GARCH model, the normality is not rejected for nine of 10 international stock market indexes. Therefore, taking into account these events can improve modelling financial risk, especially the volatility in stock market prices.