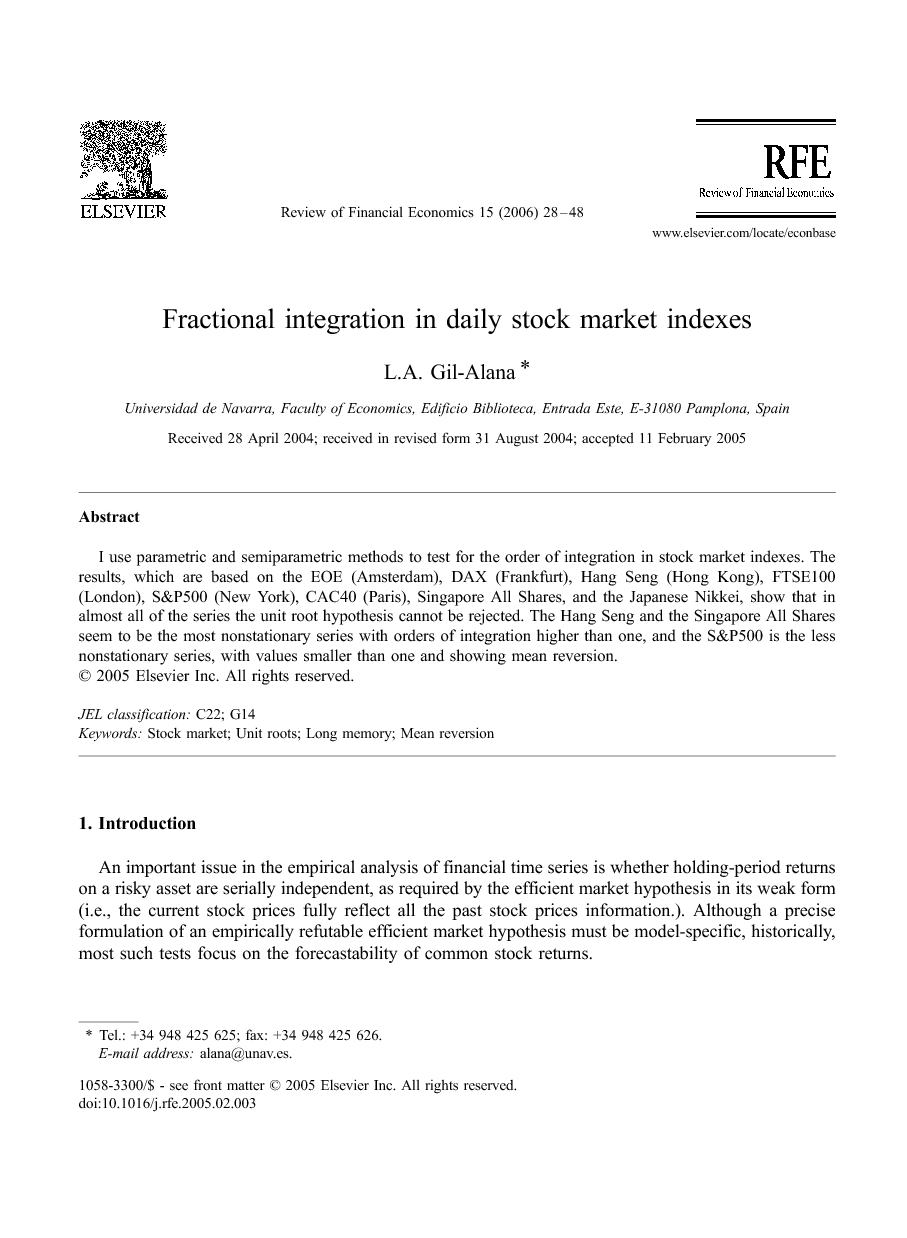 I use parametric and semiparametric methods to test for the order of integration in stock market indexes. The results, which are based on the EOE (Amsterdam), DAX (Frankfurt), Hang Seng (Hong Kong), FTSE100 (London), S&P500 (New York), CAC40 (Paris), Singapore All Shares, and the Japanese Nikkei, show that in almost all of the series the unit root hypothesis cannot be rejected. The Hang Seng and the Singapore All Shares seem to be the most nonstationary series with orders of integration higher than one, and the S&P500 is the less nonstationary series, with values smaller than one and showing mean reversion.

An important issue in the empirical analysis of financial time series is whether holding-period returns on a risky asset are serially independent, as required by the efficient market hypothesis in its weak form (i.e., the current stock prices fully reflect all the past stock prices information.). Although a precise formulation of an empirically refutable efficient market hypothesis must be model-specific, historically, most such tests focus on the forecastability of common stock returns. In this paper I use fractionally integrated techniques to revisit the long memory and mean reversion issues in the stock markets. In particular, I examine if the stock market indexes can be specified in terms of I(d) statistical models, with the possibility that d is a fractional number. For stock indexes, the evidence in favor of long memory may be due to the effect of aggregation. In fact, aggregation is one of the main sources of long memory. The key idea is that aggregation of independent weakly dependent series can produce a strong dependent series: Granger (1980) and Robinson (1978) show that fractional integration can arise as a result of aggregation when: (a) data are aggregated across heterogeneous autoregressive (AR) processes, and (b) data involving heterogeneous dynamic relationships at the individual level are then aggregated to form the time series. Moreover, the existence of long memory in financial asset returns suggests that new theoretical models based on nonlinear pricing models should be elaborated. Mandelbrot (1971) notes that in the presence of long memory, martingale models of asset prices cannot be obtained from arbitrage. In addition, statistical inference concerning asset pricing models based on standard testing procedures may not be appropriate in the context of long memory processes (see, e.g., Barkoulas et al., 2000 and Yajima, 1985). The paper proceeds as follows. In Section 2 I briefly review the literature on modeling stock market indexes using long memory processes. In Section 3 I define the concept on fractional integration. In Section 4 I describe some of the most frequently used techniques for fractional integration, with special emphasis on a parametric and a semiparametric method that have some distinguishing features compared with other methods. In Section 5, I apply these procedures to several stock market indexes. Section 6 concludes.

In this paper I use fractionally integrated techniques to examine the stochastic behavior of several stock market indexes. By using these techniques, I capture the dynamic behavior of the series in a much more flexible way than can those methods based on traditional I(0) and I(1) approaches. I use a parametric testing procedure originally developed by Robinson (1994a) and a semiparametric Whittle estimation method (Robinson, 1995a). I use these procedures because of the distinguishing features that make them particular relevant in comparison with other methods. Robinson's (1994a) tests allow me to consider roots with integer and fractional orders of integration with no effect on the standard null limit distribution. This limit behavior is also unaffected by the inclusion of deterministic trends and different types of I(0) disturbances. In addition, the tests are most efficient when directed against the appropriate (fractional) alternatives. The reason for using the Whittle semiparametric method of Robinson (1995a) is based on its computational simplicity. Also, this method requires a single bandwidth parameter, unlike other procedures that require a trimming number. A FORTRAN code with the programs is available from the author on request. I apply these methods to the daily structure of several stock market indexes, the EOE (Amsterdam), the DAX (Frankfurt), the Hang Seng (Hong Kong), the FTSE100 (London), the S&P500 (New York), the CAC40 (Paris), the Singapore All Shares, and the Nikkei (Tokyo). Franses and Van Dijk (2000) analyze these series in a non-linear fashion. However, there has not yet been a long-memory study of these series that investigates if mean reversion occurs. Moreover, the disparities in capitalization, sophistication, and market microstructure across the eight countries reduce concerns about sample or market-specific results. When I try to summarize the conclusions for the individual series, I find that the order of integration of the Singapore All Shares and the Hang Seng is much higher than one. Thus, for these series I find conclusive evidence against mean reversion, but long memory on the returns. (I note that the order of integration is invariant to the log-transformation of the series.) Moreover, my findings imply that long-range dependence may be a source of long-horizon predictability. Relative transaction costs are greater for trading strategies based on short-term predictability than for those strategies based on long-term predictability. Thus, the long-horizon strategy may represent an unexploited profit opportunity. On the other hand, the S&P500 appears to be the less nonstationary series, with d below one and thus, showing mean-reverting behavior. For the remaining series, (the EOE, the DAX, the CAC40, the FTSE, and the Japanese Nikkei), the values oscillate around the unit root. Clearly, to determine if a small degree of mean reversion occurs, a more careful study of these series should be performed. The fact that some of these series share a common degree of integration provides some support of fractional cointegration, an issue that has not yet been widely studied in the literature to date.